In the course of history, Afghanistan has been crossed by migrations and invading war armies, which has left traces in the composition of the population. Poor communication has helped to give different parts of the country distinctive ethnic and cultural features. The largest and traditionally politically dominant group is the Pashtuns.

The area where most Pashtuns live extends like an arc through the country’s western, southern and eastern parts. The group is almost half the population. In the north there are Tajiks and Turkish-speaking people like Uzbek and Turkmen as well as a small group of Kyrgyz. In the central highlands, the Mongolian Hazars, in the south Baluchs and in the west, semi-nomadic Aimaker lives. 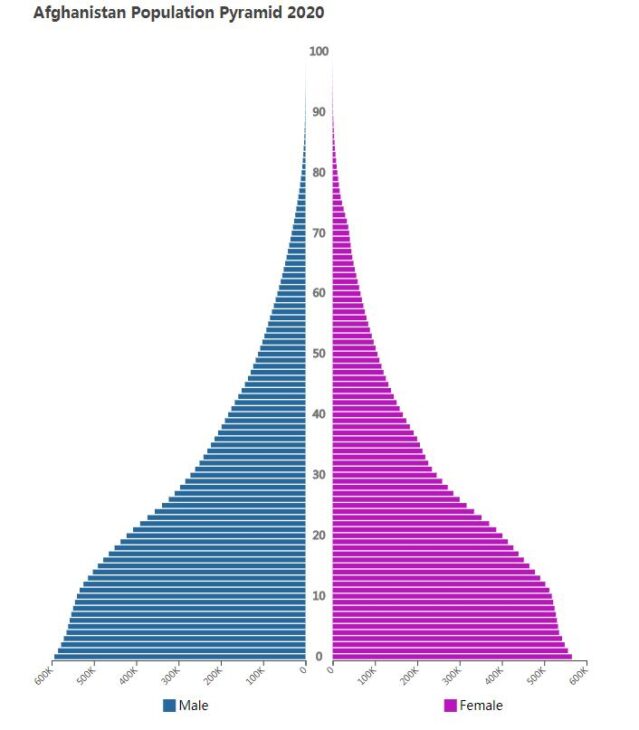 The lack of proper census records and the migrations of the war years makes information about today’s population size uncertain.

The refugee streams have been in waves for the past few decades. During the war against the Soviet Union in the 1980s, more than six million Afghans fled mainly to Pakistan and Iran. After the fall of the Afghan communist regime in 1992, a few million returned to their homeland. Thereafter, continued fighting in the capital Kabul again forced hundreds of thousands of people to flee, partly north of the country, partly back abroad. Many left Kabul after the Taliban seized power in September 1996. After the fall of the Taliban regime in the fall of 2001, a major relocation took place. Between 2002 and 2012, 5.7 Afghans returned to their homeland.

At the end of 2017, the UNHCR estimated that there were about 2.6 million registered Afghan refugees abroad, mainly in Pakistan and Iran. More than one million Afghans are estimated to be in flight under difficult conditions in their own country.

In 2016 and 2017, hundreds of thousands of Afghans returned from countries where they lived as refugees. In 2018, almost 800,000 Afghans returned: just over 746,000 from Iran and just over 31,500 from Pakistan. In the fall of 2018, UNHCR estimated that there were around one million registered Afghan refugees in Iran and perhaps 1.5-2 million Afghans who were living in the country without legal permission. In Pakistan, there were about 1.4 million registered Afghan refugees, according to the UN. Of these, three out of four are born in Pakistan. Many have parents who fled Afghanistan during the Soviet occupation in the 1970s.

In 2017, more than 100,000 Afghans were granted asylum in the EU, the second largest group after Syrians and one fifth of all refugees who received asylum that year. Demands have increased in Afghanistan to take back refugees who have been denied asylum applications in Western countries. Aid and human rights organizations are concerned about sending people back to a country characterized by widespread violence.

At least 1.3 million Afghans were killed during the war until the Soviet Union’s 1989 retreat and perhaps 100,000 people lost their lives during the civil war in 1992-2001. The war against the Soviet Union destroyed parts of the countryside and forced hundreds of thousands of people into the cities. The war on Taliban and other resistance groups has since 2001 demanded the lives of at least 30,000 Afghan soldiers and police, and since the foreign withdrawal at the turn of the year 2014/2015 (see Modern History and Current Policy), 3,000-4,000 civilians have been killed each year in violent acts.

Official languages ​​are Pashto, which is mainly spoken by the Pashtuns, and Dari, which is a form of Persian and which with dialectal variations is spoken by Tajik, Hazar and Aimaker. Dari is also used by pashtuns in Kabul, mainly in management and trade. Both languages ​​belong to the Iranian language group. Other peoples’ languages ​​have official status where they are used.

pashtuner about 50%; minorities of Tajik, Uzbek, Hazar, Turkmen, Aimaker and others

pashto and dari are official languages, in addition, Turkish languages ​​such as Uzbek, Turkmen and Kyrgyz are spoken

The military alliance NATO formally ends its war effort in Afghanistan after 13 years. The NATO-led force consisted mostly of more than 130,000 men. As of January 1, 2015, about 13,000 people will remain, most of whom are Americans.

EU election observers say in their final report that the decisive round of the presidential election (see June 2014) was characterized by systematic high-level cheating. The observers estimate that about a quarter of the votes can be called into question.

US troops may join in battle

Afghan Parliament approves a decision by US President Barack Obama to allow US troops to participate in combat operations also in 2015. Originally, the 9,800 men who remain would then only train Afghan soldiers and fight al-Qaeda, but now they get a more offensive role.

The Independent Organization The Anti-Corruption Monitoring and Evaluation Committee (MEC), funded by the UK and Denmark, writes that President Ghani must dispose of a whole generation of dishonest government officials in order to master the “culture of corruption” that permeates society. Likewise, prosecutors must be provided with effective bodyguard protection to be able to do their job without constant worry of being murdered.

According to the UN, Afghanistan is heading for yet another record-breaking harvest of opium. In 2014, opium was grown on an area of ​​224,000 hectares, an increase of seven percent since the previous year.

Big losses for the army

The fighting with Taliban and other insurgency movements is becoming increasingly difficult for the Afghan security forces. According to Isaf chief US general John Campbell, up to 9,000 Afghan soldiers and police have been injured or killed so far this year. The worst affected are the police corps, which have poorer equipment and operate in more vulnerable situations.

Agreement on US troop presence

The day after Ghani’s take over as president, Afghanistan and the United States sign an agreement to allow about 10,000 US soldiers to remain after the retreat of the international force at the end of the year.

Ghani takes over as president

Ashraf Ghani is installed as president of Afghanistan’s first democratic power shift. At the same time, Abdullah Abdullah takes the oath as “the highest executive official”.

Bloody raids of the Taliban

Taliban are reported to have killed up to 100 people, including civilians and militants, in raids against four villages in Ghazni province. Twelve civilians are said to have been beheaded.

The democratization of settling in confined spaces, following strong pressure from the US and NATO and vague promises that the election results should be published “eventually”, is questioned by a number of political commentators. The Taliban dismiss the deal as a scam, staged by the United States.

Presidential candidates Ghani and Abdullah sign an agreement, under which Ghani becomes president and Abdullah gets a newly created post as “chief executive officer”, comparable to a prime minister. The president continues to be the head of government, but the CEO will lead the government’s weekly meetings. The two of them are given joint responsibility for all important issues regarding the country’s economy and security. The settlement appears to be mainly a result of negotiations, as some votes are not yet published. According to the settlement, the electoral system will also be reformed for the 2015 parliamentary elections and an electronic ID card will be introduced.

Amnesty International criticizes the lawlessness of Afghan civilians who have innocently fallen victim to American and other foreign forces’ warfare. According to Amnesty, at least 1,800 civilian Afghans were killed by the NATO troops between 2009 and 2013, but during that period, only six reports against US military personnel led to the trial.

Following a new mediation by US Secretary of State Kerry, presidential candidates Abdullah Abdullah and Ashraf Ghani agree to form a unifying government, regardless of which of them is declared victorious in the elections.

All votes must be recalculated

US Secretary of State John Kerry comes to Kabul in an attempt to mediate the conflict after the presidential election. After two days of negotiations, Ghani and Abdullah agree that all votes should be recalculated. Both candidates then promise to respect the results announced.

The number of civilian victims is increasing

UN figures show that the number of civilians killed or injured will increase by 24 percent in the first half of 2014 compared to the same period in 2013. During the first six months of 2014, 1 564 civilians were killed and 3,289 injured.

According to the Independent Election Commission, Ashraf Ghani gets 56.44 percent of the vote after the recalculation, while Abdullah Abdullah gets 43.56 percent. The Election Commission points out that the result is preliminary and does not mean that Ghani has been declared victorious. The Commission has decided to extend the voting control to 7,000 polling stations. However, that is not enough for Abdullah, who claims to have won and requires 11,000 polling stations to be examined. The President of the Election Commission admits that there has been extensive cheating with both security personnel and senior officials involved, and that the end result may be different.

Some votes are recalculated

President Karzai signs a number of laws on combating economic crime. The laws have been swiftly adopted by both chambers of Parliament after aging at ministerial level for over a year. Through the new laws, the government hopes to prevent Afghanistan’s banks from being excluded from the global financial system.

The UN may mediate in the election

A few days after the presidential election, candidate Abdullah Abdullah demands that the vote count be canceled. He claims that extensive cheating has occurred, following reports that opponent Ashraf Ghani has taken a clear lead, and says he no longer wants to cooperate with the Election Commission.

Worried about the second round of elections

The second round of presidential elections is held. Nearly 50 people are killed in various kinds of election-related assaults that Taliban are suspected to be behind. Despite the lack of security, according to the Election Commission, more than seven million Afghans participate, of which 38 percent are women.

President Obama announces that the United States plans to retain 9,800 soldiers in Afghanistan after leaving at the turn of the year. They will protect the US Embassy, ​​train Afghan forces and support operations against terrorism.

Afghan army soldiers with NATO air support are reported to have killed at least 60 members of the militant Haqqani network as they attempted to storm army posts in the eastern province of Paktika.

Abdullah gets the most votes

Former Foreign Minister Abdullah Abdullah receives 45 percent of the vote in the presidential election and former Finance Minister Ashraf Ghani receives 31.6 percent. However, nearly half a million votes have been called into question.

Following a bloody election, the presidential election is conducted in surprisingly orderly forms. Despite about 100 attacks around the country, which are reported to have claimed dozens of lives, the day is described as comparatively calm. An unexpectedly high turnout of around 58 percent is seen as a popular manifestation against the Taliban. In 14 percent of the 6,200 polling stations, mainly in the country’s southern and southeastern parts, no voting is possible for security reasons.

At least nine civilians are killed when the Taliban enter the finest hotel in Kabul. Among the victims are four foreigners. The attackers are also shot to death. The same hotel suffered a terror attack in January 2008.

The Taliban threaten the presidential election

The Taliban say they will do everything to disrupt the April 5 presidential election. The leadership calls on its warriors to attack election officials, voters and soldiers who are commanded to protect the polling stations.

Women’s law is being redone

President Karzai orders that a law on women’s rights be revised. The law, which has been approved by both chambers of Parliament, has received harsh criticism from human rights organizations and the governments of other countries. Among other things, family members would not have been allowed to testify against a male relative who has abused a female family member.

Secret talks with the Taliban

A spokesman for Hamid Karzai confirms that since October, the president has been holding secret talks with the Taliban about a possible peace deal.