Since independence in 1991, Armenia has been characterized by emigration caused by poverty and the number of Armenians is steadily decreasing.

During the Soviet era (1920–1991), Armenia was little affected by the migrations that followed deportations and large-scale industrialization in other parts of the Soviet Union.

However, many, perhaps up to one million of the country’s residents, left Armenia from the late 1980s and during the 1990s. Among others, almost all of Armenia’s Azerbaijanis (Azerbaijanis) gave up during the conflict with Azerbaijan (1991-1994). Instead, Armenia received 250,000 ethnic Armenians from Azerbaijan. Even before that, however, over 90 percent of Armenian residents were ethnic Armenians. 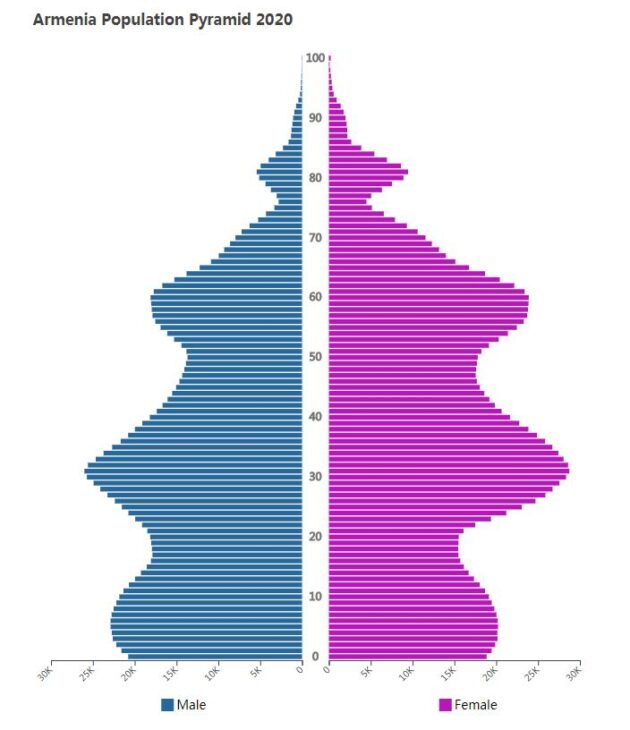 Like most former Soviet republics, since independence in 1991, Armenia has been characterized by emigration caused by poverty and poor living conditions.

Areas outside Armenia historically inhabited by Armenians are located in eastern Turkey and in Iran’s northwest corner. Around Lake Van in Turkey, about two million Armenians lived in the early 1900s; however, they were expelled or killed by the Ottoman army during the First World War. The few Armenians in today’s Iran (perhaps 200,000) and Turkey (even fewer) live mainly in the cities.

Armenian minorities are also found in other countries. One and a half million live in other former Soviet republics, especially in Russia. A politically significant group is the up to 170,000 Armenians living in Nagorno-Karabakh in neighboring Azerbaijan. A few million more descendants of Armenians live in the United States, France and the Middle East. In Jerusalem, there is an old Armenian district.

The country’s official language is Armenian, which forms a special branch of the Indo-European language family. The Armenian has its own alphabet of 38 letters. It was created by the patriarch Mesrop in the 400s and has been of great importance for the Armenians’ cohesion and national identity. Some new letters were later constructed for practical reasons after the language had been developed.

During the Soviet era, Russian was the language of instruction alongside Armenian. Almost half of the Armenians therefore master Russian more or less fluently. More and more are also learning English, especially in Yerevan. Among the minority languages ​​are Kurdish.

Armenian is the official language

At the end of the month, the presidents of Armenia and Azerbaijan meet in Switzerland to discuss Nagorno-Karabakh. The meeting results in a vaguely worded statement of mutual good will. A few days later, a spokesman for the Armenian Ministry of Defense said that there was no longer a ceasefire. He describes the clashes at the border as “open war.” In Baku, an Azerbaijani spokesman says the crimes against the ceasefire are because Armenian forces are illegally located on occupied Azerbaijani soil.

A large majority for constitutional changes

The result in the referendum is preliminary that around 63 percent say yes to the constitutional change. More than half of the eligible voters participate. The opposition claims that there has been widespread cheating and is supported in its criticism by observers from the Council of Europe. According to these, there were, among other things, large-scale voting and that many could vote several times. Parts of the opposition boycott Parliament’s first meeting after the vote, and there are calls for demonstrations. President Sargsyan, who previously said he will leave politics in 2018, now refuses to stick to that promise. The Election Commission unanimously decides that the referendum has been passed correctly and that the constitutional amendment has been adopted.
Support for the constitutional amendment also means, among other things, that the president is to be elected for seven years by an electoral college and that the number of members of parliament is reduced.

On December 6, the referendum to transfer power from the president to the government will be held. President Sargsyan argues that the changes will lead to better cooperation within the government, facilitate economic reforms and safeguard human rights. The opposition fears that Sargsyan has plans to retain power as his presidential term expires in 2018 by becoming Prime Minister.

Constitutional amendments go to the referendum

Parliament votes to organize a referendum on constitutional reform. Several hundred activists protest outside the parliament building and about 20 are arrested on a temporary basis. Critics believe that the proposed constitutional amendments are intended to enable Sargsyan to remain in power by becoming prime minister while shifting power from the president to the prime minister.

Increasing strife at the border

The government says that three Armenian civilians have been killed and two wounded by Azerbaijani fires across the border. Azerbaijan spokesmen do not comment on the shooting deaths, but say that the country’s military responded to the Armenian side. A day later, local authorities in the state of Nagorno-Karabakh outbreak say four of their soldiers have been killed while firing from Azerbaijan. The Armenian Government threatens to henceforth respond to any fire from across the border with artillery and rockets against Azerbaijani military posts and troops.

Russian killer is sentenced, but not for murder

The Russian soldier who murdered a family of seven people in Armenia (see June 2015) is sentenced by a military court in his home country to prison for ten years. However, he is sentenced only for having deviated from his position with stolen weapons. The murder trial is set to take place in Armenia, but it is unclear when it will be released.

The Russian defense force orders a military exercise to show whether the Russian soldiers stationed in Armenia are combat-ready.

Police violence against protesters is being investigated

The government meets protesters at one point and sets up an investigation into police violence, but the day after, the police strike at those who blocked the street near the palace. Up to 50 people are arrested and the barricades in the form of rows of rubbish barrels are demolished. The arrested are released after a short while. The protesters say the protests will continue and the same evening about 1,500 people gather at Freedom Square in the center of Yerevan.

Electric protests are approaching the president

The leaders of the demonstrations against the increased electricity price threaten to move their barricades a little closer to the presidential palace every night until the government bends to their demands. They demand that the latest price increase be revoked, that the current electricity tariff be lowered and that the police officers who are responsible for violence against protesters be punished.

Armenia borrows equivalent US $ 200 million from Russia to buy advanced Russian weapons. The loan will be repaid for 13 years at an annual interest rate of 3 percent. The Opposition Party Cultural Heritage criticizes the government for allowing Russia to withdraw Armenia in a arms race with Azerbaijan, which in 2013 bought Russian weapons for a billion dollars.

The state is taking on electricity price increases

President Sargsyan says that for the time being, the state is taking on the increased costs of electricity supply while the electricity distributor’s economy is being examined. If the audit shows that the increase is reasonable, the public must pay the higher price, he says. But protesters respond by calling for continued protests. The protesters are hearing more and more comparisons with the uprising in Ukraine. Both protesters and the government deny that there would be anti-Russian elements in the protests, but since January relations between Armenia and Russia have been somewhat strained. Then a Russian soldier killed a whole Armenian family of seven people. The Russian government’s decision to put the soldier to justice in his home country spurred anger on the Armenians.

The protests are worrying about Russia

Prime Minister Abrahamyan rejects the demand for the tariff increase to be reversed, but protests continue and more and more are reported to join. The demonstrations also raise concern in Russia, which is reminiscent of how the protests began in Ukraine in 2013. The Russian-owned electricity company in Armenia is led by a man who stands close to President Putin.

When the protests have been going on for just over a week, the number of participants increases to 9,000. The activists, gathered under the name “No for the looting”, use social networks like Twitter to attract more participants and keep the fight glowing. The Russian-owned electricity company says it cannot guarantee continuous electricity supply unless the price is raised. The Armenian economy is strongly affected by Russia’s economic problems.

The announcement that electricity prices will be increased by 16 percent from 1 August leads to widespread protests in Yerevan and clashes between protesters and riot police. Despite the police using water cannons against the protesters and arresting almost 240 people, the protests continue. Hundreds of people spend the night in the center and over 6,000 participate in a demonstration near the Presidential Palace.

The victims of genocide are collectively declared saints

The Armenian Church collectively saints the up to 1.5 million Armenians who are believed to have been killed in the Ottoman Empire during the First World War. The ecclesiastical ceremony takes place the day before the great commemoration in honor of the victims of the massacres, exactly 100 years after the arrests and mass killings of Armenians and other Christian minorities began. Foreign leaders participating in Yerevan Memorial Day include France’s President François Hollande and Russian President Vladimir Putin. In Istanbul, Turkish EU Minister Volkan Bozkir attends a mass in an Armenian church, the first Turkish minister to attend a similar mourning ceremony for the Armenian victims.

The Pope talks openly about genocide in 1915

Pope Francis refers to the mass killing of Armenians in 1915 as “the first genocide of the 20th century “. This is the first time the Catholic Church leaders have publicly used the word genocide in this context. Before becoming pope, however, Jorge Bergoglio spoke several times about the Armenian genocide. His choice of words upsets the Turkish government.

More killed at the front

In the course of two days, two Armenian soldiers are shot to death at the Nagorno-Karabakh frontline. So far during the year, 25 people have been killed on both sides in the ever-fiery conflict.

Obituary for agreement with Turkey

President Sargsyan orders that the protocols to the principle agreement on normalized relations that Armenia and Turkey signed in 2009 should be removed from Parliament, where they have been kept pending formal approval. The peace process was stranded on Turkey’s refusal to recognize the mass killing of Armenians in 1915 as a genocide. Moving protocols from Parliament seems to mean that Armenia is formally suspending the peace process, while preparing the celebration of the 100th anniversary of the mass murders. Sargsyan says that Turkey has not shown political will to deal with its past.

The Armenian Army accuses Azerbaijani forces of having killed two Armenian soldiers at the front along Nagorno-Karabakh. A few days earlier, two soldiers from the Armenian-backed outbreak republic must have been killed.

The Eurasian Economic Union (EEU) enters into force on New Year’s Day. From the beginning, the organization consists of Kazakhstan, Russia and Belarus. Armenia will formally enter into force on 2 January, while Kyrgyzstan will become a full member in May, provided that all its parliaments before finally approve the agreement. In addition to free trade between Member States, the Union includes coordinated financial systems and close cooperation for industrial and agricultural production as well as for the labor market and transport systems. From the beginning, however, wear and tear is noticed between the countries, where Belarus in particular criticizes Russia’s trade policy. Kazakhstan’s President Nazarbayev has expressed concern that Russian policy towards Ukraine could damage EEU relations.