The majority of the population in Azerbaijan is called Azeri, Azerbaijanis or Azerbaijan Turks. They are a Turkish-speaking people of mixed origin. The Azeri historical settlement area extends far into northwest Iran, almost all the way to the Iranian capital of Tehran, but the Azeri central city of Iran is the city of Tabriz. There are many more Azeris – perhaps 20 million – living in Iran than in independent Azerbaijan. 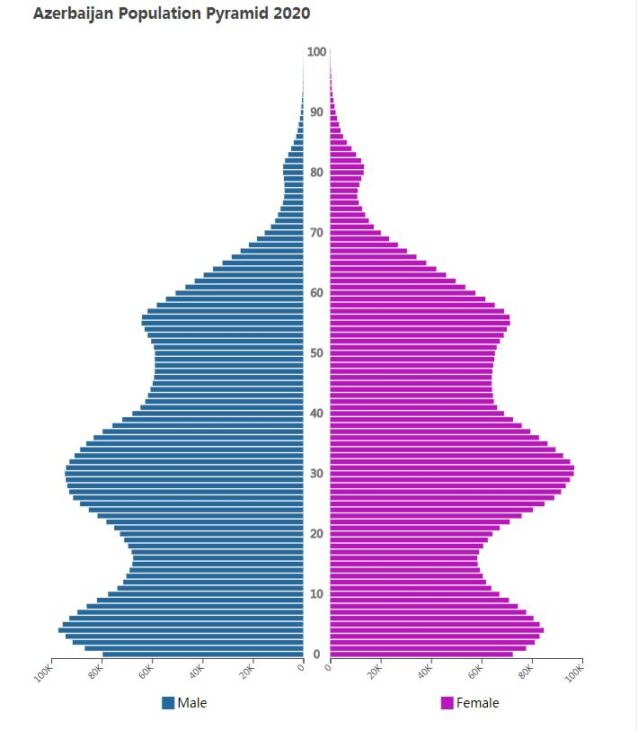 Many Russians who previously lived in Azerbaijan left the country after independence from the Soviet Union in 1991. About other minorities is not very well known. Several small groups speak Caucasian languages, such as the Lezgins, who live in the Northeast as well as in Russian Dagestan. Another Caucasian minority, also represented in Dagestan, is the Avars. The Kurds of Azerbaijan have to some extent been assimilated among the Azeris.

Over 10,000 Chechens fled to Azerbaijan during the Chechen war in 1994–1996 and 1999–2005. Most are believed to have continued to Europe, partly because of the ill-treatment they suffered in Azerbaijan, where the authorities suspected many of being Islamist terrorists.

The official language of Azerbaijan is Azerbaijani (Azerbaijani), which is also the native language of most. In the capital Baku, however, there are Azeri who, far back in time, switched to speaking Russian. Azerbaijani is a Turkish language closely related to what is spoken in Turkey. The difference between Azerbaijani and Turkish is about the same as that between Swedish and Norwegian or Danish.

After using Arabic writing until 1929, the Azeris in the Soviet Union forced the Latin alphabet despite strong opposition from Azeri intellectuals. In 1939 this, in turn, was replaced by the Cyrillic alphabet by order from Moscow.

After independence from the Soviet Union, the Latin alphabet of Turkish model, which since 2001 is the official written language of the country, gradually returned. August 1 is “the day of the national alphabet”.

The leader of an independent domestic election monitoring organization, Anar Mammadlı, is being arrested and prosecuted for tax fraud, illegal business and for spreading false election results. He is to be held in custody for three months until trial. Mammadlı’s organization The Center for Election Monitoring and Democracy Studies revealed a number of cases of irregularities and outright cheating in the October presidential election.

Two men are sentenced to 9.5 and 3 years’ imprisonment, respectively, for being behind the riots in the city of Ismayıllı (see January 2013). A separate trial is underway against two opposition politicians and 16 other persons accused of organizing and participating in the unrest.

A further 10 people are sentenced to imprisonment for between 3 and 10 years for alleged terrorist attacks in connection with the Eurovision contest in Baku 2012. A total of at least 46 people have been jailed following charges of preparing for the attack, as well as against President Aliyev, police stations, hotels where Foreigners usually live, mosques and other shrines. In connection with the arrests, the Ministry of Security claimed that the accused had contacts with Iran.

With immediate effect, the government raises the gasoline price by about 30 percent. The price of gas for delivery to industries almost doubles. The cause is not explained but is believed to be traceable to reduced production.

29 people are sentenced to long prison terms for having planned terrorist attacks in connection with the Eurovision Song Contest in Baku in May 2012. Three of them are sentenced to life imprisonment, the others to between 9 and 15 years.

The Presidents of Azerbaijan and Armenia meet for the first time in almost two years and agree to give fresh momentum to concrete peace talks on Nagorno-Karabakh. Next, the country’s foreign ministers will meet the leaders of the so-called Minsk group within the OSCE, the ambassadors for Russia, France and the United States.

Two prominent regime critics are sentenced to long prison terms for crimes that, according to Amnesty International, are “invented by prosecutors”. Blogger Raşad Ramazanov is sentenced to nine years for drug possession and newspaper publisher Sardar Alibeyli to four years for hooliganism.

The Minister of Defense is replaced

In a government reshuffle after the election, surprisingly, SəfƏr evbiyev, who has led the Ministry of Defense since the mid-1990s, is dismissed. He has been criticized for corruption in the armed forces and for more and more deaths among conscripts. New Minister of Defense will be Zakir Hasanov, who was head of the Ministry of the Interior’s armed forces.

Expected grand victory for the president

In the presidential election, Ilham Aliyev is declared victorious with almost 85 percent of the vote, against 5.5 percent for opposition candidate Cəmil Həsənlı. Aliyev describes the result as a “triumph for democracy” and promises to spend the next term in fighting corruption – which has been described by critics as closely linked to Aliyev’s regime. The opposition claims extensive electoral fraud and says that the result should be appealed to the Constitutional Court demanding that the entire election be annulled. Observers from the European Security and Cooperation Organization OSCE say that the candidates did not have the same opportunity to reach the public and that voting was done very poorly. According to the OSCE, the election has had “significant problems” and highlighted a number of serious shortcomings that Azerbaijan must address.

Hilal Mamedov, editor of the newspaper Tolışi Sədo, language tube for the Iranian minority group of Talyshs, is sentenced to five years in prison for, among other things, treason, incitement to people groups and drug trafficking. He denies the allegations and claims the verdict is political. The newspaper’s former editor died in prison in 2010 after being convicted of espionage on behalf of Iran.

The Election Commission publishes a list of ten candidates for the presidential election, more than at any previous election. However, two of the main opposition candidates have been denied registration and the Council of Europe has regretted the lack of serious contenders for the president in the elections.

Harassment hardens before the election

Human Rights Watch (HRW) accuses the government of intensifying the persecution of oppositionists ahead of the presidential election. In a 100-page report, the organization describes how 39 journalists, regime critics and activists have been arrested or harassed over the past 18 months. According to HRW, the arrests are usually made on extremely loose grounds or on purely fabricated allegations. The harassment has also been accompanied by a series of legislative stricter restrictions on freedom of expression.

The opposition’s first candidate is rejected

A few days later, the Election Commission decides to ban İbrahimbəyov from running for election, citing his dual citizenship. However, Cəmil Həsənlı is approved and registered.

The opposition appoints a reserve candidate

The opposition alliance Milli Şura appoints a reserve candidate for the October presidential election. The historian and former MP Cəmil Həsənlı will represent the alliance in the event that Rüstəm İbrahimbəyov cannot stand. İbrahimbəyov lives in Moscow and fears that he will be arrested if he returns to his home country. He must also resign his Russian citizenship in order to stand for election.

Several thousand opposition activists are allowed to hold a general election in support of presidential candidate Rüstəm İbrahimbəyov on the outskirts of Baku. About ten activists must have been arrested by the police before the meeting.

Amnesty alarms about the arrests

Amnesty International raises alarm that at least 14 democracy activists have been arrested before the presidential election. Among them are a potential presidential candidate, journalists and a number of youth activists. Amnesty calls on the authorities to release them immediately and unconditionally.

Soldier is killed in a fire fight at the border

An Azerbaijani soldier is killed in an exchange of gunfire at the front near Nagorno-Karabakh, the Ministry of Defense reports.

The OSCE is invited to the presidential election

The newly formed opposition front Milli Şura (see May 2013) agrees to appoint author Rüstəm İbrahimbəyov as her candidate in the October presidential election.

Soldier is killed at the border

A soldier dies after being shot at the border of the disputed Nagorno-Karabakh area, which is inside Azerbaijan but controlled by Armenia.

Parliament adopts a law that makes the “abuse” of the Internet and the dissemination of “slander” over the Internet punishable; Violations of the law can result in up to three years in prison. The opposition claims that the law gives the authorities even greater opportunities to silence criticism. At the same time, Parliament extends the maximum period of “administrative arrest” from 15 days to three months. “Administrative arrest” is often used to keep opposition activists locked in without trial or judgment.

The Prosecutor’s Office closes The University of Free Thought (Azad Fikir Universiteti), an educational institution that since 2009 has been aiming to teach democratic values. The university, which is led by a youth organization, has been financially supported by, for example, the United States and the United Kingdom and international organizations.

Editor is imprisoned for extortion

Journalist Əvəz Zeynallı, editor of the Xural newspaper, is sentenced to nine years in prison for extortion. He is accused of demanding payment by a member of the ruling party for not disclosing compromising information about her. According to Zeynallı and several media organizations, the verdict is a political revenge for the newspaper criticizing people in high public standing.

Protests after the death of conscripts

The death of a conscript soldier triggers a series of protests in Baku against conditions in the army. According to the Ministry of Defense, the young man died of a heart attack, but after repeated accusations from his relatives that he had been murdered, the army investigates the incident and seizes four soldiers. Oppositionists claim that the increased tension around Nagorno-Karabakh and the border with Armenia has made conditions in the defense more severe.

Anti-regimental riots erupt in the city of Ismayıllı north of Baku. The unrest is triggered by a tragic traffic accident caused by a hotel owner whose lifestyle and behavior must have long annoyed city residents. Since he is associated with the regime, the demonstrations quickly turn into general protests against corruption and injustice under the Aliyev family. The protests are quickly knocked down by the riot police but spread to Baku, where about forty people are arrested, including a well-known blogger, a human rights activist and a journalist.

21 men are fined up to the equivalent of about SEK 5,000 per person for participating in an illegal gathering. They are the first to be convicted under the stricter law that was passed in November 2012 and came into force at the turn of the year. They were arrested during protests in Baku against the fact that conscripts are subjected to violence in the army. A young soldier had died a few days earlier.