Bangladesh is located in South Asia on the Bay of Bengal, between India and Burma. The country became independent from Britain in 1947, and was initially the province of East Pakistan in the newly formed Muslim state of Pakistan. The country was divided in 1971, when East Pakistan broke away from the federal state and formed the Republic of Bangladesh. 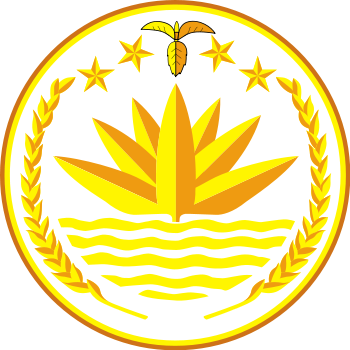 The Bengalis in eastern Pakistan believed that western Pakistan was exploiting the eastern part of the country, and in early 1971 they revolted, leading to fierce fighting. The revolt was crushed by government forces, and nearly six million people fled from East Pakistan to India. India protested against the economic burden and accused Pakistan of brutality. Pakistan, for its part, criticized India for interfering in the country’s internal affairs.

In 1974, Bangladesh was recognized by Pakistan, whose leader Ali Bhutto visited the country later that year as a sign of normalization of relations. That same year, the country’s fragile economy suffered a devastating blow. A large-scale flood disaster followed famine and growing anarchy. In 1975, a new constitution was adopted under which Mujibur Rahman became president. At the same time, one-party systems were introduced. In August 1975, the president and his family were killed in a military coup led by a group of right-wing officers. Two years of chaos with several military coups followed. Political stability has stabilized since General Ziaur Rahman was appointed president in 1977. Opposition parties were again allowed, and parliamentary elections took place in 1979, resulting in a civilian government. However, the president remained the most powerful factor. After a good harvest in 1978, the economy improved somewhat,

Bangladesh is not only one of the poorest countries in the world but also one of the most densely populated. In an area that corresponds to about a third of Sweden, just over 145 million people live (2007). About 60 million are considered poor and survive on less than $ 1 a day. Most live in the countryside and support themselves on agriculture.

Bangladesh is a Bengali word meaning “Land of Bengal”.

The following objects in Bangladesh are listed as a UNESCO World Heritage Site.
The year in which the item was added to the list is indicated in parentheses.

Electricity and electrical outlets in Bangladesh

Chittagong is the second largest city in Bangladesh and is located in the southeastern part of the country at the mouth of the Carnaphuli River at the Bay of Bengal. The city has just over 2.5 million residents (2007), and just over 3.7 million residents in the entire metropolitan area.

According to Countryaah, Dhaka is the capital of Bangladesh. It is also the administrative capital of both a province and a district bearing the same name as the city. The city, Dhaka City Corporation, has about 6.7 million residents. The entire metropolitan area, Dhaka Statistical Metropolitan Area, which includes the cities of Narayanganj and Tongi has about 12, 2 million residents. Dhaka is Bangladesh’s industrial, commercial and administrative center.

Under the rule of the Mughal Empire in the 17th century, the city was also known as Jahangir Nagar and was then the province’s capital. The modern city developed mainly under British rule in the 19th century, and soon became the second largest city in Bengal after Calcutta. In connection with the partition of India in 1947, Dhaka became the administrative capital of East Pakistan, and later, in 1972, the capital of independent Bangladesh.

Rajshahi is the fourth largest city in Bangladesh and is the administrative capital of the province of Rajshahi. The city has 727,083 residents (2007), and is located on the Ganges in the western part of the country, on the border with India.