Two out of three Bangladeshi people live in rural areas, but more and more people are moving to cities where slums are growing rapidly. The capital Dhaka is a giant city in an urban region with a population of over 17 million people. 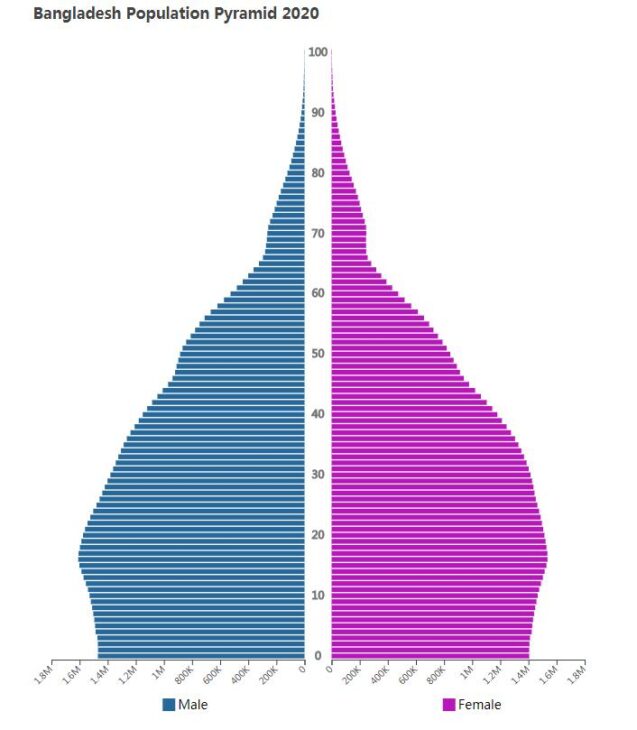 Almost the entire population is Bengal. It is a people group that speaks Bengali (see below) and mainly exists in the historical area of ​​Bengal which is now shared between Bangladesh and the Indian state of West Bengal.

A large minority group is the Bihars, who came from the Indian state of Bihar at the partition of India in 1947. They, like the Bengals, are Muslims but speak Urdu, the official language of Pakistan. The Bihars supported West Pakistan during the civil war in 1971 (see Older History) and were therefore unpopular in Bangladesh after independence that year. The Bihars remained stateless and have lived in refugee camps for decades under difficult conditions. In 2008, the Supreme Court ruled that all bihars who were minors or not yet born in 1971 are entitled to citizenship. It is estimated to comprise about half of the approximately 300,000 beehives in the country.

In Bangladesh there are also many ethnic groups of Tibetan Burmese origin, such as chakma, marma, tripura, mandi and santal. In total, they make up over a million people. Most are in the Chittagong Hills area in the southeast and go by the collective name Jumma. Ever since independence, Jumma has been in conflict with the government. Under the leadership of the Chakma people and the guerrilla Shanti Bahini (Peace Force), they have protested against the move of Bengali settlers and demanded self-determination. Several thousand people have been killed and many more have moved across the border to India. In 1997, a peace agreement was signed that would give the local people some autonomy. Most of the refugees have since returned. But tension remains in the area and the government is accused of failing to fulfill the promises made in the peace agreement.

The official language is Bengali (or Bangla). It is an Indo-European language that is one of the world’s largest native languages, and closely related to Hindi. More than 95 percent of Bangladeshi speak Bengali. The others speak Urdu, which is close to both Hindi and Bengali, or some Tibetan Burmese language. The well-educated part of the population also speak English.

Bengali is the official language, in addition to spoken Urdu, English and Tibetan Burmese languages

The Islamist party Jamaat-e-Islami carries out a general strike in protest of ICT’s trials against its leaders (see November 2011 and May 2012). At least one person is killed in rattlesnakes following the strike.

A fire in a textile factory on the outskirts of Dhaka harvests over 100 lives. Demonstrations with demands for increased safety in the textile industry follow.

ICT is prosecuting both the former and current leader of Jamaat-e-Islami, Ghulam Azam and Motiur Rahman Nizami, for crimes that must have been committed during the War of Independence.

The opposition is gathering

The BNP forms an opposition alliance with 17 other political parties, including Jamaat-e-Islami.

GDP organizes the largest demonstration since the 2008 elections, with continued demands that the system of a transitional government before parliamentary elections be reintroduced.

The army claims to have warded off plans for a coup that should have involved 16 Islamist officers.