Three population groups dominate Bhutan: ngalong, sharchop and lhotshampa. The Tibetan-beaten Ngalong is the most influential politically and culturally, while the civilian status of the Nepalese Lhotshamps is an infected issue.

Information on the number of residents of Bhutan has varied greatly. A few years before the entry into the UN in 1971, the country’s first census was held, showing nearly one million residents, which was the basis for estimates of more than two million after the turn of the millennium. But in a 2005 census, the result was 672,000, which has generally been accepted as a correct figure. At the 2017 census, the country had just over 727,000 residents. 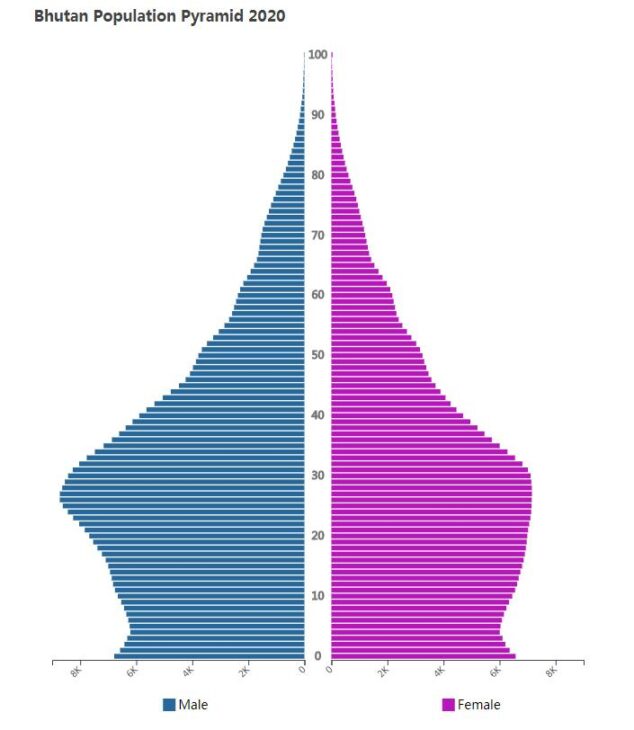 The population figure is presumed to have risen earlier in an attempt to strengthen respect for the small country and provide more assistance. The conflict over residents of Nepal has also complicated the picture (see below).

Ngalong, sharchop and lhotshampa make up perhaps 85 per cent of the population, although there are no exact figures. In addition, there are a number of smaller groups of people, sometimes called indigenous people.

Ngalong (also called ngalop or bhutia) is probably the smallest of the three main groups, but dominates both politics and culture. They live mainly in the central and northwest parts of the country. Ngalong is of Tibetan origin and speaks dzhongkha.

Sharchop in the east is believed to have originated in northeastern India or Myanmar (formerly Burma) and speaks tshanglha. They have to a large extent been assimilated with ngalong.

Lhotshampa means “those from the south” or southern Bhutanese. They are descendants of Nepalese who came to southern Bhutan in the late 1800s to farm the land. Immigration continued for most of the 20th century, but the Nepalese usually lived separated from the peoples of the mountain areas in the north.

During the 1980s, new laws were passed which resulted in many Nepalese being deprived of the right to citizenship. Perhaps one-sixth of Bhutan’s residents were affected. The contradictions hardened (see Modern History) and during the 1990s tens of thousands fled or were displaced to Nepal where they ended up in refugee camps. There they remained until the United States and other Western countries offered a sanctuary. Between 2007 and 2019, more than 110,000 Bhutanese were moved to third countries, but there were still about 6,500 lhotshampa left in two camps in Nepal. As the program to relocate to third countries expired at the end of 2019, this group had to choose between staying in Nepal or moving back to Bhutan. Among those who remain in Bhutan, there are many who still lack citizenship.

All non-Nepali people in Bhutan are sometimes called a common name for drowning.

Previously, the country had three official languages: dzongkha, english and nepali, but since 1988, only dzongkha is national language. Dzongkha and tshanglha are Tibetan Burmese languages, while Nepali is Native American. There are another 20 languages ​​spoken in the country.

dzongkha is the official language, otherwise spoken in English and Nepali