More than two-thirds of Myanmar’s residents are counted as the majority of Burmese people. About 30 percent of the population belongs to about 100 officially recognized national minorities. In the state of Rakhine, there is the Muslim minority Rohingya, who has been persecuted by the regime since the 1960s, who see them as a foreign people who are therefore not granted citizenship.

Data on the number of residents and other population statistics in Myanmar are often uncertain. This is partly due to the fact that many Myanmarians have moved or work abroad. When the first census of over 30 years was carried out in 2014, the population of just over 51 million stopped, which was around 9 million fewer than expected. The lower figure is partly due to the fact that birth rates have decreased more than the authorities had realized, but one reason is also that at least 800,000 Rohingy were not counted because they are considered stateless (see Rohingy situation). The scope of other minority people is also believed to have been underestimated, as some live in troubled areas where the authorities could not go. 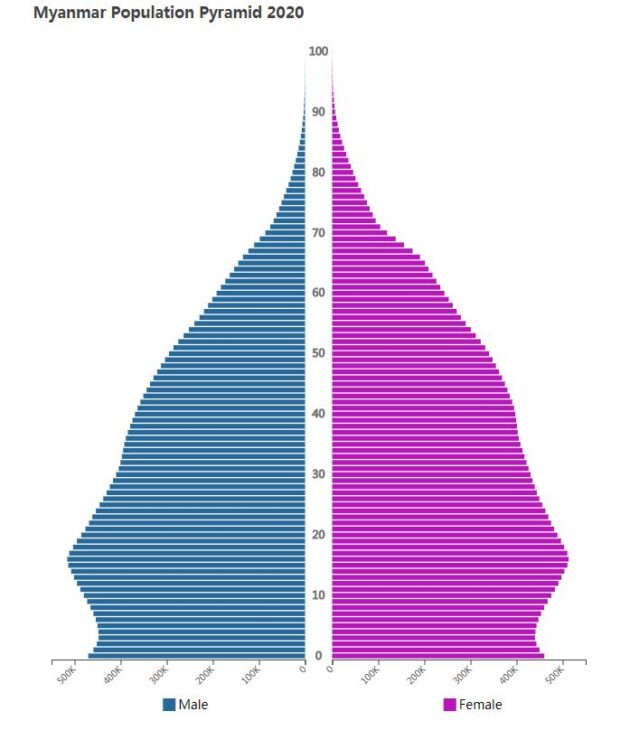 More than a quarter of the Myanmarians are under 15 years of age and about one in 20 are 65 years of age or older. A large part of the population, mainly Burmese, live in the fertile lowlands of the central plain around the Irrawaddy and Sittang rivers. It was after this people group that the country got its former name Burma. In the Landguide, the term Burmese refers to the majority people, while Myanmaris refers to all residents of the country irrespective of ethnic origin.

In 1989, the then military regime changed its name from the country, from the Socialist Republic of Union Burma to Union Myanmar. The old name of Burma was considered to discriminate against non-Burmese residents. However, the democracy movement and many countries around the world stuck to the name Burma when Myanmar became associated with the regime. In line with the democratization of the 2010 century, the name issue has lost its political charge and now Myanmar is a common occurrence. Like many Swedish media, the Country Guide has chosen to switch to calling the country Myanmar. Also the spelling of cities and certain people groups changed in 1989 and in these cases the new spelling is indicated in brackets.

The largest among the many minority people is shan, who lives in the valleys of the high plateau in the east. The second largest minority, karen (kayin), is found partly in the delta of the Irrawaddy River southwest of the city of Rangoon (Yangon) and partly in the border mountains to Thailand in the east. The Arakanes (rakhine) live in the state of Rakhine, which lies on the coast to the west and borders Bangladesh in the north.

The Rohingy in Rakhine speak their own Arakanese dialect, which is mixed with Bengali and Persian. In recent years, discrimination against Rohingya has grown into one of the country’s most serious problems. The military offensive from the fall of 2017 that drove more than 750,000 Rohingy people out of the state has been designated by the UN as ethnic cleansing. The UN has described the Rohingya as one of the world’s most persecuted minorities. They are not allowed to leave Rakhine without permission or even move freely within the state. In some areas of Rakhine, the Rohingy must request permission to get married and must not have more than two children. Rohingy are also often used for forced labor. Since 2012, around two-thirds of Myanmar’s approximately 1.5 million Rohingy have been expelled from the country.

Other peoples are chin along the border with India, kachin and naga in the mountains at the far north, karenni (kayah) just north of the Karan area at the Thai border and along the coast at the bottom in the southeast. Especially in the Shan people’s area of ​​the Northeast, there are mountain people such as wa, lahu, akha, pa-o, palaung and a host of other smaller peoples. The Wa people account for a large part of opium handling.

Among foreigners, notably Chinese and Indians, who often dominate business in the cities.

When Myanmar became independent in 1948, the new government failed to resolve the issue of minority rights. In principle, the minority people have nothing to say about society and are financially disadvantaged. They have much less access to education and care than the Burmese. The military regime’s policy towards the minority people led to extensive emigration to neighboring countries and to large internal refugee flows.

Various armed movements have since struggled for some form of self-government. The country has therefore more or less been in civil war throughout its modern history.

The language of the majority, Burmese, is the official language. Together with Tibetan, it forms the backbone of the Tibetan Burmese language group. This also includes several of Myanmar’s minority languages: Arakanese, karen, karenni, kachin and chin as well as some minor languages. Mon, Palaung and Wa belong to the monk Khmer language group and are thus related to Khmer, the main language of Cambodia. Shan is a Thai language, closely related to Thai and Laotian.

Almost all languages ​​are written with an alphabet, which, with some modifications, is based on the mon people’s writing – which in turn has been inspired by South Indian writing. Christian missionaries introduced the Latin alphabet in the 19th century to write kachin, chin, and wa. English is widely used in business and administration.

Read more about the conflicts with other minority people here.

NDL leader Aung San Suu Kyi is sentenced to three years in prison for violating the house arrest rules. In May 2009, she let an uninvited American man stay overnight after moving to her barred home by swimming across a lake. The sentence is converted to 18 months’ continued house arrest. The American is sentenced to prison but expelled instead.

Military offensive against the karangillan KNU

A military offensive against the karangillan KNU drives thousands of civilians to flee into Thailand.

One year after the devastating cyclone Nargi’s progress, the junta finally lets in the UN personnel needed to help the victims. According to the UN, hundreds of thousands of people are still in need of relief.

The NLD sets conditions for participating in elections

The NLD offers to participate in the political process and stand for election if the regime releases all political prisoners, changes the new constitution and allows international election observers.

Hundreds of Rohingy, a persecuted stateless Muslim minority, are trying to flee by boat to Thailand, where the authorities do not allow them. Many people then resort to Muslim Indonesia instead.