In just under half a century, China has more than doubled its population. China is today the world’s most populous state with close to 1.4 billion residents – about one-fifth of the world’s population is Chinese. The long-standing and much-debated one-child policy has now ceased and it is permissible to have two children.

Population pressure has long worried China’s leaders, who by various means tried to persuade or force the residents to give birth to fewer children. Forced sterilizations and abortions have been dark elements of China’s family policy. The one-child policy, which began in the early 1980s, meant that couples who provided more than one child often lost community benefits and had to pay penalty fees. An exception has been the minority people who were allowed to give birth to more children and later two children were also tolerated in families in the countryside if the first child was a daughter. 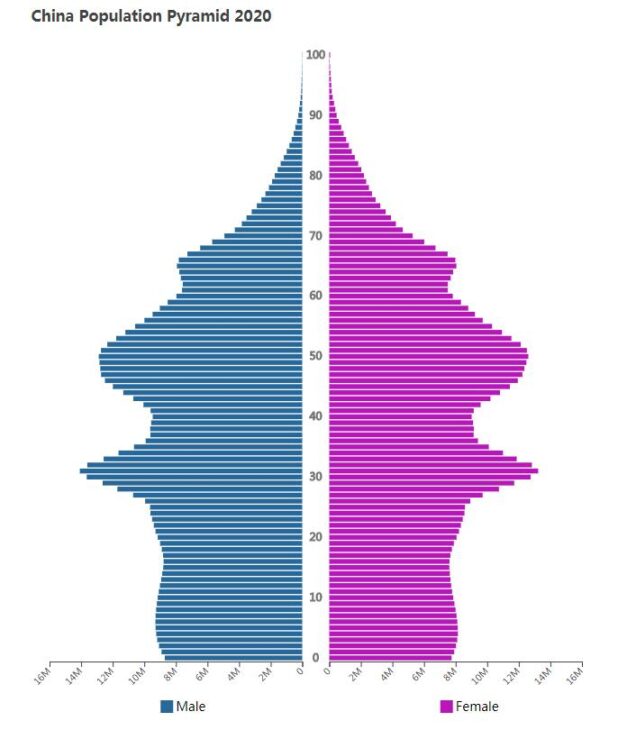 During the first years of the 2000s, many couples, with both parents being the only child, were given the right to have two children and in 2013 the ruling Communist Party decided to further tighten the rules. The purpose was to remedy the negative consequences that politics brought.

Although the one-child policy contributed to the population growth, which was around 3 percent in the 1970s, it also fell sharply, it also led to imbalances. Statistically, the proportion of newborn boys was abnormally high in China, in 2004 the difference was record high with 121 boys per 100 girls, and the imbalance continued even in the following years. At the end of the 2010s, according to official statistics, there were 33 million more men than women.

Old tradition of valuing boys higher than girls has contributed to the oblique distribution. Further back, there were murders of newborn girls. In recent times, access to ultrasound diagnostics has sometimes caused abortion of girl fetuses.

A few years into the 2000s, another negative effect of the one-child policy also received increasing attention – the problem of the aging population. Low birth rates mean that the proportion of old people is increasing steadily, while the number of Chinese working-age is decreasing. The change is expected to be a major burden not only for pension systems and the elderly, but for the economy as a whole. By 2050, one third of the population is estimated to be older than 60 years.

In the fall of 2015, it was announced that it would be allowed for couples to have two children. But the abolition of the one-child policy did not lead to a significant increase in the number of births. On the contrary, at the end of the 2010s the birth rate decreased. According to the assessors, it was considered that it was accepted to have only one child together with high costs associated with having children. One-child policy has also in itself meant that the number of women of childbearing age is not sufficient to maintain a stable population development (for this the fertility rate needs to be around 2.1 (reproduction level). Experts have therefore warned that China’s population will decrease and the consequences of that.

In recent years, migration from the countryside to the cities has accelerated. Today, well over half of China’s residents live in cities. But the Chinese leadership wants urbanization to go even faster to benefit domestic consumption in the country and thus economic growth. City dwellers consume more than farmers in the country, they reason. According to official forecasts, seven out of ten Chinese will live in the cities by 2035.

One problem associated with urbanization has been the country’s criticized system for household registration, hukou. Residents have been registered as rural or urban residents, based on place of birth. It has hit hard on many migrant workers from the countryside, in 2017 they were estimated at about 280 million, who went to the cities in search of jobs. Since they are still registered in the country, they are not covered by the same rights, including education, housing and health care, as registered urban residents. From the mid-2010s, reforms have been initiated by the hukou system, which has meant that more migrant workers have been granted housing permits and the opportunity to access community services. But the possibilities of obtaining housing permits vary greatly between different cities; smaller and medium-sized cities are about to completely phase out the hukou system,

Of the population, he calls himself about 92 percent, equivalent to Chinese. The others are distributed among 55 minority people, of whom 18 comprise more than one million people. The biggest is zhuang, which counts over 16 million. Other large groups are Manchus, Hui (Muslim Chinese), Miao, Uyghurs, Yi, Mongols and Tibetans. Minorities usually have different religions and languages ​​than the Chinese. Although they have a formally recognized special status, they have occasionally caused central government problems by demanding greater independence or protesting Chinese dominance in their territories. Violent revolts have occurred in Tibet and Xinjiang (see Tibet and Xinjiang, respectively).

Outside the country, there is a “second China” – millions of Chinese living in Taiwan, the United States, Canada, Singapore and a number of other countries, mainly Southeast Asia.

Chinese is the world’s largest language and, like most Indochina languages, is considered the Sino-Tibetan language family. It is characterized by unanimity, where a syllable equals a concept and – in the case of the Chinese – with a writing character. Different ways of intonating can give the syllables completely different meanings. The dialects vary greatly within the country. About 70 percent of the population, mainly north of the Yangtze Valley and in the west and southwest, speak the so-called Mandarin dialects which do not differ so much. Of these, the Beijing dialect has been made the official national language, putonghua.

South of Yangtze, the deviations are larger. The Shanghai dialect is very difficult to understand for a Beijing resident, and the dialects further south are completely incomprehensible to a North Chinese. In principle, everyone whose dialect deviates from the Chinese language has to learn putonghua as other languages.

The problems relate to pronunciation – the Chinese signature is a culturally unifying factor. The characters indicate the meaning of the word and not its pronunciation. The same text can therefore be read all over China, although the characters would be quite different. In today’s Chinese, a maximum of 10,000 characters are used. For ordinary newspaper and book reading it is sufficient to be able to use 2,000-3,000 characters. More advanced texts may require knowledge of twice as many. In the 1950s, the communist regime introduced a simplified writing system to help the poor masses learn to read and write. Nowadays, about 2,000 simplified characters are used.

A uniform alphabetic audio script, pinyin, has since 1979 replaced old Western systems for translating Chinese words and names into the Latin alphabet. This text uses pinyin – with some exceptions. If pinyin is applied consistently, for example, China’s capital should be written (and pronounced) Beijing, but here the traditional Swedish writing Beijing has been retained. Tibet has also retained its old Swedish name.