When Cyprus became independent in 1960, the Christian Greek Cypriots and the Muslim Turkish Cypriots lived fairly evenly throughout the island. Cities and villages usually had a mixed population. The unrest in the 1960s led the two groups to move apart and settle in separate enclaves. 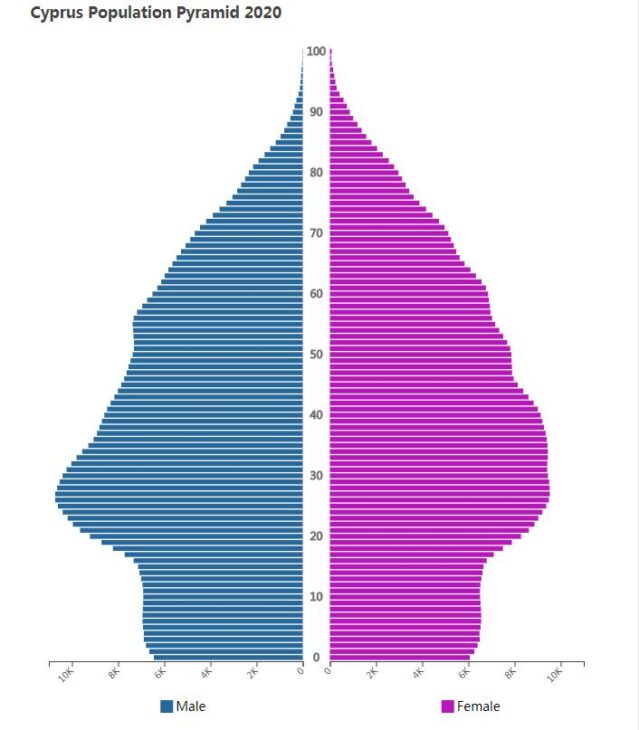 The last census covering all the residents was carried out in 1973. The Greek Cypriots then constituted, in round numbers, four fifths of the country’s population and the Turkish Cypriots one fifth. Probably, the distribution between Greek and Turkish speakers has not undergone any dramatic change since then. However, many Turkish Cypriots, perhaps a third, have emigrated, especially to the UK. Instead, perhaps 100,000 immigrants (the exact figure is unknown) have come to Northern Cyprus from Turkey; most came in 1975 and 1976. Greek Cypriot authorities regard these immigrants as illegal and disregard them in their population statistics, which also omit Turkish soldiers in northern Cyprus.

At a census in the south of 2001, 690,000 residents were registered on that part of the island. At the same time, Greek Cypriot authorities estimated that the number of residents in the north was 88,000 (excluding Turkish immigrants), while Turkish Cypriot authorities estimated that Northern Cyprus had 211,000 residents (including Turkish immigrants). UN Population Fund UNFPA estimated the entire population of Cyprus in 2008 to be 864,000 people.

A census in 2011 indicated the number of residents in the Greek part of the island at just under 839,000. The rapid increase over the last ten years was mainly explained by an increase in immigration. More than 21 percent of the population were described as foreigners. At about the same time, a census was carried out in the Turkish part, according to which there were almost 295,000 people living there. However, the task was strongly questioned, as most had expected a significantly higher figure and suspected that the local authorities wanted to reduce the move in from Turkey.

Official estimates from 2013 claimed that the Greek Cypriot portion had 858,000 residents.

Among smaller people groups are Armenians and Maronites. Since both of these groups are Christians, when Cyprus became independent, they chose to be considered Greek Cypriots in political contexts.

Greek and Turkish are state languages ​​in each part of Cyprus. English has retained its importance as a language of access and is also often used as a management language.

İrsen Küçük from UBP is commissioned by President Eroğlu to form a new Turkish Cypriot government. The continued negotiations during the year will be unsuccessful.

Derviş Eroğlu from UBP is elected Turkish Cypriot president with 50 percent of the vote, against 43 percent for Talat. The election results make negotiations on the island’s reunification more difficult.

Resolution against the guarantee powers

The Greek Cypriot parliament adopts a resolution to keep Cyprus’s guarantee powers – Greece, Turkey and the UK – out of the negotiation process. The decision is believed to be directed mainly at Turkey, which, in Greek Cypriot view, appeared as if the country had been a party to the negotiations.

Problems in the negotiations