In East Timor, natural Population growth is high. About four in ten residents are under 15 years of age. Ethnic diversity is great. Most residents belong to some Austronesian or Papuan people.

The number of residents has varied considerably over the past 40 years. Before the Indonesian invasion of 1975 (see Modern History), there were approximately 650,000 residents. Of these, an estimated between 100,000 and 200,000 died as a direct or indirect (disease and starvation) following the invasion and occupation. 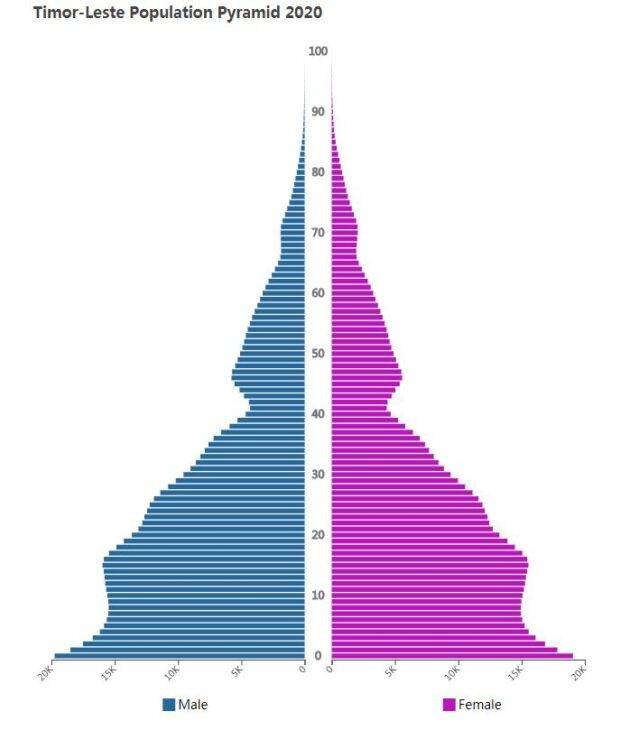 The number of deaths varies between different sources. The Independent East Timorese Truth and Reconciliation Commission appointed in 2002 states that up to 183,000 East Timorans died as a result of the occupation.

Only in the 1990s did the population again rise – partly as a result of a large influx of Indonesians (see below) – to drop drastically again in 1999. During the wave of violence in connection with the referendum on independence that year, half a million people were forced to flee (see Modern History). At least 250,000 of them fled or were displaced by Indonesian-friendly militia groups to West Timor, the others sought shelter in the East Timorese mountains. Since then, more than 220,000 of the refugees in West Timor have returned home. The remaining ones chose to stay in Indonesia permanently.

A large majority of East Timorese belong to any of the ethnic groups atoni, belu, tetum, galoli, nambi, tocode, fatalucu, makasae, madiki, idate, mambai, bunak or kemak. Most of these are Austronesian people, but some are Papuan. The largest groups are atoni, belu, tetum and mambai.

Atoni is believed to be descended from Aborigines who migrated from Australia. Atoni probably first came to East Timor and now lives mainly in the central mountain areas. Belu lives on the south coast.

In the past, Indonesians that made up about a fifth of the population. Immigration took place during the Indonesian occupation (1975–1999), when the Suharto regime encouraged people from other parts of the island world to move to East Timor. The immigration of Indonesian civil servants, businessmen and settlers created tensions between the Muslim Indonesians and the East Timorese Christians. One reason was that the Indonesians competed for agricultural land, which is a scarcity in East Timor. During the 1999 wave of violence, most Indonesians fled East Timor.

About two percent of the population belongs to a Chinese minority. The Chinese came to East Timor in the 16th century, when Portugal colonized the area. They settled in the cities and depended on acting as an intermediary in the trade between the peasants and the Portuguese. Even today, most Chinese live in cities, while a large majority of East Timorians live in rural areas.

There are shared opinions on how many languages ​​are spoken in East Timor: the data vary between 15 and 30. The largest local language, tetum, has in a simplified form developed into an East Timorese lingua franca (language used between people with different languages) and spoken of around 90 percent of the population. Most East Timorese languages ​​belong to the Austronesian language family, but Papuan languages ​​also exist.

More than half of the East Timorese, especially the young, can also speak Indonesian, which during the occupation was the official language and teaching language. Some older East Timorians know Portuguese, which is also the language of the political and social elite. Most people in the core of the resistance movement during the Indonesian occupation were Portuguese-speaking, as were many in the current political leadership. More than a fifth of the residents speak Portuguese.

Within the Chinese people group, Mandarin and Cantonese are spoken. Since independence in 2002, Portuguese and Tetum are official languages, while English and Indonesian are classified as so-called working languages ​​and can be used, among other things, in the education system.

vast majority of Austronesian or Papuan origin, minorities of Indonesians and Chinese

Portuguese and Tetum are official languages

After several days of negotiations, the East Timor government announces that Reinado’s rebels have surrendered and surrendered to the police.

After undergoing several surgeries in hospitals in Darwin, Australia, Ramos Horta returns to Dili. He is said to be 90 percent recovered from the injuries.

In connection with the attempted murder, the wanted rebel leader Alfredo Reinado (see Modern history) is shot dead. Gusmão describes what happened as a coup attempt by Reinado’s group. A hunt begins on the suspected rebels. The Australia-led international force in the country may be reinforced to a total of around a thousand soldiers and emergency permits are introduced.

President Ramos Horta and Prime Minister Gusmão are subjected to attempted murder. Ramos Horta is seriously injured when he is shot outside his home in Dili. Gusmão is also attacked on the same day but escapes unharmed. Ramos Horta is brought to Australia for care.