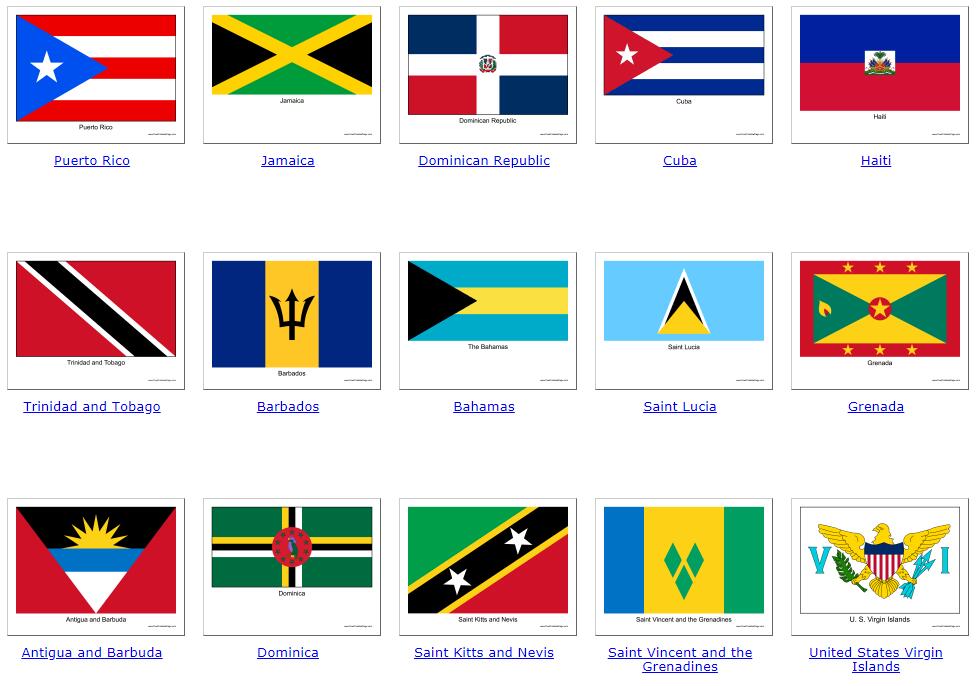 The flag was established in 1974. The design has no equivalent among the world’s flags. In the color symbolism yellow stands for the sun, green for vegetation, red for courage and vitality. The nutmeg marks the country’s main source of income, the stars corresponding to the island’s seven districts.

The flag began to be used in 1821, then as a common flag for the states of the Central American Federation. When the country became independent in 1839, it was maintained until 1865, when it was replaced by a flag similar to the United States. In 1912, the original flag was reintroduced. The blue fields symbolize the Caribbean and the Pacific. In the center of the white field is the state coat of arms.

The flag was officially established in 1844. Its central motif, the White Cross, symbolizes what the people have sacrificed for their independence and also stands for the unifying force of the Christian religion. The red fields express the blood and fire of the freedom struggle, the blue fields freedom.

The flag was adopted in 1978. Green symbolizes the forests. In the cross (representing the Christian Trinity), yellow is indigenous to the indigenous people, black to the African heritage, white to the clear waters of the rivers. The red circle marks socialism, the parrot is the national symbol, the stars correspond to the ten districts of the island.

The flag was officially established in 1902, but the origin can be traced back to 1850. The blue stripes on the white bottom symbolize the country’s three original provinces. The red triangle stands for freedom, equality and fraternity. The star marks national independence.

The flag was officially established in 1964, but its origins can be traced back to 1848. The blue and white fields symbolize the Caribbean and Pacific, respectively, the red center field linking ideologically to the February revolution in France in 1848.

The flag was set in 1981. The wreath around the weapon has 50 leaves and symbolizes the year 1950, when the national liberation began. In the state arms, held by a mastis and a creole, are seen, among other things. tools for logging, formerly the country’s most important industry.

The flag was adopted in 1966; blue symbolizes sky and sea, yellow sand of the beaches. The triad, the traditional attribute of the sea god Neptune, was already in the flag of the colonial era; that the shaft is gone here marks the break with the freedom of the past.

The flag was first hoisted in 1973. The colors symbolize the nature and people of the archipelago: the blue-yellow fields represent its sunlit beaches with the surrounding sea; the black wedge stands for the unity of the residents and their willingness to protect the country’s natural values.

According to COUNTRYAAH, Antigua and Barbuda is one of Central American countries, the flag of which was added in 1967. The sun marks the beginning of a new era with the country’s independence; red symbolizes the power of the people, black its African ancestry; blue is the color of hope, as is the surrounding sea, and white is the sand of the long beaches.

The flag began to be used in 1871 but was officially established only in 1968. In the color symbolism, blue stands for justice and faithfulness and white for the people’s integrity. The blue-white colors were adopted in 1821 as common to the countries of the Central American Union, dissolved in the 1840’s. The state arms are placed centrally in the flag.

The flag was officially adopted in 1962. Red symbolizes the vitality of the people and the life-giving power of the sun, the black population’s support for national unity, the white sea that unites the two islands. At the same time red-black-white represents the basic elements fire, earth and water.

Saint Vincent and the Grenadines

The flag was adopted in 1985. In the color symbol, blue stands for the sky, yellow for the sun and green for the archipelago’s lush vegetation. The green rhombs form the letter V (Vincent); previously there was in the middle field a stylized green leaf from the bread fruit tree.

The flag was introduced in 1967. The design is a stylistic representation of the island in the surrounding blue sea; The dark volcanic mountains rise from the yellow sandy beaches. At the same time, blue is interpreted as faithfulness, yellow as wealth and black-white as mixed culture in uniform.

The flag was introduced in 1983. The color scheme is the so-called Afro-Caribbean. Green stands for fertility, yellow for sunshine, red for liberation from slavery, and black for people’s African origins. The two five-edged white stars express hope and freedom.

The flag was established in 1903. Blue and red represent the country’s two political parties, white for the friendship between them. The blue star is said to symbolize loyalty and honesty, the red law and authority.

The flag was officially established the last time in 1971. The origin is the flag adopted in 1823 for the Central American Union. In the color symbolism, blue stands for justice and fidelity, white for purity and honesty. There is also a geographical interpretation: the country (white) between the Pacific and the Caribbean.

The flag was established in 1962. The color symbol stands yellow (in the form of a second cross found in the capital of Kingston’s coat of arms) for the country’s natural riches, green for agriculture and the future, and black for the heavy burdens of the past.

The flag was officially established in 1949 but originated in the flag adopted in the 1820’s for the Central American Union; the stars symbolize the five former Member States and express the hope of their reunification.

The current design of the flag was established in 1986. The blue field symbolizes the country’s black population, the red mulattoes. During the years 1964–86 the flag was vertically divided into black and red, before (from 1806) in blue and red. 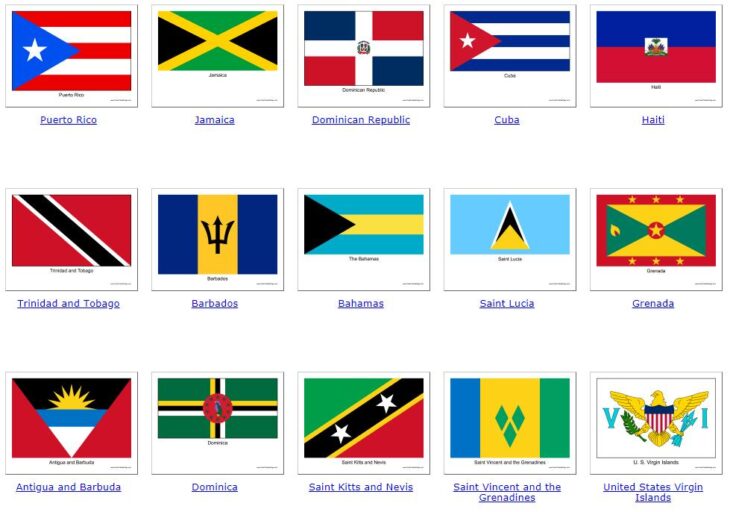