Lebanon is a very mountainous country. Along the 220 km long Mediterranean coast lies a narrow, fertile coastal plain, which is widest to the south. Parallel to the Mediterranean is the Lebanon Mountains (Arab. Jabal Lubnan ), where the uplands are snow-covered from December to May. The highest point is Qurnat as-Sawda ‘(3088 m asl) in the north, southeast of Tripoli. South of Beirut and Zahlah, the peaks rarely reach over 2000 meters above sea level. Lebanon’s eastern border runs along the anti-Lebanon mountain range (arab. Al-Jabal ash-Sharqi ) south to the 2814 m high Hermon mountain (arab. Jabal ash-shaykh), where the mountains turn west and form the border with Israel.

Both the Lebanon and the Anti-Lebanon Mountains consist largely of limestone, and were exposed to folds in the late Tertiary period. Between the two mountain areas lies the lush, 120 km long and up to 15 km wide Bekaa Valley (arab. Al-Biqa ‘ ), the country’s foremost agricultural area. The valley is approx. 900 m asl, and is part of a fault pit that has a great structural resemblance to the rupture line from the Red Sea to the Gulf of Aqaba and the Jordan Valley. The Bekaa Valley forms the watershed between the Litany River, which flows south through southern Lebanon, and Orontes (Arab. Nahr al-Asi ), which flows north through Syria. 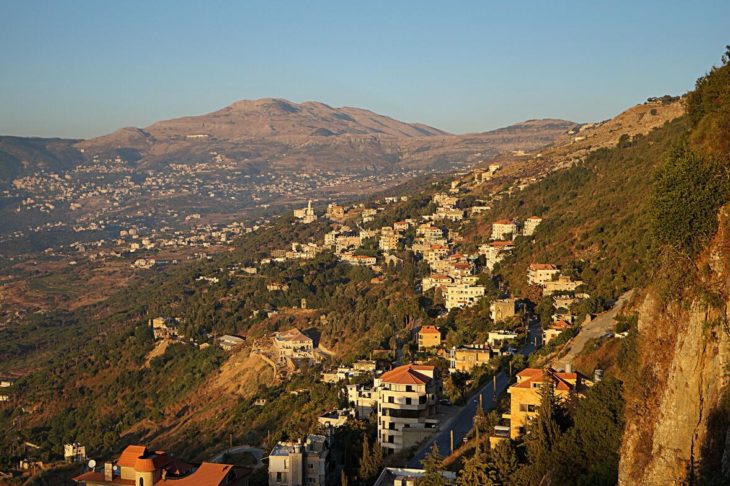 Lebanon has a typical Mediterranean climate with mild, rainy winters and hot, dry summers. The average temperature near the coast is 12–15 °C in January, and frost occurs only rarely. The temperatures in July and August are above 25 °C. The high humidity makes the heat pressure. For about. The average temperature in January is about 5 °C, while the temperature in July and August is slightly below 25 °C. Higher in the mountains, there are cold temperatures in the winter months, and snowfall is common. The annual rainfall is generally between 500 and 1000 mm, in west-facing mountain regions up to approx. 1500 mm. Sheltered areas to the far east receive significantly less rainfall.

Detailed climate information about Beirut on the website of the World Meteorological Organization.

Plant and Wildlife in Lebanon

The vegetation is lush in the west, more steep in the far north-east. In some remote places in the mountain valleys there are still remains of the great cedar forests. Some oak and pine.

The mammalian fauna includes 57 species, among others. red fox, wild cat, southern hare and some rodents. 358 bird species are registered, but only 116 nest. Of these can be mentioned donkey vultures, king eagle, mountain hen, palm tree, church owl and several clay species. Many birds stop in during the move. In addition, 44 reptile and 3 amphibian species occur.