In addition to the Georgians themselves, some seventy people live in the country, some being very small. Many of the ethnic groups are also found in Georgia’s neighboring countries.

According to a census conducted in 2014, 87 percent of the residents count as ethnic Georgians. Just over 6 percent describe themselves as Azeri and 4.5 percent as Armenians. The census was done late in the year, when mountain areas are difficult to access, but it could be carried out in four-fifths of the built-up areas. 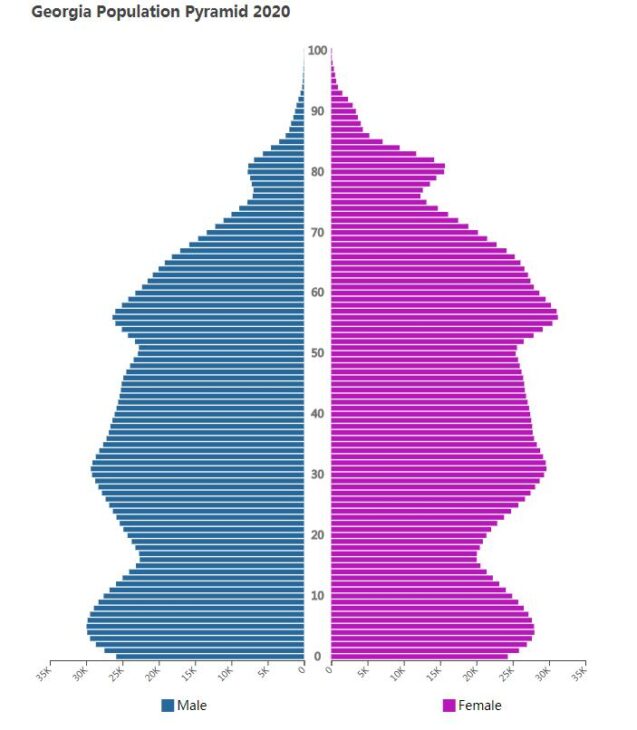 Azeri is mostly in the southeast near the border with Azerbaijan. In the south on the Armenian border, Armenians live.

Georgia is one of the least urbanized countries in Europe. Just over half of the residents live in cities. In the capital Tiblisi, 1.1 million people live – almost a quarter of the country’s population.

The population declined after independence in 1991 due to emigration, civil war and social and economic problems. Over one and a half million Georgians applied to Russia to work until 2006 when a conflict with Moscow closed that opportunity (see Foreign Policy and Defense). According to the 2014 census, the population decline has continued.

As a result of the conflicts between the central power and South Ossetia and Abkhazia (see Modern History and Current Politics) and the war against Russia in 2008, there are just over 250,000 internal refugees in Georgia, most Georgians who have moved or been displaced from the conflict areas.

The Meschetes, Turkish-speaking Muslims, were deported from Georgia in 1944 to Uzbekistan. After clashes with the uz cup in 1989, the Meschetes were forced to flee. Only in the summer of 2007, after years of negotiations, did Georgia agree to allow them to return. However, the process almost immediately stalled because of a domestic political crisis that autumn.

The country’s official language, Georgian, is the largest in the South Caucasian (Kartwelsh) language family. Georgian was already an official language of the Republic during the Soviet era and was of great importance to the Georgian national identity. A Georgian alphabet was developed in the 400s, but what is used today was created in the 1000s.

Most other Georgia communities also speak Caucasian languages. Many of them, including the Abkhaz, belong to the North Caucasian group. The Ossetians and Armenians speak Indo-European languages ​​and the Azeris speak a Turkish language.

Georgian is the official language 1

First step towards agreement with the EU

On November 20, Ivanishvili resigns as Prime Minister and succeeds Irakli Garibashvili, after being approved by Parliament and the President. The only other change in the government is that the 31-year-old Garibashvili is succeeded as Minister of the Interior by 28-year-old Alexander Tchikaidze.

The president pardons a party friend

As one of his last decisions before leaving, President Saakashvili pardons former minister Batjo Achalaia, just a week after he was jailed for excessive violence against revolting prisoners. Achalaia is being held in custody pending another trial, regarding abuse of power.

The Prime Minister appoints his successor

Prime Minister Ivanishvili designates 31-year-old Interior Minister Irakli Garibashvili as the one he wants to see as his successor when, according to previous promises, he is leaving shortly. Garibashvili must be nominated by Parliament and approved by the President, but it is considered pure formalities. The future head of government, and the country’s real leader when constitutional amendments came into force, were virtually unknown to the public before he was appointed Minister of the Interior, but have worked close to Ivanishvili for about ten years.

Prison for abuse of power for ex-minister

Former Minister of Defense and Interior Batjo Achalaia is sentenced to nearly four years in prison for abuse of power. He must have ordered excessive violence to strike a prison revolt in 2006, when seven prisoners were killed. Achalaia is the first close associate of outgoing President Saakashvili to be imprisoned, but more are awaiting trial. The verdict raises fears that the new government will resort to the “revenge policy” for which the EU has warned.

The presidential election results in a surprisingly big victory for Giorgi Margvelashvili from Georgian Dream, who gets just over 62 percent of the vote, against just under 22 percent for National Movement candidate Davit Bakradze. He accepts his defeat even before there are any official figures. Outgoing President Saakashvili calls on his supporters to respect the voting result, but describes it as “a serious departure” from Georgia’s path to development. OSCE observersdescribes the election as “positive and transparent” and says it shows that Georgian democracy has matured. That the voter interest was relatively low – just under 47 percent of those voting participated – is explained by the fact that the new president is given less power than the previous ones, as a number of constitutional changes take effect when he takes office (see Political system).

Saakashvili is threatened with prosecution after the change of power

Shortly before the presidential election, Prime Minister Ivanishvili threatens to bring President Saakashvili to trial when he resigns. Visiting foreign ministers from the EU, including Sweden’s Carl Bildt, urge Ivanishvili to respect the rule of law and avoid revenge actions and “politically based justice”.

Russia is building border fences along the breakaway republics

The Georgian government reports to the UN Human Rights Council that Russian soldiers have begun to build barbed wire fences along the outbreak republics of Abkhazia and South Ossetia against the rest of Georgia. According to the government, it is contrary to international law in this way to permanently occupy an occupation.

23 wants to be president

The Election Commission announces that 23 candidates have been registered for the presidential election to be held on October 27. An additional 31 have applied for registration but have been rejected for technical reasons, a spokesman said. The main candidates are Giorgi Margvelashvili for Georgian Dream and Davit Bakradze from the National Movement.

Ex-ministers are exempt from prosecution

Batjo Achalaia, closely associated with President Saakashvili, is cleared by a court of charges of abuse of power, illegal detention and torture during his time as defense minister. Prosecutions for similar charges during his time as Minister of the Interior and head of the country’s prison system remain. Former Defense Chief Giorgi Kalandidze and several others arrested along with Achalaia in November 2012 are also acquitted.

Former Prime Minister Vano Merabishvili and a former Health Minister are arrested for suspected corruption. Both are close to President Saakashvili. Among other things, they are accused of putting more than 22,000 party activists on the Ministry of Labor payroll. Merabishvili is to be detained for at least two months and denied bail.

An attempt to carry out a demonstration in Tbilisi for gay rights is stopped by counter-protesters led by Orthodox priests. Gay activists are led by police, but about 20 people are lightly injured. The day before, Prime Minister Ivanishvili has determined that sexual minorities have the same rights as everyone else in Georgia. Two priests are charged with forcibly denying people their freedom of assembly.

The Deputy Home Minister is arrested by police after accusations of posting a sneaky movie on the internet. The film is said to show how a famous journalist has a homosexual relationship with two other men. In a number of articles, the journalist has previously appointed high-ranking officials for illegally seizing private companies.

The Georgian Dream Government Coalition nominates Education Minister and Deputy Prime Minister Giorgi Margvelasjvili as his candidate in the October presidential election. Margvelashvili has an academic career behind him but is a newcomer to politics.

The war against Russia is re-examined

The government is launching a new investigation into the war against Russia in 2008. Prime Minister Ivanishvili admits that the purpose is to clarify the extent to which President Saakashvili can be blamed for the war. An EU-backed post-war investigation blamed Georgia for triggering the conflict but said Russia’s response was unreasonably harsh.

Parliament voted unanimously for a constitutional amendment that weakens the president’s power and, among other things, deprives the head of state of the right to dismiss the government and dissolve Parliament. President Saakashvili’s party The National Movement also votes for the government proposal after saying that it has never had such intentions and that the change of law is important for the democratic dialogue in the country. Formally, the law amendment must be voted through twice more before it can take effect.

A first sign that relations with Russia are improving is that Russian authorities have given nearly 40 Georgian winemakers the right to export their goods to Russia.

Schism within the new government

The first schism in the new government comes today. Defense Minister Irakli Alasania is deprived of his post as First Deputy Prime Minister, of all things to judge by disagreement with Prime Minister Ivanishvili about the candidate of the Government Alliance in the fall presidential election. Alasania is the leader of the Free Democrats party.

Parliament votes on President Saakashvili’s veto on the release of people the new majority calls political prisoners. About 190 people are immediately released from prisons and another 3,000 who have been jailed for various reasons are expected to be released within the next few weeks.