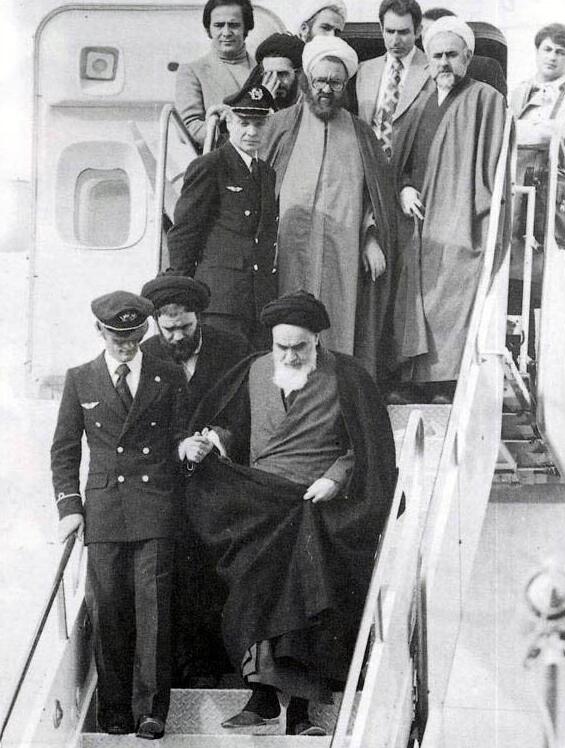 For the first time after the war, the young Shah had relatively little personal power. The constitution of 1906 was substantially fulfilled in 1949 and Iran in the form made a constitutional monarchy with a parliament consisting of two chambers, the lower house of Majlis and the Senate. The government was still responsible to the Shah.

In the years 1949–51, a mass movement for the nationalization of the oil industry in Iran, led by the leader of the Nationalist Front, Muhammad Musaddiq, emerged, and this was used by Musaddiq in a power struggle with the Shah for effective control over the government. In March 1951, Musaddiq ensured that a law was passed that nationalized the major British oil interests in Iran, and in late April the Shah was forced to appoint him prime minister. 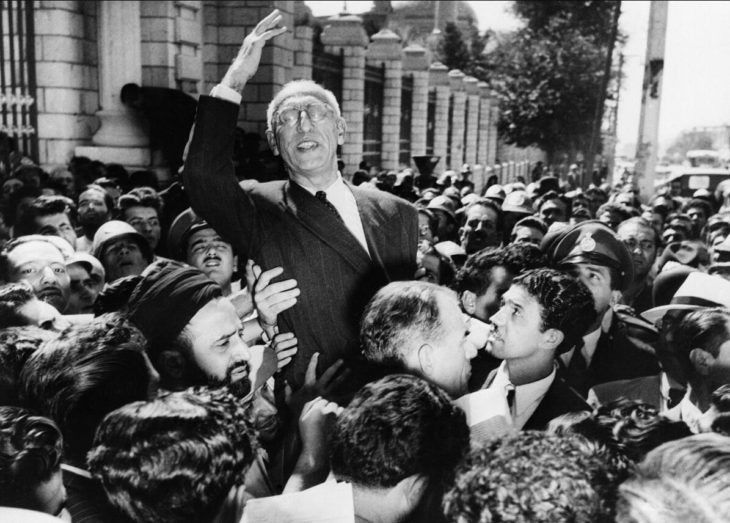 Muhammad Musaddiq became prime minister in 1951 and gained great popularity for his fight to nationalize the oil industry in Iran in the early 1950s. This made him a prominent enemy of the United States and Britain, which had many oil companies in the country. In 1953 he was deposed in a US-backed coup. Here he is praised by his supporters outside parliament in 1951.

In connection with the oil nationalization, Iran came into conflict with both the UK and other powerful interests in Western Europe and the US. The foreign technicians in the industry were expelled or left the refineries on a voluntary basis, and the authorities failed to keep up the operation. The country’s economic situation deteriorated rapidly; a serious contradiction developed between the Shah and his prime minister, and in August 1953 the crisis culminated. The Shah tried to oust Musaddiq, but was himself overthrown and forced to leave the country. A few days later, General Zahedi overthrew the Shah’s blessing and US support for the Musaddiq board. Zahedi was appointed prime minister, and the following year an agreement was signed with an international oil consortium. In 1955, Zahedi was succeeded as prime minister by Husain Ala, and the Shah personally began to intervene more strongly in the government. Both were energetically committed to improving relations with the Western powers, and Iran joined The Baghdad Pact. Relations with the Soviet Union became strained after this, but improved again from 1963, when the two countries entered into an agreement on economic and technical cooperation, and in the years that followed the Shah’s foreign policy developed into what can almost be termed as de facto alliance freedom within a Western friendly alliance of CENTO. In 1960, Iran had recognized Israel, leading to sharp reactions in the Arab world and among Iranian Muslims.

In 1961 the Shah disbanded the National Assemblyand opened up land reforms that the landlords of the congregation had opposed. The first land reform law was passed in 1962. Furthermore, the women were granted general voting rights. With American assistance, a strong expansion of the communication network was planned, construction of dam and irrigation plants was initiated, measures were taken against malaria, encouragement and support for industrial projects, etc. Sjahen also took the initiative to establish a health and literacy corps. the benefits of modern society to all the people. A far-reaching reshaping of the power structure in society was proposed in connection with the ambitious reform program “the white revolution”. A new political party, New Iran, was also set up to support reform policy. In 1964, however, there was a bloody clash in the reforms, which many of the conservative religious leaders and their followers had difficulty accepting. The influential Ayatollah Khomeini went into exile in 1963, and in 1965 Prime Minister Hasan Ali Mansur was assassinated by Shiite extremists. Amir Abbas Hoveida became new Prime Minister (1965–77). In 1965, the Shah was subjected to an assassination, and in the wake of this and the assassination of Prime Minister Mansur, a number of political trials were conducted. 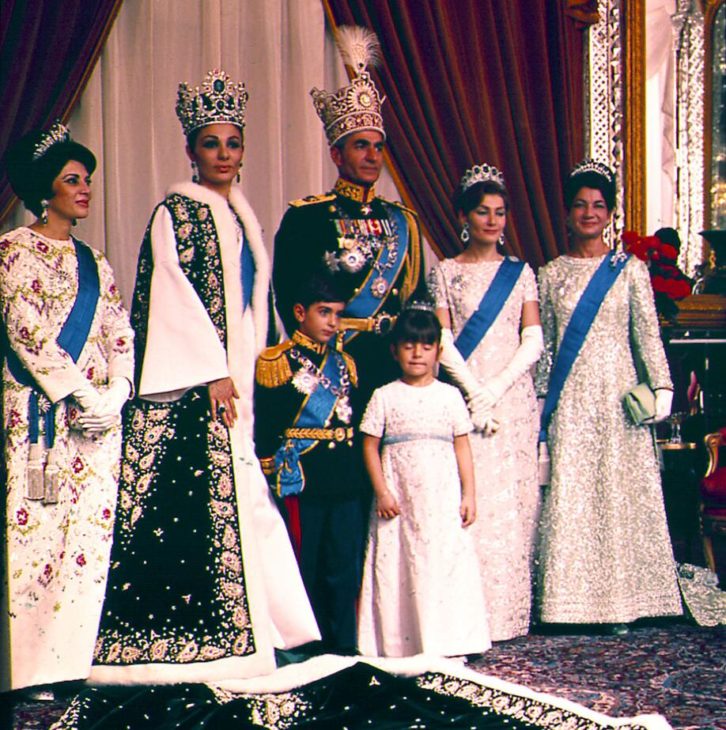 Despite Iran formally continuing as a member of CENTO and in military alliance with the United States, the country was gradually able to free itself from the political and economic dependence on the Americans. The economic development was generally favorable, not least because of the huge oil revenues, but the country also received funding for development from the US, Eastern and Western European countries as well as international credit institutions such as the World Bank. The US foreign aid program ended in 1967, and US contributions of more than $ 600 million over 17 years were made. Military aid was maintained, while the cost of economic development was increasingly covered by oil money. In 1973 came a law on the complete nationalization of the oil industry. Iran worked as a leading member of OPEC energetic for a drastic increase in oil prices from the producer countries, but did not participate in the oil boycott of the western countries in the winter of 1973-74. Relations with Arab countries improved, while attitudes toward Israel became more critical. Relations between Iran and neighboring Iraq were strained for many years, but diplomatic relations were restored in 1973 and a border agreement was signed in March 1975, which helped, among other things, to defeat the Kurdish uprising in Iraq from Baghdad. The Shah used large sums of the huge oil revenues to build up the strongest military power in the region, but considerable resources were also spent on industry, agriculture, communications, health and education.

Opposition to the Shah’s “enlightened monarchy” grew in strength after the monarchy’s 2500th anniversary in 1971, but was long held down by strict means by the secret police SAVAK, which was expanded with the help of the CIA and Israel’s Mossad. Elections to the lower house ( Majlis ) were held in June 1975 after a new one-party system was introduced.

From the summer of 1978, extensive demonstrations began, especially among the students and business community in the cities and supported by the religious Orthodox opposition. The opposition increased in strength and soon came to rally around Ayatollah Khomeini as a leadership figure. Demonstrations and general strikes became increasingly serious. Oil production and exports fell to a low target, and the government failed to restore order. Therefore, in November 1978, the Shah appointed a military government, in early January 1979 replaced by a civilian government under Shapur Bakhtiar, a moderate nationalist who had served in Musaddiq’s government in 1953. 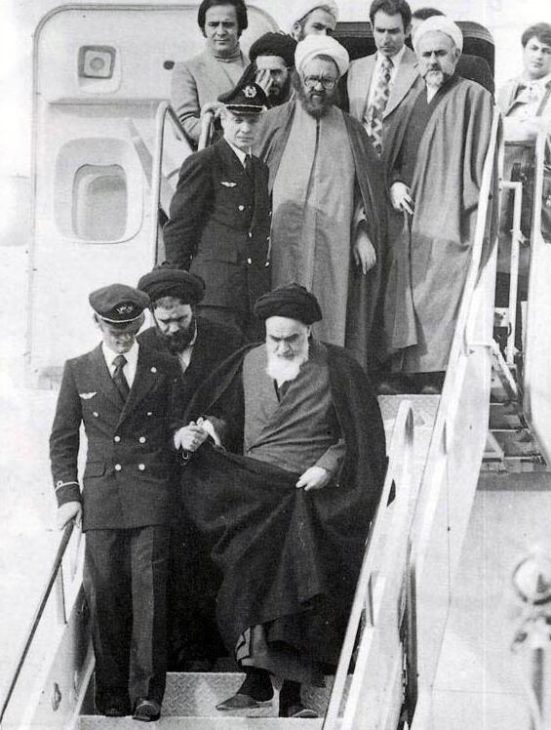 An intense power struggle developed between Bakhtiar as leader of the Shah’s “legal” government and Khomeini as representative of the revolutionary “Islamic legality”, backed by incessant mass demonstrations and strikes in Iran’s cities. To facilitate Bakhtiar’s task, the Shah chose to leave Iran at the end of January. In February, Bakhtiar had to find out that Khomeini was allowed to return from Paris. The religious leader appointed his own prime minister, Mehdi Bazargan, a former government colleague of Bakhtiar. When the demonstrations became so fierce that the army’s discipline and loyalty to the Shah completely collapsed, Bakhtiar had to retire. The Shah was declared deposed, and in a referendum on the establishment of an “Islamic Republic” (April 1979), 99.3% voted in favor of such governance.

A number of officers and officials from the Shah’s time were arrested and many were executed. During 1979, all major industry in Iran was nationalized, and the country broke all major contracts with foreign companies. Iran also refused to pay the foreign debt that the country had incurred during the Shah.

There soon became a conflict between the Bazargan government and Khomeini’s Islamic Revolutionary Council over who had the supreme authority in the country. In October 1979, Khomeini’s power was expanded to include, among other things, the commander-in-chief of the armed forces and the authority to ban a president-elect. In early 1980, Abolhassan Bani-Sadr was both elected president and appointed leader of the Revolutionary Council. Later that year, Muhammad Ali Rajai took over as prime minister.