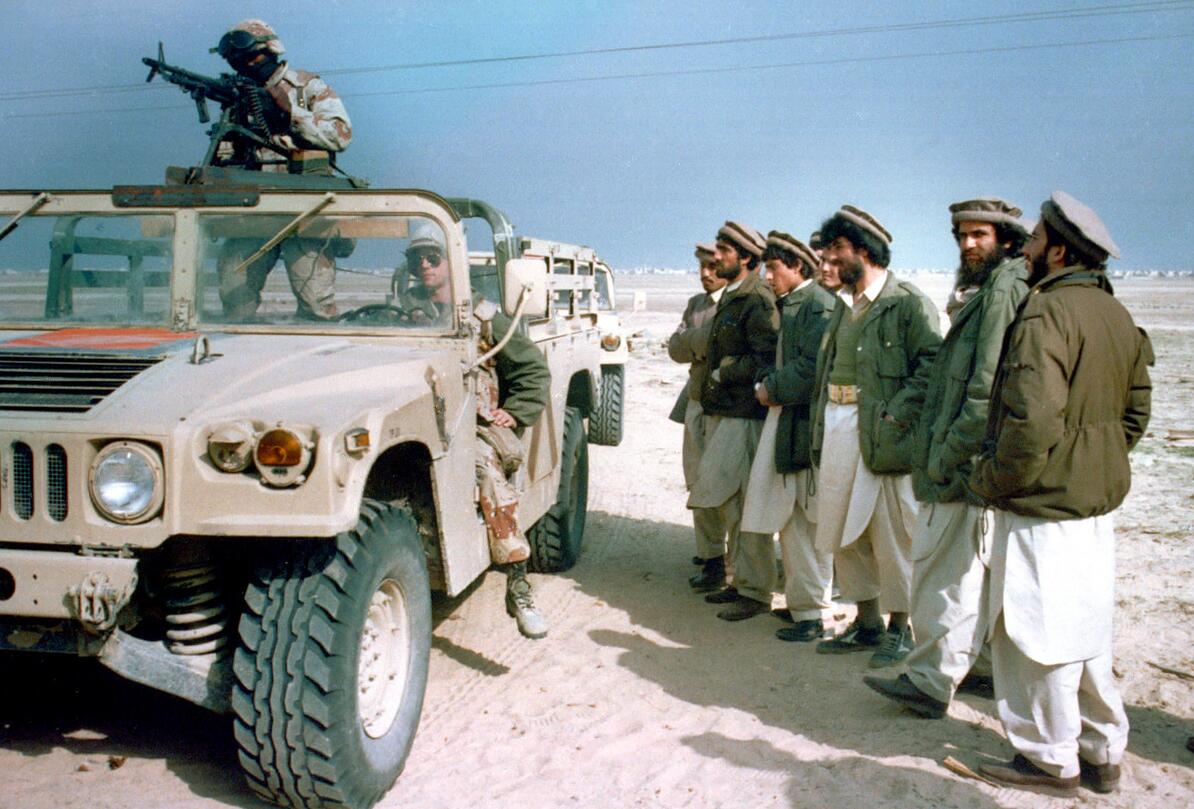 The Iraqi state formation (from 1921)

From 1918 most of Iraq, from Basra to Mosul, was governed by British rule, and the British East Commander ruled the country through a civilian commissioner. When the victory powers at the San Remo Conference in 1920 divided the Middle East between them, Iraq was made a British mandate area. With this, Basra (in the southern Shia-dominated areas), Baghdad (in the central Sunni-controlled areas) and Mosul (in the northern Kurdish areas) were for the first time merged into one nation-state. The British administration introduced a modern administration, which was viewed by the Iraqis as a foreign element. 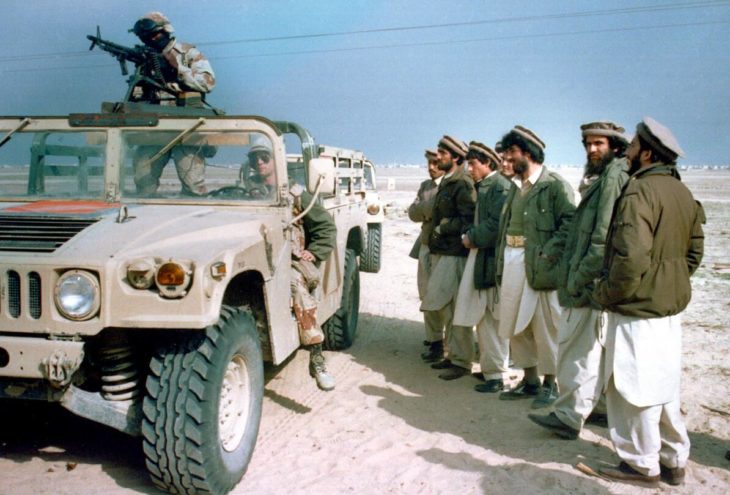 During the Gulf War in 1990-1991, the United States took part in fighting to free Kuwait from Iraq’s occupation. The picture shows US soldiers and Afghan mujahedins in Saudi Arabia on February 11, 1991. The mujahedins were employed by the Saudi Arabian government to fight Iraq.

During the war, the Arabs had come to understand that they would be granted independence after the war. When this hope was not fulfilled, rebellion broke out in the country, especially among the Shia in the south, which was not beaten down until 1921. In October 1920, the British military regime was wounded, and an Arab state council was formed with British advisers, who in reality had the power. In March 1921, the British retrieved Feisal ibn-Hussein from Saudi Arabia and inaugurated him as king of Iraq. The British developed a constitution and a two-chamber system for the Iraqi monarchy. A British-Iraq agreement of 1922 guaranteed foreigners’ legal rights in Iraq and Britain’s special interest in the country. A new agreement was signed in 1930, which granted the UK the right to use the airbases at Shuaiba and Habbaniya for 25 years. The League of Nations recommended in 1925 that the Mosul district, which Turkey claimed, be incorporated into Iraq, and an agreement was reached between Iraq, Turkey and the United Kingdom in 1926. The 1920 peace treaty also stipulated an independent Kurdish state in the Kurdish the areas of today’s Iraq and Turkey. This was not carried out, and the new Turkish regime claimed Mosul and invaded the area. The British expelled the Turkish troops,The League of Nations.

In October 1932, the British mandate over Iraq ended, and the country became a member of the League of Nations as an independent state. The British had not only secured political and military influence in the country, but also the right to search for and extract oil through the establishment of the Iraqi Petroleum Company (IPC), controlled by foreign oil interests. Towards the end of the 1930s, relations with Britain deteriorated, mainly due to British politics in Palestine and anti-Zionist attitudes in Iraq. At the outbreak of World War II, Iraq severed diplomatic relations with Germany, and Prime Minister Nuri al-Said wanted to declare war on Germany but met with resistance in the army. In the officer corps there were strong sympathies for Germany and antipathies against Britain, and with a start in those circles a military regime came to power through a coup in 1941, led by Rashid Ali al-Gaylani. This led to British intervention and occupation of Baghdad and Basra, after which Iraq declared Germany war in 1943.

Both before and after World War II, the political situation in Iraq was characterized by strong internal contradictions and political instability, and Iraq was ruled by 24 different governments in 1945–58. The first of a long series of military coups in Iraq was carried out in 1936, and in the north of the country the Kurdish minority revolted and demanded internal autonomy. King Feisal died in 1933 and was succeeded by his son Ghazi; after his death in 1939, Crown Prince Abdulilah took over as regent, until the heir Feisal 2 became old enough to rule 1953. The monarchy had little ground in Iraq and did not help to create a national feel within the new state formation. By contrast, the army was an integrative force, although it also contributed to divide, through several coups.

After the end of the war, the state of emergency was abolished, and it became possible to form political parties. These ranged from the right-wing independence party to the Social Democratic National Democratic Party. The Communists were not given the opportunity to form a party, but were active underground and organized most of the strikes and mass demonstrations in Iraq in the 1940s and 1950s. Iraq was one of the founders of the Arab League in 1945 and worked to establish the state of Israel. A draft renewal of the 1930 agreement between the United Kingdom and Iraq was signed in 1948, but later canceled following fierce demonstrations against the agreement in Iraq.

One issue that brought Iraq together was opposition to Israel. When Israel was established in 1948, Iraqi forces participated in the first Arab war against the new state. After 1948, extensive emigrations of Iraqi Jews took place, especially 1951–52. Despite sustained nationalist movements in the Iraqi population, and increased support for Pan-Arab nationalism after Nasser came to power in Egypt in 1952, the Iraqi monarchy was orientated in the western half of the 1950s. In 1955, the so-called Baghdad Pact was signed; originally as a defense and cooperation agreement between Iraq and Turkey, but also the United Kingdom, Pakistan and Iran. The deal was by the opposition – Arab nationalists, communists, traditionalists and officers in the army – seen as concessions to former colonial powers and as part of the monarchy’s anti-Soviet politics. The nationalists viewed the Soviet Union as a friend of the Arab world. The relationship with the West deteriorated as a result – The Suez conflict in 1956, when Iraq sent troops to Jordan, as a precaution against any Israeli expansion eastward.