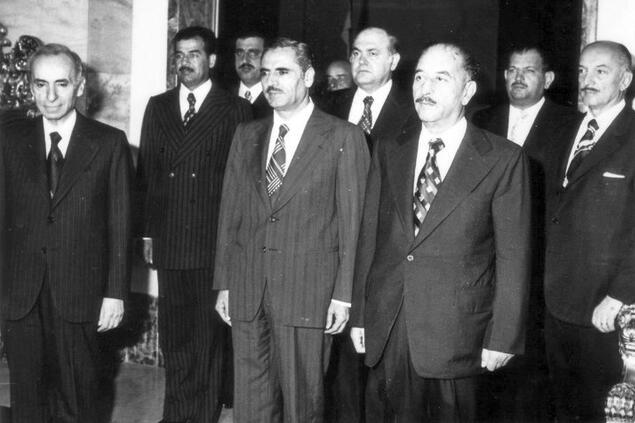 A historic turning point in Iraq’s modern history occurred in 1958, when the kingdom was abolished in a coup d’etat and the country gained military leadership. The coup took place as a result of King Feisal 2 entering into an agreement with King Hussein of Jordan that the two countries would be merged into a union, the Arab Federation. This was a response from the two moderate monarchies to the establishment of the United Arab Republic that year – the union between the two radical states of Egypt and Syria.

The merger of Iraq and Jordan was brief. Through the military coup on July 14, 1958, the Iraqi kingdom was abolished. King Feisal 2 was killed, along with the Crown Prince and Prime Minister Nuri al-Said. One reason for opposition to the union agreement with Jordan was that it had been entered into over the heads of both the people and the army. Another main reason for the coup was restrictions on the political freedom that had been introduced since 1954.

The military coup was led by a group called “The Free Officers”. They established a republic with General Abd al-Karim Kassem as prime minister and head of state. The officers had several political parties, including the Baath party and the Communist party. The takeover was met with enthusiasm, but the military had no common political platform, and there were strong internal disputes between various factions about the political direction. The pan-Arabists pushed for Iraq to join the Egypt-Syria union. That same year, Iraq withdrew from the Baghdad pact, which also led to the last British Air Force group being taken out of Iraq.

The Baath Party played no central role when the Republic was introduced to Iraq in 1958, but its influence increased, among other things, by a number of prominent officers joining it. The party tried to overthrow Kassem in 1959, but failed. One of 17 defendants after the coup attempt that was sentenced to death was Saddam Hussein. An alliance between the Baath party and nationalist officers carried out a new coup in February 1963, when General Kassem was deposed and executed. Colonel Abdul Salam Aref became new president and carried out arrests and executions of political opponents. The Communist Party, which stood strong, was persecuted. The Baath Party stood for Arab nationalism, and wanted Iraq to join the United Arab Republic. One step in this effort was the establishment of the Iraqi Arab Socialist Union in 1964, a party to replace everyone else. In 1966, President Aref was killed in a helicopter crash and was followed by his brother, Major General Abdul Rahman Aref. The coup attempt against him in 1965 and 1966 fails.

Iraq did not participate in the Six Day War in 1967, but as a result, Iraq severed diplomatic relations with the United Kingdom and the United States, and banned the export of crude oil to the two countries.

In July 1968, General Ahmad Hassan al-Bakr and a group of Baath leaders conducted a new military coup. President Aref went into exile, and al-Bakr took over his position, with Saddam Hussein as second in command. The new Baath regime carried out far-reaching social and economic reforms, led a radical foreign policy with strong anti-Zionist and anti-imperialist rhetoric, and supported radical Palestinian groups and the left-wing in the Arab world. In 1972, Iraq signed a 15-year cooperation agreement with the Soviet Union, which included, among other things, weapons supplies and advice from several thousand Soviet advisers. In the same year, Iraq nationalized the oil company IPC.

Iraq sent troops to Syria during the October war in 1973, but they did not participate in the war. In 1974, there was a strong clash between Kurdish separatists and Iraqi forces. A principle agreement on internal self-government was signed in 1970, but the negotiations broke down as a result of disagreement over control over Kirkuk. Iran feared radical Iraqi rhetoric and supported the Kurdish separatists with military equipment. As a result, the Iraqi military failed to regain control over the northern areas. Only after negotiations with Iran, led by Jordan’s King Hussein in 1975, did Iran withdraw military support to the Kurds, who were subsequently defeated.

In 1979, al-Bakr was succeeded by Saddam Hussein as president. For several years he had systematically strengthened his position, including by removing political opponents. The purge of political opponents continued after the takeover of power. An alleged failed coup attempt 12 days after the presidency led to the execution of 22 key members of the Iraqi leadership. Parallel to increased concentration of power and increased oil revenues, the president initiated a cult of personality around himself.

Elections to a new national assembly were held in 1980. A Kurdish assembly was also elected. In the administration and in the defense, the position of the Sunnis was constantly reinforced at the expense of the Shiites, and within the officer corps, people belonging to the same clan as Saddam, the Tikrites, gained a dominant position. The military was a decisive power factor and was dominated by Sunni officers. While the Sunni power base prior to the 1958 revolution was linked to the monarchy, it was then in the military. The political power base remained the Baath Party, which became an instrument for retaining Sunni power, to the displacement of the Shiite majority. Like the Kurds in the north, the Shiites in the south organized militant opposition to the Sunni-dominated regime. To the extent that opposition to the Baath regime was threatened, the Kurdish uprising in the north was still a major threat.