Persians make up more than half of the residents of Iran. The second most are the Azeri while up to one tenth are Kurdish. The remainder belongs to a number of smaller groups. The population has almost quadrupled in half a century, but the previous high birth rates have dropped dramatically since the 1980s. Most Iranians live in the north and in the west.

Historically, the Persians have been leading the way in society and they still dominate the state administration. Azeris (Azerbaijanis), who are a Turk people, make up perhaps one fifth of the residents – the data vary – and live mainly in the northwest. The Kurds are found along the border with Turkey and northern Iraq, mainly in the province of Kordestan. A few percent of the population are Arabs. They dominate in the oil-rich province of Khuzestan in the southwest. Among other smaller people groups are Turkmen, balucher, lurk and qashqai. 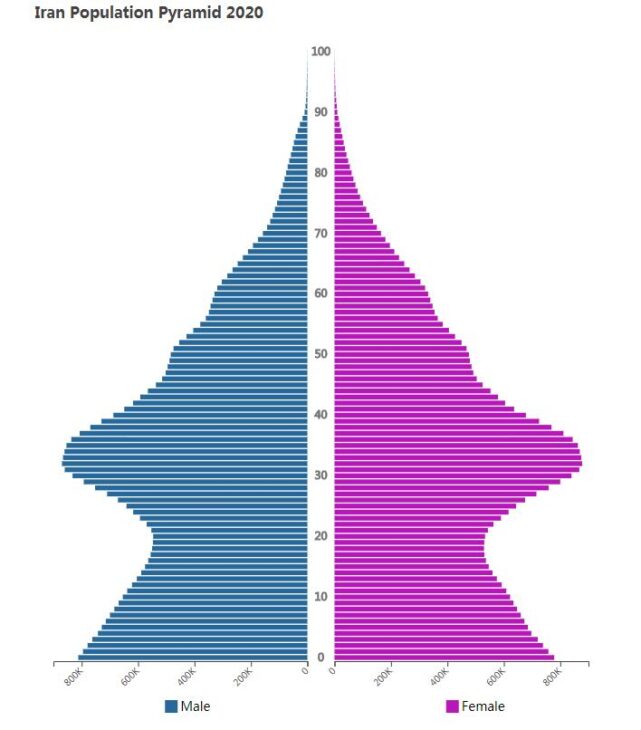 Iran recognizes that the minorities exist, but in order to create a Persian unity culture, the regime exercises strict control over the various ethnic groups. Their right to use their own languages ​​in writing is severely limited and all teaching must be in Persian. The Kurds, who after the Islamic Revolution of 1979 (see Modern history) waged an armed struggle for independence, have long been treated with mistrust and literature in Kurdish has been censored severely. After 1979, other ethnic groups also tried to achieve increased self-government, but their struggle was defeated by the regime.

A few hundred thousand young, often well-educated Iranians are estimated to leave the country each year in search of a better life in Europe or North America.

The Islamic revolution was followed by a baby boom and then by a child restraint program that has received international acclaim. But in 2020, the government warned that low birth rates could soon lead to population decline. Government policy has therefore been revised once again to encourage childbirth.

Because of conflicts in neighboring countries, Iran has been one of the world’s largest refugee recipients. Most of the refugees have been Afghans and – under Saddam Hussein’s 1979–2003 regime – Iraqi Shia and Kurds. UNHCR UNHCR helped over 900,000 refugees return to Afghanistan between 2002 and 2014. Despite that, in 2018, there were approximately one million registered refugees in Iran, and a total of perhaps three million Afghans. Many are unregistered migrants who take jobs that few Iranians want and live in difficult conditions. A law change in 2019 improves the conditions for some of the children: Iranian women who are married to Afghans can now apply for their children to become Iranian citizens.

Persian is the official language 1

The President criticizes the corruption

President Rohani warns that corruption in Iran poses a threat to the Islamic revolution. He points out the state monopoly, not infrequently driven by the military, as a source of corruption and calls for “struggle” for more competition in business. In 2014, the Transparency International organization placed Iran in 136 of 175 countries audited for the occurrence of corruption.

Reformist Party may be registered

For the first time in several years, a party that is described as reform-oriented is allowed to register. The party of Iranians is led by Sadegh Kharazi, former ambassador to France and adviser to former President Khatami. The new party also includes members of the Islamic Iran Participation Front. Iranians’ vote is also said to gather supporters of Mir Hossein Moussavi, who has been in house arrest since the Green Movement was crushed after the 2009 presidential election.

President Rohani gets the go-ahead from Parliament for his election of Minister of Research and Education. The new minister Mohammad Farhadi comes from the post of head of the Iranian Red Crescent. Two previously nominated have been rejected as overly reformist.

New deadline for the nuclear negotiations

In what is supposed to be the crucial negotiations on the Iranian nuclear program, the six major powers and Iran fail to agree, despite what several spokesmen describe as good progress. The deadline is extended by seven months to June 30, 2015. Nothing is said about what the negotiations have fallen on.

Former Chief Prosecutor of Tehran Said Mortazavi is reported to have been suspended from all work within the judiciary for the rest of his life on order by the Supreme Court (see February 2013).

Iran signs contract with Russian company Rosatom on two new Russian-built nuclear reactors at the Bushehr plant. At the same time, Iran’s negotiations with the major powers over the country’s nuclear program are entering the final stage.

Human rights lawyer Nasrin Sotoudeh is banned from practicing his profession for three years. She has been awarded the Sakharov Prize for her work in defending democracy activists such as Nobel Laureate Shirin Ebadi (see also September 2013).

President Rohani suffers from a hardship when Parliament dismisses the Minister for Science, Research and Technology, Reza Faraji Dana. He is accused of trying to recruit staff who supported the protests against the re-election of Ahmadinejad as president in 2009. Dana is also criticized for allowing suspended students to return to universities.

Journalist and human rights activist Serajeddin Mirdamadi is sentenced to six years in prison for “spreading propaganda and threatening the security of the nation”. Mirdamadi worked at the Iranian Interior Ministry under the reform-minded President Mohammad Khatami but then lived in France, from where he returned after the election of Hassan Rohani as president in 2013.

The IAEA says that Iran has so far fulfilled its commitments under the preliminary agreement. Half of the country’s 20 percent enriched uranium has been downgraded to 5 percent and the rest has been converted to uranium oxide. No more enrichment above the 5 percent level has taken place at any of the country’s facilities.

The days before the deadline for reaching a permanent agreement on the Iranian nuclear program expires, the parties decide to extend the negotiations to November 24.

A revolutionary court sentenced eight young people to prison for between 11 and 21 years for regime-critical posts on Facebook.

The US government approves of Iran’s access to $ 450 million held in US accounts. The decision is made after the UN agency IAEA confirmed that Iran has so far fulfilled its commitments under the provisional agreement on the country’s nuclear program.

The death penalty for American is transformed

The US former Marine Corps soldier of Iranian charge sentenced to death for espionage on behalf of the CIA (see January 2012) gets his sentence converted to ten years in prison.

The US refuses to grant entry visas to Iran’s newly appointed UN ambassador, Hamid Aboutalebi. The United States claims that he was involved in the occupation of the country’s embassy in Tehran in 1979-1981. It is known, for the first time, that the United States refuses to allow a UN ambassador to take up his post in New York.

Boeing is allowed to export to Iran

US aircraft manufacturer Boeing gets permission from US Treasury to sell spare parts to Iran. This is the first time since 1979 such a license has been granted.

More and more executions are worrying

The UN Human Rights Commissioner expresses “deep concern” over the growing number of executions in Iran. So far during the year at least 80 prisoners have been executed.

Leading opposition politician Mehdi Karroubi is moved from detention to house arrest in the home under continued strict surveillance (see also February 2011). The prosecutor says both Karroubi and Mir Hossein Moussavi remain in house arrest until they “make a prayer” for their “upbeat” statements.

Superpower agreements start to be applied

The provisional agreement with the major powers (see November 2013) comes into force on January 20. In the presence of inspectors from the IAEA, work in the Natanz and Fordo plants is interrupted in enriching uranium to over five percent purity. At the same time, parts of its stock of medium enriched uranium are beginning to be destroyed. Thus, negotiations on a long-term agreement can be initiated.