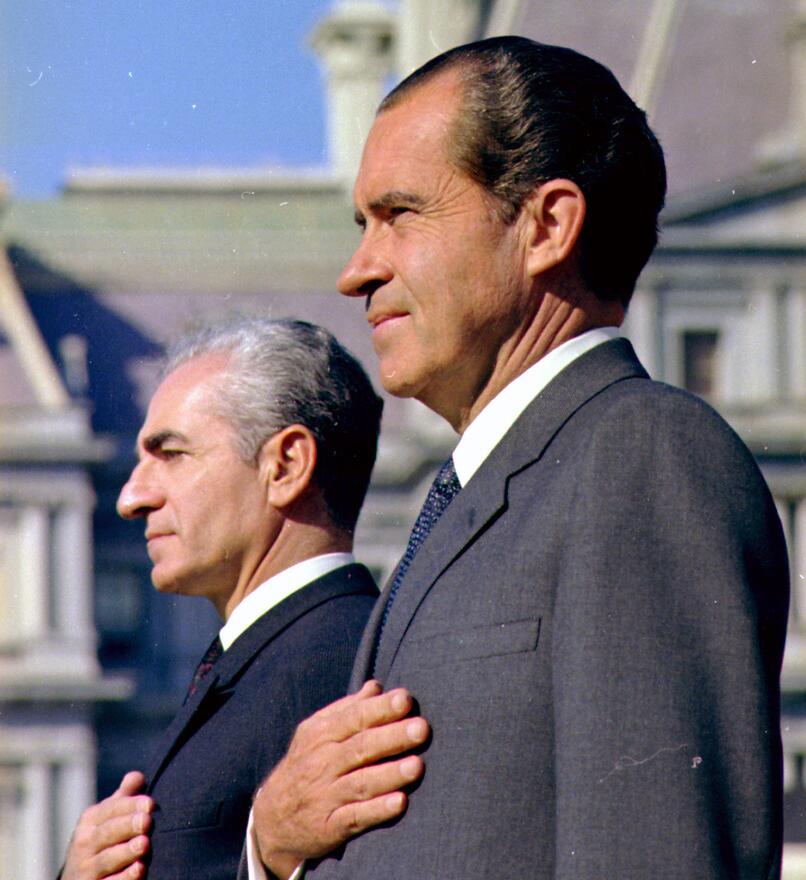 In the 1990s, the CIA accused Iran of being responsible for more than 1,000 deaths in several hundred terrorist attacks since 1979, including the 1983 suicide bombing in Beirut in which 299 US and French soldiers were killed. In June 1994, the United Kingdom expelled Iranian embassy personnel for their alleged support for the IRA. In 1992, three Iranian opposites were murdered in Berlin, and a German court ruled in 1997 that Iranian authorities were responsible for the killings. The case led to most EU countries temporarily calling their ambassadors from Tehran. Iran maintained a high profile in the Bosnia conflict, supported the Muslims with weapons and declared the UN arms embargo invalid. 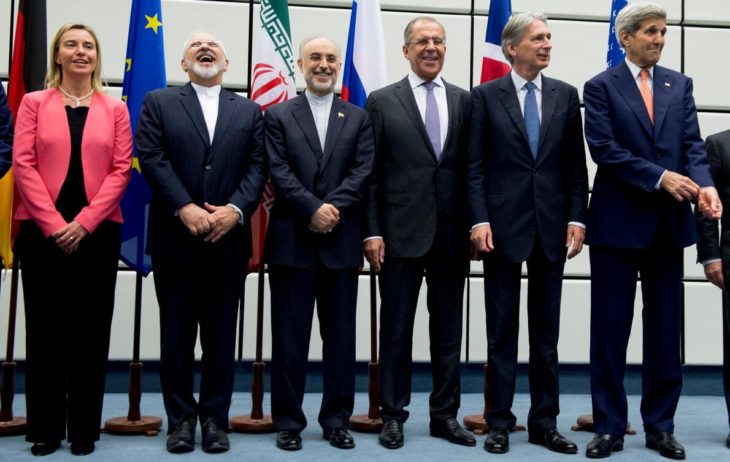 In 1995, Russia and China signed agreements to build a nuclear power plant and at least two smaller reactors in Iran. Suspicion of an Iranian nuclear weapons program, as well as allegations of support for international terrorist organizations, led in April 1995 to the United States banning all trade with Iran for US companies. Inspectors from the International Atomic Energy Agency IAEA visited Iran in 1992 and 2004 without finding evidence that Iran’s nuclear program included military use. The battle over Iran’s nuclear program represents an explosive and dangerous battle issue that could have serious consequences, from financial sanctions to possible attacks on the country’s nuclear facilities. Iran insists that the purpose of the nuclear program is peaceful. The US wants to bring Iran in for the UN Security Council, but until 2005 it has chosen to support the EU’s efforts, the so-called EU-3 negotiations (UK, France and Germany). In 2005, Iran announced that nothing would stop Iran from developing nuclear energy for peaceful purposes, and the newly elected president has stated that Iran will continue to work on all aspects of its nuclear program.

Iran has a correct relationship with most countries in the world, but with two important exceptions, the United States and Israel, which in Iranian rhetoric tend to be “big-satan” and “little-satan.” It is official Iranian policy to destroy the Jewish state, and Iran provides active support to far-reaching groups such as the Lebanese Shia Muslim party Hezbollah and Palestinian Islamic Jihad and Hamas. 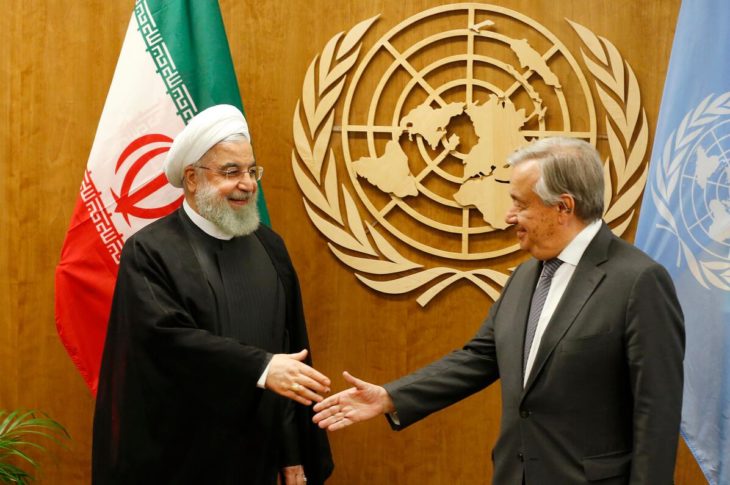 Hassan Rouhani has been Iran’s president since 2013. Rouhani is linguistic and known for his good diplomatic abilities. Here he meets UN Secretary General António Guterres in New York during the UN General Assembly in September 2019.

Foreign policy is in fact governed by the non-elected government and is positioned in relation to the Shia Muslim majority in Iraq, a most positive relationship with the EU and other European partners, limiting US regional influence and promoting foreign investment. In 2002, President Bush declared Iran as part of the “axis of evil” because of the country’s nuclear program, the stance of the Middle East conflict and support for violent Islamic groups such as Ansar-al-Islam and al-Qaeda. Iran has then faced increasing external pressure demanding that it abandon its nuclear weapons program, live up to its human rights commitments, stop support for international terrorism and not interfere with Iraq’s domestic affairs or attempt to sabotage attempts for a Middle East peace settlement.

The United States, Arab leaders and various Iraqi groups have repeatedly accused Iran of meddling in Iraqi conditions and of supporting terrorist groups operating in parts of Iraq. It is undoubted that Iran has vital interests related to what is happening in neighboring countries. Iran fought a bloody eight-year war with Iraq in 1980-88 and does not want Iraq to become a political, military or ideological threat again. Iran is likely to maintain a comprehensive intelligence system in southern Iraq, Baghdad and in the Kurdish areas of northern Iraq, combined with religious propaganda and welfare support funded by Iranian Islamic foundations. Iran has good opportunities for infiltration and presence through Iranian pilgrims traveling to the holy cities of Najaf and Kerbala and returned Iraqi refugees. Iran has for many years housed an Iraqi refugee population of hundreds of thousands. In the last two years, about 110,000 Iraqi refugees have traveled home, preferably to southern Iraq. Iran has also for many years housed and supported important Iraqi Shia Muslim parties. It is considered in Iran’s interest to secure a friendly Shia Muslim-dominated government that will reduce US influence, and to preserve Iraq’s territorial integrity, including to prevent the establishment of a Kurdish state in Northern Iraq that could in turn have consequences for Iran. large Kurdish population. In addition, Iran may feel its security threatened by US-friendly and US-backed regimes in both major Iraq and Afghanistan neighboring countries. 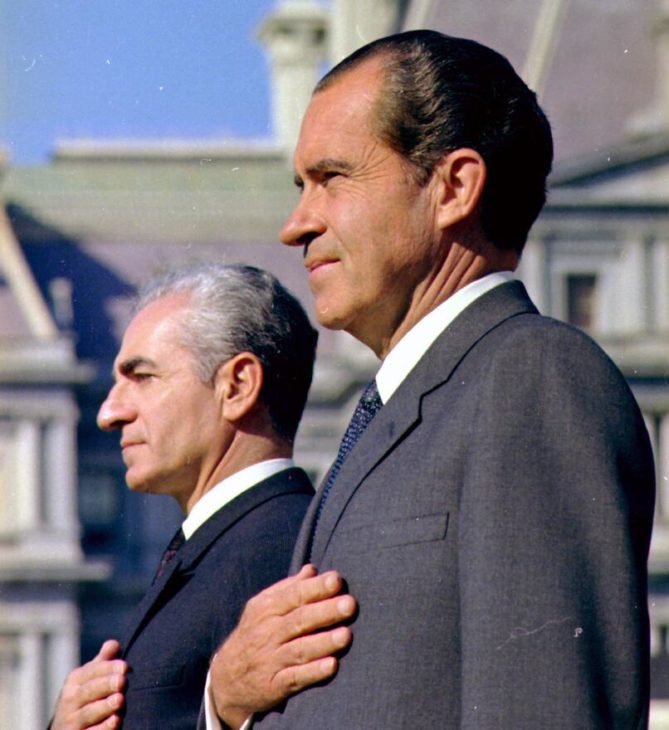 After the revolution, Iran has been Syria’s closest ally, and through Syria, Iran has sought to influence developments in Lebanon as well as in the Palestinian territories, through support for several groups, especially Hezbollah in Lebanon. Iran has contributed both to the training and equipping of Hezbollah, including a reconstruction of the group’s military capacity since the war with Israel in 2006. During the civil war in Syria, Iran has been one of the few countries that have supported the regime of Bashar al-Assad, in part directly, partly indirectly through Hezbollah. Iran’s role in the conflict – and the development of the region – was further highlighted as a result of mounting pressure on the Iranian nuclear weapons program, particularly from the United States and Israel.