Iraq’s population is growing rapidly and four out of ten Iraqis are under 15 years of age. The residents are unevenly distributed over the country, which largely consists of desert. A majority of the population lives in fertile plains along the Euphrates and Tigris rivers. More than three-quarters of Iraqis are Arabs. The largest ethnic minority are the Kurds.

Almost all Arabs are Shia or Sunni Muslims (a small group are Christians). Arab Shi’ites make up about 60 percent of the population, while the proportion of Arab Sunni Muslims is estimated to be about 20 percent. Most Kurds are Sunni Muslims, but there are minorities of Shiite Kurds (Feyli Kurds) and Yazidis (see below).

The Shi’a Muslims live mainly in the south and in smaller areas north of Baghdad. Three-quarters of the capital’s residents are now estimated to be Shia Muslims, which is an increase since the US invasion in 2003. Many Sunni Muslims were expelled from Baghdad by Shiite militias during the fighting of the 1990s. 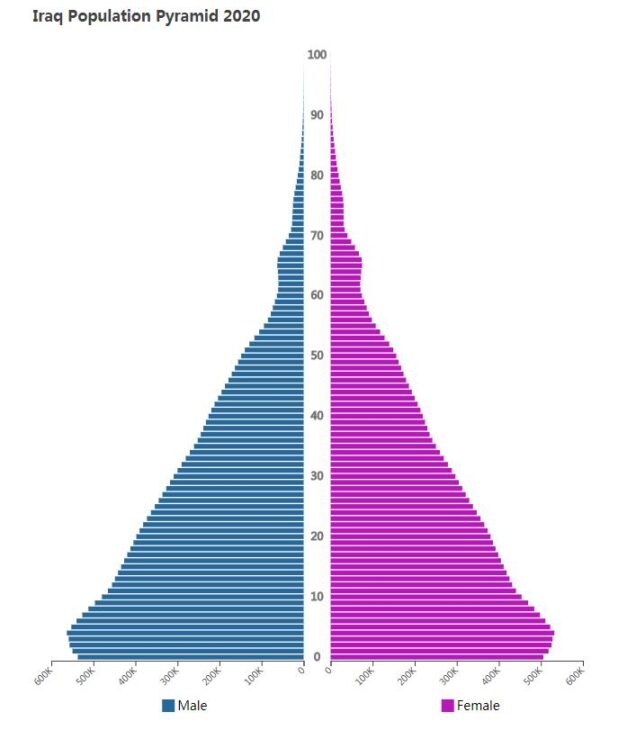 Most Sunni Arabs live in the central and western parts of Iraq as well as in major cities such as Baghdad and Mosul. In Basra in the south and the Kurdish-populated mountains in the northeast, the number of Sunni Arabs is small.

Kurds, which account for almost a fifth of the population, live primarily in three provinces in the northeastern mountain regions, which constitute the autonomous region of Kurdistan. Many Kurds also live in neighboring provinces to the south and west, where large population movements have taken place (see Modern history and Kurdistan).

In the north and north-east, where Arab Iraq begins to move into Kurdish-populated areas, several religious and ethnic minorities live. The largest are the Turkmen, a Turkish people where the majority are Sunni Muslims. Data on their numbers vary widely, but may be around a million. The ethnic minorities in northern Iraq also belong to the Shabbak people, who are mostly Shi’ite Muslims, although there are also Sunnis. The religious minorities ahl-e haqq (also called kaka’i) and yazidis are closely linked to Kurdish culture, and are today divided between members who regard themselves as separate peoples and others who see themselves as Kurds (see Religion).

Many of Iraq’s Christians also live on the Nineveh plain in the north. Among the Christian minority, whose numbers have fallen sharply since 2003 when the United States invaded Iraq and triggered severe civil war, include the Syrian-speaking ethnic minorities who call themselves Assyrians, Syrians or Chaldeans. In Iraq there are also Arab Christians and small groups of Armenians. In addition, there are very small minorities of Jews and Persians.

In the wetlands in the south between the Euphrates and Tigris live Shi’a Muslim so-called woodcrabs, or madan, who mainly feed on fishing and breeding water buffaloes. Large parts of the wetlands were dry during the Iran-Iraq war of 1980–1988 and in 1991 the regime brought down an uprising among wood carobs and other Shi’ites. After 2003, a number of projects were started to partially restore the wetlands, but only a small number of wood carvings have been able to return to their traditional lifestyles. In 2016, the UN agency Unesco decided to classify the wetlands and archaeological sites found in the same area as a world heritage site.

In the deserts in the west, Arab Bedouins live. Nomads make up less than one percent of the population, although many more come from now-settled Bedouin families.

More than two million Iraqis are estimated to have moved abroad under the rule of Saddam Hussein (1979–2003). Following the 2003 US invasion, tens of thousands of Iraqis returned to their homeland, while many regime supporters fled. Increasing violence then led to new escape waves, both within and out of Iraq. At most, around 2.2 million were estimated to be fleeing neighboring countries in 2008, including many who had fled before 2003. Many of those who fled were Sunni Arabs and Christians, and in particular, the Christian population has greatly reduced in size. In 2014, a new wave of refugees began in the country when the Islamic State terrorist group occupied large parts of Iraq.

Arabic and Kurdish are Iraq’s official languages. In the autonomous Kurdish region in the north, Kurdish is the administrative language. At the end of 2014, the local authorities initiated a process of turning Turkmen, Syrian and Armenian into officially recognized languages ​​within Kurdish autonomy.
In the Arab world there is a common spoken and written language called modern standard Arabic (fusha) which has a well defined structure based on the language of the Qur’an. This variant of Arabic is used in all media and official contexts and is taught in schools, and many Arabs believe it is the only “real” Arabic. However, standard Arabic is not spoken in everyday life and in terms of grammar and pronunciation it can sometimes differ quite sharply from spoken dialects. The spoken Iraqi dialects of Arabic are closely related to the dialects spoken in eastern Syria and the states of the Persian Gulf.

There are several Kurdish dialects, which differ so much from one another that they are hardly mutually intelligible. In Iraq, especially the central Kurdish, also known as sorani, is spoken. In Iraq, as well as in Iran and Syria, Kurdish is written in Arabic characters.

Arabs over 75%, Kurds less than 20%, in addition to Turkmen, Assyrians-Syrians and others

Arabic and Kurdish are official languages 1

On the same day the US leaves the country, Maliki-loyal security forces attack bodyguards working for Iraqi Sunni Muslim President Tariq al-Hashimi and an arrest warrant is issued against him for terrorist offenses. Hashimi takes refuge in the Kurdish autonomy government in Erbil and later moves to Turkey. Several Sunni parties in the House of Representatives are launching a boycott in protest against the treatment of Hashimi.

American soldiers out of Iraq

The US military presence formally ends on December 15. Three days later, the last soldiers leave the country. There are only a few hundred remaining who will be training Iraqi soldiers and protecting the US embassy.

Iraqi extremists establish themselves in Syria

Islamic State in Iraq secretly sends in a group of members in Syria, tasked with training jihadists and using money they receive from the Iraqi parent organization to found a militant movement that can spread Islamic State and al-Qaeda’s influence in the Syrian uprising against the president Bashar al-Assad, which erupted in the spring.

Inspired by the wave of protests sweeping across the Middle East, the so-called Arab Spring, thousands of people gather at the Liberation Square in Baghdad with demands for more jobs, better public service and an end to corruption. The protesters, however, do not require regime change.

Shial leaders back from Iran

Shiite minister Muqtada al-Sadr returns to his home country after four years in Iran, where he has completed his studies in Islam. Sadr’s supporters had previously fought against both US forces, Sunni rebel groups, al-Maliki’s government forces and rival Shi’ites. He now says he wants to work for peaceful opposition to the United States.