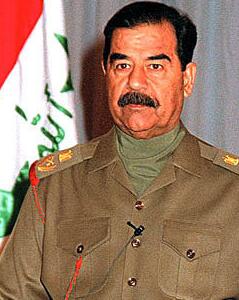 Since the beginning of the 2000s, Iraq has been marked by the legacy of the long-standing rule of the Baath Party and Saddam Hussein and the civil war that followed the 2003 US-led invasion of the country. The 2003 invasion, the fall of Saddam and the US’s long-standing occupation of the country led to major changes in both Iraq and the region. The United States disbanded the Iraqi army, which contributed to the foothold of violent jihadist groups in the country, including al-Qaeda. This in turn formed the basis for the establishment of the Islamic State (IS), and in 2013–2015 took control of large areas of northern Iraq as well as Syria. The terror group’s board and the military operation that drove the group back in 2016–2017 led to major destruction and drove hundreds of thousands to flee.

Politically, the removal of Saddam Hussein and the dissolution of the Baath party led to a Shia- dominated leadership in Iraq, with closer ties to Iran. But central authorities have failed to unify the country, and Sunnis, Kurds and other ethnic groups claim to be marginalized. In October 2019, the biggest demonstrations erupted since Saddam’s fall in Shia-dominated southern Iraq and Baghdad. The protesters demand an end to the political system that has emerged since 2003, which is characterized by corruption, sectarian rule, lack of public services and great Iranian influence. The demonstrations have been met with violence, but also led to the departure of the Prime Minister and the President.

The invasion of Iraq began on March 19, 2003. The military operation itself, called “Operation Iraqi Freedom,” was over in three weeks of bombing and ground offensive. The goal of the invasion, led by the United States and the United Kingdom, was to quickly secure control of Baghdad and defeat Saddam’s military forces. By mid-April, Saddam’s regime was defeated, and the most important cities brought under British and American control. 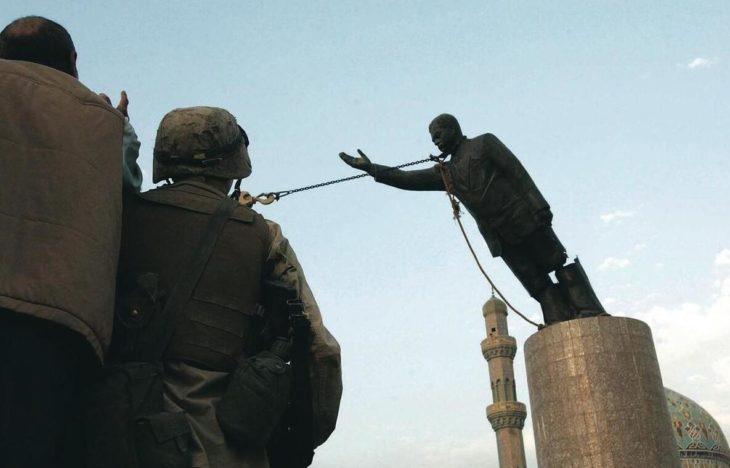 Gulf War. In April 2003, US forces gained control of most of Baghdad. The despised statue of Saddam Hussein at Shahid Square was demolished.

But the Americans and the British were not prepared to deal with the chaos that followed. What they thought would be a short-term operation with enthusiasm in the population became a long-standing occupation of Iraq that lasted – in various forms – until 2011. Large-scale looting and vandalism of private and public property right after the invasion led to enormous damage to Iraq’s infrastructure. It damaged the public’s confidence in the US temporary occupation authority established by the Coalition Provitional Authority (CPA) led by US Ambassador Paul Bremer. The CPA was responsible for directing the country to a transitional council, the Iraqi Governing Council (IGC), established in July 2003. The IGC consisted of 25 representatives from the country’s various regions, but was dominated by former exile oppositionists, especially Shiites and Kurds.

In the period leading up to July 2004, the United States, under Bremer’s leadership, sought to build a “new Iraq” by disbanding the country’s institutions and military and excluding them associated with Saddam’s Baath party from public posts. These decisions are now considered to be the main reasons for the growing opposition to US occupation, which escalated into a civil war that was to characterize much of the 2000s. The disintegration of the army caused 400,000 Iraqis to lose their jobs, leaving the country without a national defense while a new army was being trained. As a result, the United States lost control of its borders and important cities, while many from the army joined the violent resistance movement against the occupation.

In 2005, the first free elections in Iraq’s modern history were held. The election in January 2005 was at a constitutional assembly whose main task was to draft and present a new Iraqi constitution. This was put to the referendum in October 2005, and received support from 79 per cent of the votes cast; the resistance was greatest in south-dominated areas. There was broad agreement on a democratic governance and power distribution. The Kurds pushed for a decentralized form of government, and the constitution gave great local self-government in the provinces.

Then a new parliamentary election, under the new constitution, was held in December the same year – at the same time as the trial against Saddam Hussein began. The election was conducted with proportional representation throughout Iraq as one constituency, which helped secure the Shiites majority in parliament. The Kurds were also strongly represented. The Sunnis, on the other hand, received relatively few, partly as a result of a partial boycott of the election following a US-led offensive against rebels in Sunni Muslim Falluja in November 2004 that killed nearly 6,000 civilians. The Shiite-dominated list got 140 out of 275 representatives in the new parliament; Kurds got 75, Sunnis 40. Iraq got its first Shiite prime minister, Ibrahim al-Jaafari, and the first Kurdish president, Jalal Talabani. He is the first Kurdish head of state in an Arab country, and Iraq became the first Arab country since the 740 ruled by Shia. Sunni representatives were drawn into the new national unity government. In the Kurdish area, elections were also held for a regional assembly and local councils in the provinces of Dahuk, Erbil and Sulaymaniya, as well as in Kirkuk.

The election involved a dramatic shift in power. Under Saddam Hussein, the Sunnis, with a geographical center of gravity in central parts of the country, had the greatest influence, and dominated the civilian as well as the military apparatus. The Shiites constituted a slightly larger proportion of the population, but were in a situation of lower representation and less influence – and a rebellion among Shiites in southern Iraq after the Second Gulf War was wiped out and helped to make matters worse. The Baath regime was in conflict, partly armed, with the third large group of people, the Kurds in the north, who were given special status after the Second Gulf War and partly under protection.of the Northern Flight Ban Zone. After the regime change in 2003, this area further strengthened its autonomy. The Kurds are essentially Sunnis, but not Arabs, as is the rest of Iraq’s population.

The result of the 2005 elections and later elections was increased fragmentation along these ethnic and religious divisions, which had been less pronounced under Saddam. Important reasons for this were sectarian rhetoric from politicians, the occasional exclusion of Sunnis from the process, and the fact that the security situation forced civilians to seek protection from various sectarian militias. Because the election took place during a de facto military occupation, legitimacy under international law is disputed. At the same time, the security situation prevented some voters from participating in the elections, as well as the presence of international observers.