Japan ranks high on the list of countries in the world that have the most residents. But birth rates have been declining for a long time, and 2005 saw a small population decline for the first time in peacetime. If the number of residents continues to decline, according to the UN’s latest forecast, it may have dropped to around 100 million by 2060. 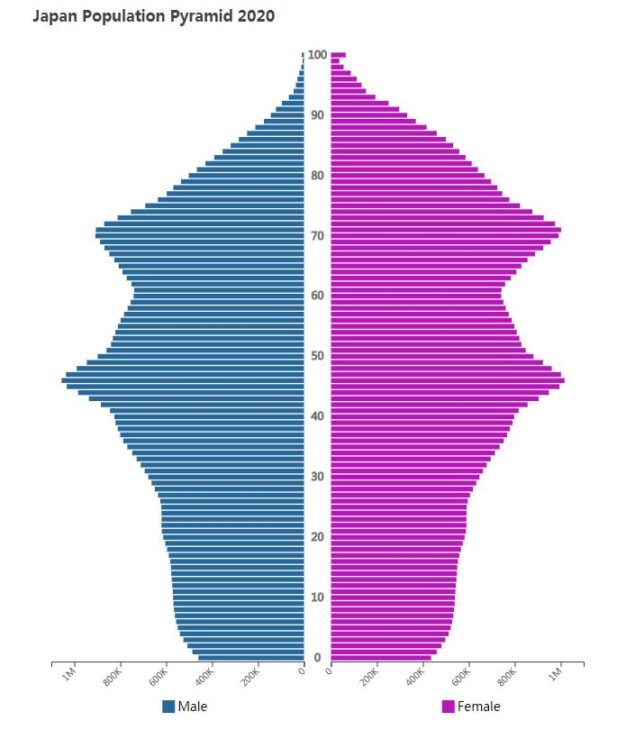 Both the average life expectancy and the proportion of the elderly have risen sharply over the past half-century and Japan is among the countries in the world where people live the longest. Only since the 1970s has the group 65 or older almost tripled and it is expected to continue to grow. Today, this age group represents just over 25 percent of the population; in 2050 it is predicted to be over one third. Of course, this demographic problem also means that the proportion of young people is shrinking. In 2014, almost 13 per cent of residents were estimated to be younger than 15 years.

As the mountain terrain makes large parts of the area completely or partially uninhabitable, the other areas are densely populated. The area around the Gulf of Tokyo forms a mega-city with about 20 million residents. All suburbs counted in daily commuter distance live in there close to 40 million people – about a third of the country’s population.

Over 98 percent of the population is of entirely Japanese origin. Also the largest minority, burakumin (“villagers”), are Japanese whose ancestors were separated from the rest of society when their occupations – garbage pickers, death diggers, butchers and more – were considered “unclean”. Burakumin is still an oppressed group, even though the authorities are trying to counteract discrimination. At Hokkaido, there is a small non-Japanese ethnic group, ainu, believed to be a remnant of Japan’s indigenous population and which today consists of some tens of thousands of people. From the 19th century, attempts were made to assimilate them into Japanese society, but in 2008 Parliament adopted a resolution recognizing ainu as an indigenous people with their own language, culture and religion.

During World War II, millions of Koreans were brought to Japan for forced labor, and now make up the country’s second largest non-Japanese minority – about 550,000 people. Although most of them are born in Japan, have Japanese as their mother tongue and pay taxes, they generally do not have full Japanese citizenship and limited access to community support. Only after strong protests in the early 1990s did the authorities begin to phase out the compulsion for even permanently resident Koreans to register and get their fingerprints taken every five years.

The country’s largest non-Japanese group is now the Chinese, which has increased rapidly in numbers since the turn of the millennium, to about 675,000 in 2011. Many of them are from Taiwan. In addition, Japan has about 200,000 residents of Philippine origin and just as many from Brazil.

The Japanese have no close relationship with any other language and it is not entirely clear to which language group it should be counted. But it has some similarities in grammar and structure with Korean. 1500 years ago, the Japanese retrieved written language and loan words from China. In an ordinary Japanese text, half of the characters can be Chinese. In recent years, more and more English loanwords have also been included.

Japanese also have different style levels and special language markers, keigo, which marks how polite or everyday someone wants to address another. In the business world, it is important to use keigo correctly.

In Chinese script, kanji, each character denotes a word. Since the Chinese characters do not cover all the Japanese inflections and endings, kanji has been supplemented with two phonetic syllable systems called kana alphabets: hiragana and katakana. As traditional Chinese writing, Japanese signage is read vertically from top to bottom and from right to left. A third system, romaji, is used to write Japanese words in Latin letters.

Prime Minister Kan resigns because of criticism of his leadership during the earthquake disaster. Yoshihiko Noda becomes his successor.

On March 11 in the afternoon, Japan suffered an extremely powerful earthquake in the Pacific Northeast northeast of Tokyo. A huge tsunami is sweeping over the northern parts of the east coast. The Fukushima Dai-ichi nuclear power plant is severely damaged and radioactive radiation leaks from the plant. More than 18,500 people perish or disappear in the disaster (see Modern History and the Triple Disaster 2011).