Nearly all Jordanians are Arabs. A large part of the indigenous people were Bedouins (nomads), but today most Jordanians are residents. About 60 percent of the population is estimated to be Palestinians.

The Palestinians came to Jordan mainly after the war against Israel 1948–1949, when the West Bank was incorporated with Jordan, after the six-day war in 1967, when Israel occupied the West Bank, and in connection with the Kuwait War 1990-1991. 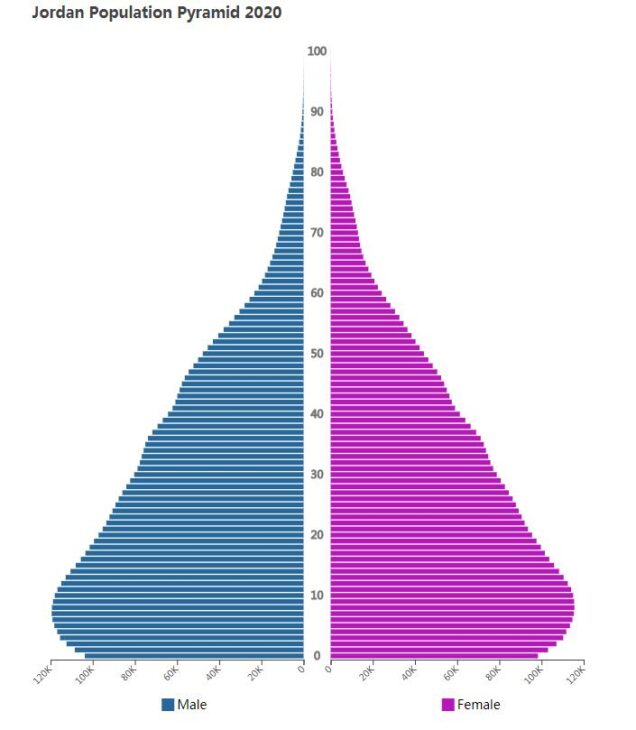 However, the dream of returning to a free Palestine has led many Palestinians to refrain from being integrated and instead stay in the ten refugee camps run by the UN agency UNRWA. At the beginning of 2020, more than two million Palestinian refugees were registered with UNRWA in Jordan. More than 15 percent of them lived in one of the UN camps. Almost everyone has Jordanian citizenship with the exception of about 120,000 refugees with their roots in Gaza, when this area was ruled by Egypt until the Six Day War in 1967. Since they have Egyptian passports, they do not get full citizenship in Jordan and thus cannot work in public service, vote in val et cetera.

When war broke out in Iraq in 2003, Iraqi refugees also sought refuge in Jordan. In a report compiled by Norwegian investigators in 2007 at the request of the Jordanian government, the number of Iraqi refugees was estimated at close to half a million. Most Iraqis have said they want to return home when the security situation allows. In 2014, more than 20,000 Iraqis were still registered as refugees in Jordan.

In recent years, Jordan has also provided a refuge for refugees from Syria. At the beginning of 2020, more than 655,000 Syrians were registered with the UNHCR. But Jordanian authorities believe that the real number of Syrians who have sought refuge on the other side of the border is at least twice that, and the rest have been more or less illegal in the country. The large number of refugees has put great pressure on the Jordanian social functions and on the country’s economy. After the Assad regime in Syria recaptured large areas of land from rebels, especially in the south, the largest border crossing between the countries opened in 2018, and Syrians then began to return (see Calendar).

In Jordan there are also minorities of Cherkesses, who immigrated from the Caucasus when the area was part of the Ottoman Empire, and Armenians. There are also small groups of Chechens, Drusters, Kurds and even Bosnians.

Jordan’s population growth is high, due to refugee flows, increased life expectancy and high birth rates, but has declined somewhat in recent years. The country has a young population that mainly lives in the cities.

Arabic is the official language. Minority languages ​​of greater importance do not exist, but in some villages they speak Cherkese. English is commonly used as auxiliary language in commerce and higher education.

Arabs (of which about 60% Palestinians) 1

Arabic is the official language

Prime Minister Bakhit resigns at the king’s urging after he has been criticized by various groups in parliament for failing to implement political reforms. Awn al-Khaswneh, judge of the International Court of Justice in The Hague, becomes new prime minister. The King also announces that from 2012, Parliament will become more involved in the process of forming government and appointing Prime Minister.

The committee that examined the Constitution proposes, among other things, that Parliament should be given more power, that a constitutional court should be set up and that the electable age of Parliament be reduced from 35 to 25 years to attract younger people to get involved in political work.

In a speech on TV on June 12, the King says that future governments should be appointed on the basis of the elected majority in Parliament. He would thus waive his right to appoint the prime minister. However, the king says nothing about when the changes will be implemented.

The committee will review the constitution

The King appoints a committee to submit proposals for amendments to the Constitution.

At the end of the month, opposition forces are again organizing demonstrations in Amman. Protesters and royalists clash and some thirty people are injured. The opposition demands that Parliament gain greater power and that the prime minister is elected by the people. One person is killed in connection with the protests.

King Abdullah dismisses the government and assigns a former prime minister, Marouf Bakhit, to appoint a new minister. Bakhit retains several members of the old government but also takes in an Islamist and five people who are said to belong to the left.

Inspired by the ongoing uprisings in Tunisia and Egypt, political activists organize demonstrations demanding political reform. The protests were fueled by the government raising fuel and food prices. In the city of Maan south of Amman, where Muslim fundamentalists have been active in the past, a rift between rival Bedouin tribes leads to several days of hostile riots.