Kazakhstan is a sparsely populated country. Large population movements have changed the composition of the population over time. Ethnic diversity is large, but most of the ethnic groups are small. Today, more than two-thirds of the residents are estimated to be ethnic Kazakhs and just under one-fifth are Russians.

The Kazakhs are a Central Asian Turkic people with Mongolian features. They lived for a long time mainly as nomadic herdsmen in the area that today constitutes Kazakhstan. From the mid-1800s, Russians and Ukrainians, as well as Muslim Uighurs from China, immigrated. 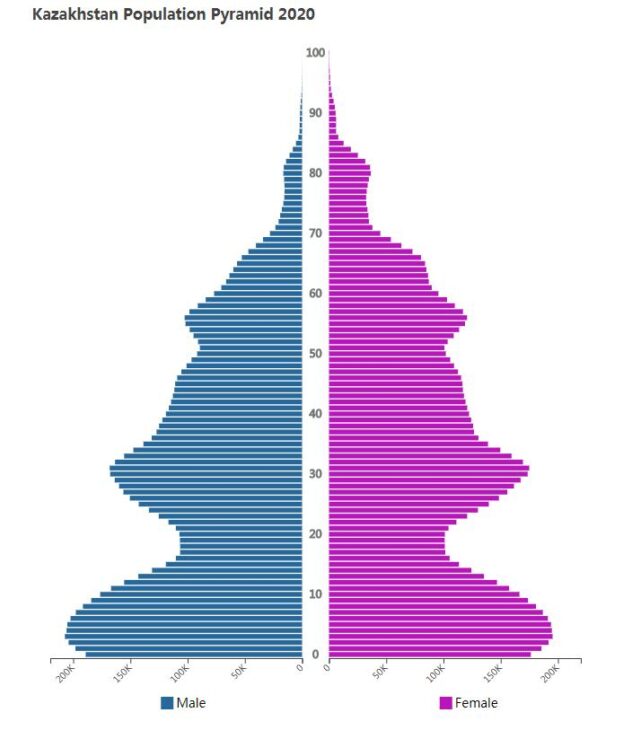 In the 1930s, Soviet leader Josef Stalin decided that the original population, the Kazakhs, would be “de-nomadized”. Forced collection of livestock management led to the death of over one million Kazakhs, while others fled to China or Afghanistan. In the context of the Second World War, Stalin drove entire groups of people from other parts of the Soviet Union to Kazakhstan – Volga Germans, Crimean Tatars, Soviet Poles and Greeks, Chechens, Ingushians and other Caucasus peoples, as well as Koreans from eastern Siberia (see Modern History).

It is estimated that over 120 people are living in Kazakhstan. The Russians dominate in the north and are predominantly urban. Before independence in 1991, the Russians were slightly more than the Kazakhs, but their share has since fallen as a result of emigration to Russia.

The ethnic groups also emigrated during the 1990s. The German-speaking minority declined sharply as more than half a million Germans left the country. Often, they were best educated. At the same time, mainly Kazakhs immigrated from neighboring countries. There are still Kazakh minorities in neighboring countries. Most, just over a million, live in the Chinese province of Xinjiang.

The Kazakhs have been divided into three “hordes” since the 17th century, which according to myth derive from three brothers. The hordes in turn are divided into clans and large families. The lineage used to decide which pastures a kazak was allowed to use, and even today the hordeship has some significance for how kazaks relate to each other.

Anti-Russian riots in Almaty 1986 are seen by some historians as the starting point for the entire Soviet Union’s dissolution. After Kazakhstan’s independence, however, the relationship between Kazakhs and Russians has been largely peaceful, although there are small groups of ultranationalists on both sides.

Kazakh gained a special status as a national language in 1989. Since 1995, Russian has also had official status, albeit somewhat subordinate to Kazakh. Almost everyone is fluent in Russian, and the language dominates in administration, business and higher education. Kazakh’s position has been strengthened since independence, but around one-third of the population does not speak the language at all.

Kazakh is a Turkish language, closely related to Kyrgyz and Uighur. It used to be written with the Arabic alphabet. From 1928 to 1940, the Latin alphabet was used, but then switched to Cyrillic (as Russian). Since the collapse of the Soviet Union in 1991, there have been plans to return to the Latin alphabet.

Localities in the country often have both a Russian and a Kazakh name. The authorities recommend using the Kazakh names, such as Almaty instead of the crushed Alma-Ata form. But there is also resistance from the Russian-speakers against this “Kazakhization”.

Kazakh is the national language, Russian is the official language

President’s Party The Fatherland’s light wins 88 percent of the vote in the parliamentary elections and receives all 98 electable seats. No other party can pass the seven percent barrier to the legislative assembly.

Nazarbayev dissolves parliament and announces new elections two years in advance. The election will be held in August 2007.