The country’s citizens, Kuwaiti, are Arabs and speak Arabic. They make up just a third of the total population. The rest of the residents are largely foreign guest workers from Asia and from other Arab countries. English is often used as a language of help.

For many of the Asian migrant workers, conditions in Kuwait can be difficult. As a result of reports of deaths, the Philippines has occasionally banned its citizens from seeking employment in Kuwait (see Calendar). In addition to the legal guest workers, many foreigners have lived and worked in the country without a permit. 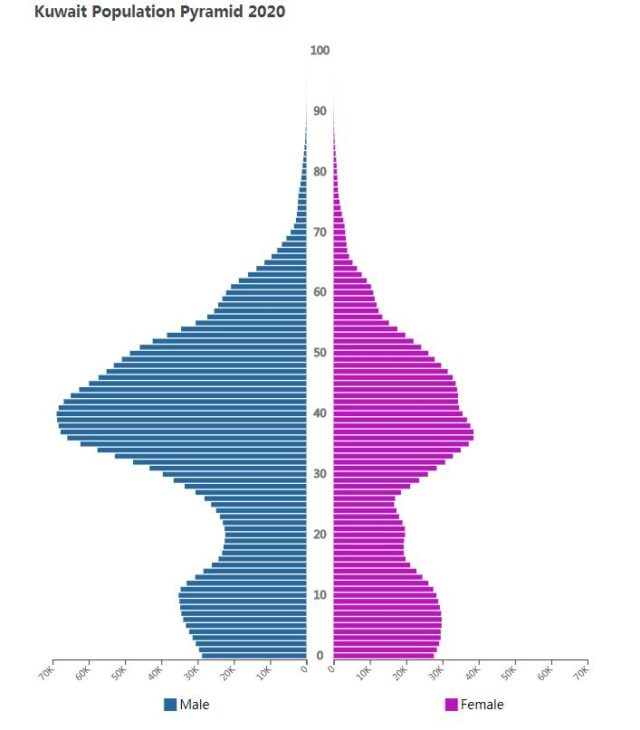 In Kuwait there are also more than 100,000 stateless Arabs, so-called bidu (following the Arabic word for stateless). Many of them are Shiite Muslim nomads who came to Kuwait in the 1950s from Iraq, Jordan, Syria or Iran and who either did not apply for independence in 1961 or lacked the required documents. Others came to the country to work during the 1960s. The bidu also includes children of Kuwaiti mothers with fathers who are bidu or foreigners.

During the 1960s and 1970s, Bidun had the same rights as Kuwaiti citizens but not voting rights (they were called “legal residents without nationality”). In the following decades, and especially after the Iraq-Iran war in the 1980s and the uncertainty in the society that led to this, the government’s view of Bidu degraded to “illegal residents” changed. Since then, they have had difficulty accessing health care and education and many are living in poverty.

In 1999, they were promised Kuwaiti citizenship if they could prove that they had lived in the country since 1965, but the process of granting them citizenship has been very slow. Although their situation improved somewhat during the 2000s (at least on paper), most are still stateless and thus lack the rights of Kuwaiti citizens. Demonstrations carried out by Bidun in protest at how they are treated have been brutally beaten by the police.

At the end of 2014, Kuwait agreed with the Indian Ocean Comoros to bid for Comorian citizenship; in return, Kuwait would help build schools and hospitals in the Comoros. Most bids have rejected the proposal, as those as Comorian citizens could be expelled from Kuwait, which is harder to do as long as they are stateless.

In 2017, 37 percent of the residents were estimated to be under 15 years, according to the UN development program UNDP.

Almost the entire population lives in Kuwait City or in any of the smaller coastal cities near the capital.

The government is leaving

Nasir announces that he and the government will step down.

After several weeks of protests against corruption and restrictions on political and civil rights, protesters storm into the parliament building and demand that Prime Minister Nasir resign as prime minister. At the same time, Nasir is increasingly being pushed by opponents in Parliament. The main charge is that the government would have paid bribes to 15 MPs in exchange for their support.

In the middle of the month, a new vote of no confidence is requested, which the government wins by a good margin. The opposition, however, immediately calls for the resignation of Nasir’s departure.

The government goes – and comes back

To avoid the awkward hearing requested in February, Sheikh Nasir and his government choose to resign. It will be reinserted within a week.

New protests against the government

The protests against Nasir continue to be inspired by the wave of insurgency in North Africa, “the Arab Spring”. Three opposition parties demand that the government be reformed and a new prime minister “with the capacity to adopt a reform program” be appointed. Shortly thereafter, a request from MPs comes that ministers in the government should submit to a new hearing on corruption and neglect of their missions.

The Prime Minister can pass a vote of confidence

Nasir survives, by a small margin, another vote of confidence in Parliament. The reason for the vote is this time the government’s handling of regime-critical demonstrations at the end of 2010. A handful of protesters, including a couple of MPs, had been injured since the crackdown police were deployed.