Most of the people of Kyrgyzstan live in the northern part of the country, where the Kazakh steppe extends into the country. The Fergana valley in the southwest is also densely populated, as is the area around Lake Issyk-Kul. Nearly three-quarters of the population is Kyrgyz. The largest minority group are the uz cups.

Russians used to be the largest minority group, but their share of the population has decreased as a result of emigration. In the country there are also dungans (Turkish speaking), Uighurs (with roots in Xinjiang province in China), Tajik, Turks, Kazakhs, Tatars and Ukrainians. 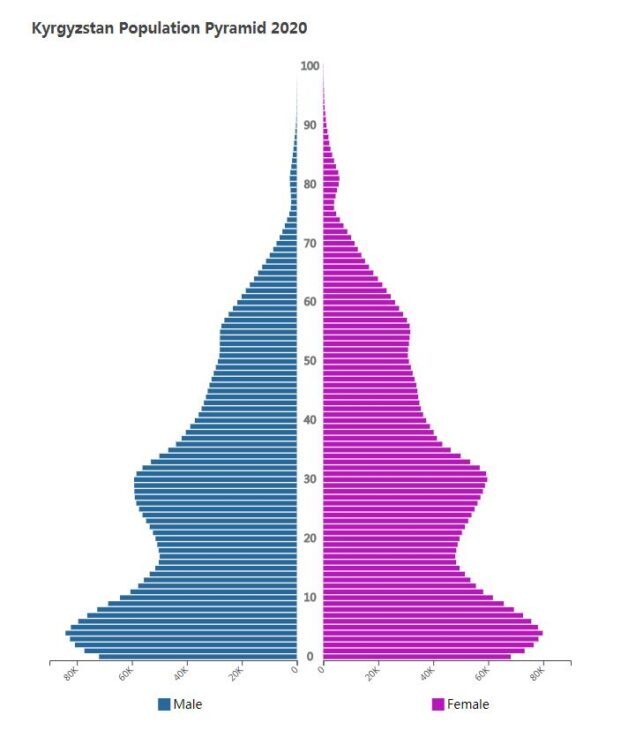 Ethnic diversity depends, among other things, on Soviet leader Josef Stalin’s forced relocation of various peoples to Central Asia, especially during the 1930s and 1940s (see Older History). In addition, with the beginning of 1990 – the year before Kyrgyzstan’s independence from the Soviet Union – hundreds of thousands of non-Kyrgyz, mainly Russians, emigrated with concerns about discrimination in the future state. Thus, above all, well-educated professionals disappeared. Nowadays, however, some Russians have returned.

An estimated 750,000 Kyrgyz citizens work abroad, the majority in Russia and Kazakhstan.

Non-Kyrgyz sometimes state that they feel discriminated against by Kyrgyz. For example, they may find it difficult to get higher services in the state sector. Russians and Ukrainians are underrepresented in politics, and Dungans and Uighurs often find it difficult to be socially accepted by the majority people.

Independence did not lead to ethnic conflicts in Kyrgyzstan, as it did in other former Soviet republics. But there are strong ethnic tensions in the Fergana Valley, where a complicated boundary line contributes to land and water disputes between Kyrgyz, Uzbek and Tajiks. In 1990, at least 500 people were killed in riots between Kyrgyz and the Uzbek, and in 2010 around 470 victims were killed in similar riots. In the Osj in the Fergana Valley, the uz cups are the majority and dominate the business world. It has created dissatisfaction and mistrust among the Kyrgyz in the city.

In 1989, Kyrgyz became official language instead of Russian, which had been used in business and politics. In 1996, Russian was again made official language alongside the Kyrgyz in the areas where Russian-speaking residents predominated.

Kyrgyz is a Turkish language in the Altai language family, most closely related to Kazakh and Uzbek. The first texts in Kyrgyz were written in Arabic writing in the 1910s. In 1928, Kyrgyz began writing with Latin alphabet, which in 1940 was changed to Cyrillic. Nowadays there is a decision to return to Latin writing, but no discussion about really doing this is currently not being conducted.

Many Kyrgyz, especially in the capital Bishkek and other cities, have inadequate knowledge of Kyrgyz. According to a 2004 language law, the use of Kyrgyzstan in education, administration and the media is to increase. The president, the head of government and the Speaker of Parliament must by law master the Kyrgyz.

Russia’s great importance to Kyrgyzstan’s economy makes knowledge of Russian important, not least for anyone who wants to work in Russia. Many Kyrgyz are re-branding their names, which after independence were adapted to Kyrgyz. In the countryside, however, Russian language skills have declined drastically since independence, especially among young people.

Among a number of minority languages ​​are Uzbek, Turkish, Tartaric and Ukrainian.

Kyrgyz and Russian (in some parts) are official languages; Among the minority languages ​​are Uzbek, Ukrainian and Turkish

The entire state of Kyrgyzgaz will be sold to Russian Gazprom, the Kyrgyz gas company announces. Russian gas supplies will replace gas from Kazakhstan and Uzbekistan, which has made gas supplies uncertain and expensive.

Parliament ratifies an agreement with Russia, which will retain its military base in Kyrgyzstan for a further 15 years from 2017.

Protest meetings are held outside Parliament demanding that the three imprisoned opposition members be released. The protesters also demand nationalization of the country’s mines and that new elections are held and the constitution is rewritten.

Opposition is arrested after protests

Three parliamentarians from the opposition Fatherland have been arrested on suspicion of coup attempts, after leading a protest in Bishkek where protesters stormed the government building. The protesters demand the nationalization of the Canadian-owned gold mine Kumtor.

The Social Democrats, Dignity and the Motherland form a new coalition government. The three parties together have 69 of Parliament’s 120 seats. President Atambayev appoints Social Democrat Jantörö Satybaldyev as new Prime Minister. Satybaldyev is supported by 111 members of parliament, ie by the majority in the opposition.

Dismissal from the government

Dignity and the Fatherland leave the government after demanding the departure of Prime Minister Babanov. The conflict concerns the country’s economy as well as allegations that Babanov would be involved in corruption. President Atamabayev instructs the Social Democrats to form a new government.

The government lets in NATO

The government authorizes the NATO military alliance to use Kyrgyz territory to evacuate vehicles and military equipment from Afghanistan.