There are around 50 different ethnic groups in Laos, but many of them comprise only a few thousand individuals. In the official statistics, the population is divided into three groups: lowland, highland and highland. A small group of the Highland Laotian Hmong people has long waged a guerrilla war against the regime.

The largest group is the Lao Lum or Lowland Laotians, made up of the Thai-Lao people and a number of smaller, Thai-speaking people such as Thai Lady, Thai Daeng, Thai Yuan and Phuthai. Lao lum lives mainly in the lowlands and provides for rice cultivation. 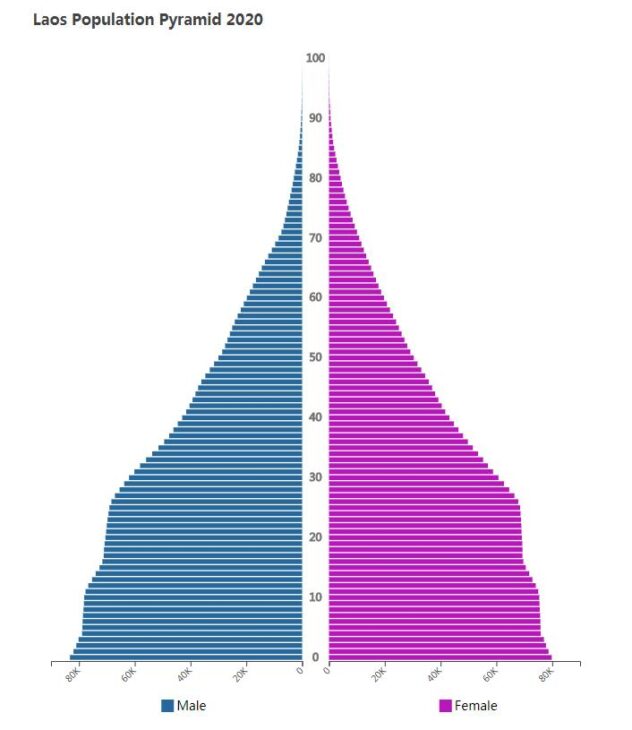 The Lao people immigrated from China between the 800 and the 1100s and quickly succeeded in cuprating the original residents (see below). During the French colonial rule (1893–1953), the position of the Lao people was strengthened by often being given positions in colonial administration. Even today, the group dominates politically and socially.

The second largest group is Lao Theung or the Inland Laotians. These include the monkhmer-speaking peoples who are considered to constitute the country’s original population, such as the lamb and the chambers in the north as well as the praise, bridge and kui in the south. These people live in the mountain regions and feed on burning and hunting.

The third group is called Highland Laotians. Dominating among these peoples is the hmong (or meo), who immigrated from the north from the 19th century and settled in the higher mountain regions of northern Laos.

There are also small Chinese and Vietnamese minorities in the country.

The relationship between the Lao people and the many ethnic minorities is often strained. The economic reforms carried out by the communist regime since the 1980s are considered to have favored the Lao people at the expense of the minority people, which led to increased ethnic tensions. A small group within the hmong people has waged a guerrilla war against the regime since the communist takeover of power in 1975. The regime has responded with bomb boards against hmong areas.

The conflict has led to almost one-third of Lao’s hmong population of originally about 300,000 members having moved to the United States and Thailand. Laotian police and military are accused of persecuting and harassing hmong in their hunt for opponents within the group. There are suspicions that hmong members who were forced to return after moving to Thailand have been treated badly on their return, for example being jailed without a charge.

Laos is sparsely populated and nearly two in three residents live in the countryside. The most densely populated is the Mekong Valley, while the mountainous regions are sparsely inhabited. The population is young; In 2019, 32 percent of Laotians were estimated to be under 15 years. The population is growing rapidly even if growth rates have slowed somewhat since the 1990s, partly through state campaigns for the use of contraceptives.

Lao is the official language and is spoken by almost two thirds of the population. It is a Thai language, akin to the languages ​​spoken in Thailand. About one million Laotians speak monkhmer language. In addition, there are a number of minority languages, including Tibetan Burmese languages. French and English are widely used as a trade language.

lao is official language; In addition, monk Khmer languages, Tibetan Burmese languages ​​and others are spoken.