Over 90 percent of the population of Lebanon is usually referred to as Arabs, although the historical origins of the residents are very mixed. The Lebanese do not identify themselves primarily as Arabs, but religion, political affiliation and kinship determine which “people” they count on. Especially religious affiliation is important. The non-Arab minority is mainly Armenians, Kurds, Assyrians / Syrians, Turks and Greeks.

The biggest dividing line is between Christianity and Islam. At the last census, which was done in 1932, the Christians were in scarce majority. Since then, no new census has been made. The question of which of the groups is the largest is politically sensitive. Since political power is distributed according to religious affiliation (see Political system), both sides have an interest in exaggerating the size of their own group. In the early 1980s, the number of Muslims was estimated at 57 percent and the proportion of Christians at 43 percent. Since then, the share of Muslims is estimated to have increased to around 60 percent, while the proportion of Christians has dropped to just under 40 percent. This is because Muslim families have more children than Christians, while more Christians than Muslims have emigrated to other countries. 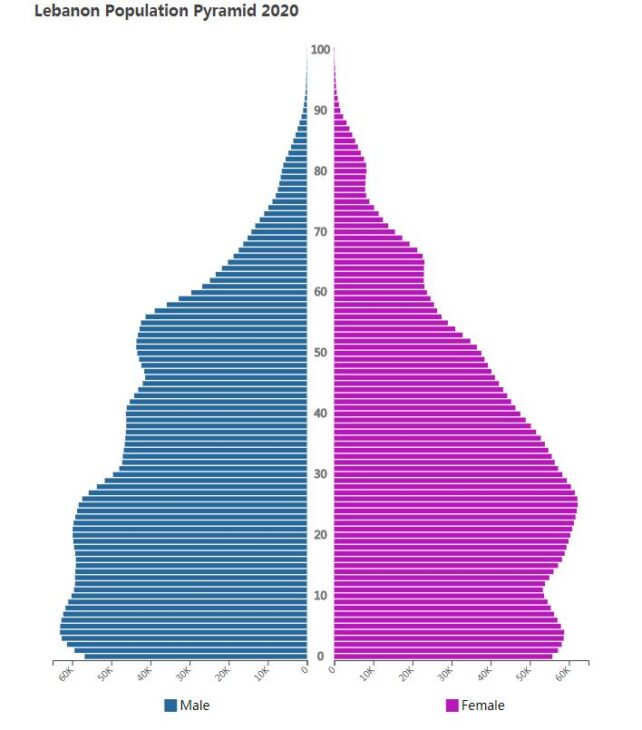 Sunni Muslims often work in trade and politics and live mainly in the north, along the coast and in the cities. The Shia Muslims have long been the poorest and least influential group. They dominate the southern parts of the country and poor residential areas in southern Beirut.

Just over 5 percent of Lebanese are estimated to be Druses, a religious group with Shi’ite Muslim character.

Other Muslim groups are Kurds, who mainly immigrate from Syria, Ismailites and Alawites. According to some sources, the latter are believed to be derived from Lebanon’s original residents.

The largest and most influential Christian group is the Maronites, which comprise about one-fifth of the population. Like many other groups, the Maronites have been able to preserve their identity by living quite secluded in the mountains of Lebanon. The group has formal ties to the Roman Catholic Church and close contacts with France. Maronites and drushes are scattered in the mountains and in rural villages, but many live in Beirut.

In Lebanon there are also Greek Orthodox and Greek Catholic Christians. Other Christian groups are Catholics, Protestants, Assyrians (Nestorians) and Syrian Orthodox (Jacobites). The largest non-Arab group is the Christian Armenians, most of whom came to Lebanon as refugees from Turkey after the First World War (1918).

Several hundred thousand Palestinian refugees live in Lebanon. Most came after the state of Israel was formed in 1948. The majority are Sunni Muslims, but there are also some Christians. A large number live in refugee camps with limited rights. Only a few rich, especially Christian, Palestinians have been granted citizenship (see Social Conditions).

Lebanon is the country that has received the most refugees from the civil war in Syria. At the beginning of 2019, Lebanon still had about one million Syrians registered as refugees. Authorities have estimated that another half a million Syrians traveled to Lebanon during the war years. This means that every fourth person in the country is a Syrian refugee. The pressure from the refugee stream has triggered conflicts between Syrians and the Lebanese population. Among other things, a large number of municipalities have introduced a nightly curfew for Syrians. In 2015, Lebanon introduced visa restrictions for Syrians. As a result of the changed war situation of 2018, when the Syrian regime has taken back many disputed areas, Syrians have been encouraged in various ways to return home.

Lebanon also houses around 250,000 guest workers. Many of them come from Asia.

Since the end of the 1890s, Lebanese have been emigrants. In 1960, approximately 2.5 million Lebanese lived abroad, primarily in the United States. During the civil war another hundreds of thousands of people emigrated. Immigrated Lebanese and their descendants were estimated to be at least 12 million in 2005, most of whom were resident in Brazil. Ten years later, the emigration colony was estimated to be between 15 and 20 million. More precise figures are missing. The majority of emigrants are Christians.

Arabic is officially language and understood by everyone. The French, which spread under the French rule (see Older history) are protected by Western-influenced groups. Many also speak English. In ancient times, Phoenician and Aramaic were spoken, the language believed to have been what Jesus used.

On November 30, Prime Minister Najib Miqati surprisingly announces Lebanon has transferred its share of the financial support to the special Hariri tribunal despite opposition from Hezbollah and Maronite Michel Aoun, leader of the Free Patriotic Movement, which is also part of the government.

On July 29, when the four defendants were still under arrest, the tribunal formally publishes the charges and names the accused.

A new crisis is likely to arise when the UN tribunal submits to the Lebanese chief prosecutor a charge against four members of Hezbollah suspected of the assassination of Rafiq al-Hariri. The prosecution document contains a request that the four be arrested. Miqati says the government should deal with the issue “responsibly and realistically” and he later clarifies that he intends to cooperate with the tribunal.

Najib Mikati takes office as prime minister and wins a vote of confidence in parliament since the opposition abstained.

Since drus leader Walid Jumblatt changed his foot and no longer supports Hariri, but instead joins behind Hezbollah, Hezbollah has great influence over the formation of a new government. Hezbollah and its allies launch the rich businessman Najib Mikati as new prime minister and he is supported by a majority of the members of parliament. Hariri’s supporters respond with vigorous protests on the streets of Tripoli as well as minor protests in Beirut and some other cities.

The government falls after the ministerial resignation