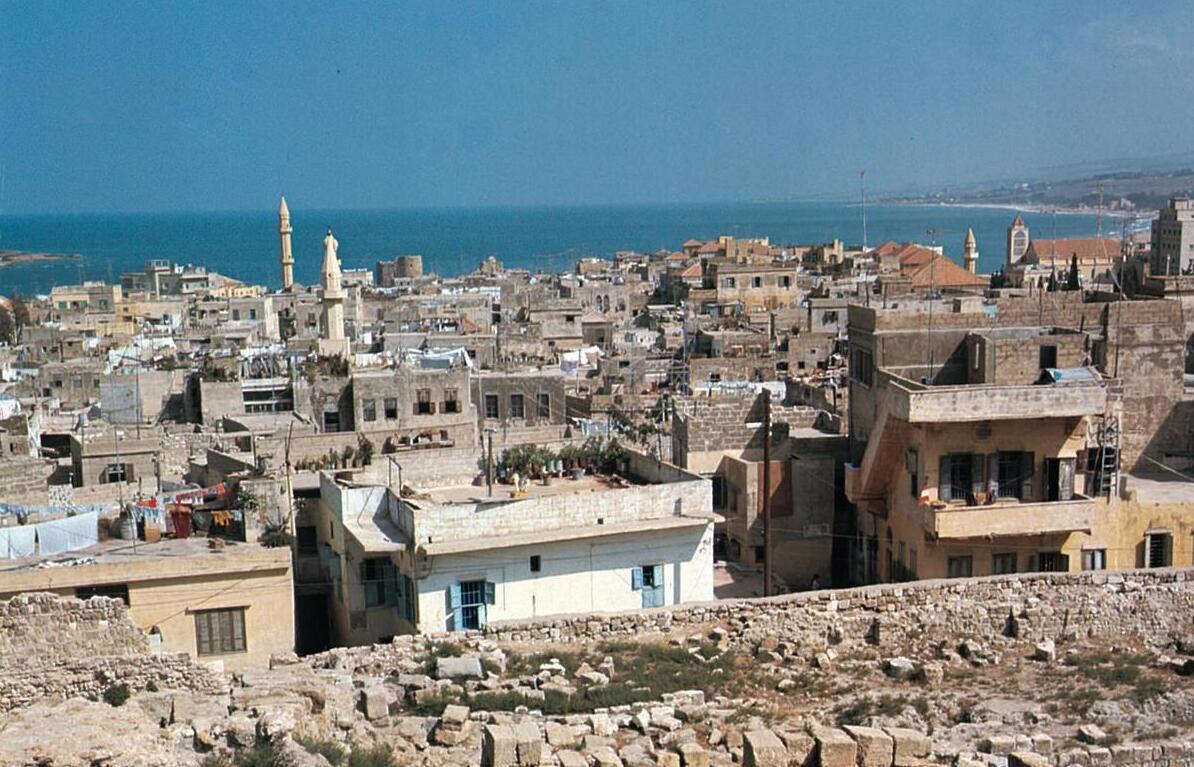 Lebanon is a republic in the Middle East (Southwest Asia). The country borders Syria in the north and east, and Israel in the south, with a coastline to the Mediterranean in the west. The capital is Beirut. The population is around six million. The official language is Arabic, but French and English are widely used.

Lebanon is a nation-state of modern date, but its history goes far back. The coastal area was populated by the Phoenicians from about 3000 BCE. Ruins in Byblos, Beirut, Saida, Sarafand and Tyr testify to a rich art and trade life.

Lebanon has long belonged to historic Syria, also as part of the Ottoman Empire. The country became independent in 1943. In recent times, Lebanon has undergone both civil war and foreign invasion, and is also covered by the Middle East conflict.

The name Lebanon has Semitic roots and means “white” – presumably a reference to the snow-covered Lebanon mountains. Lebanon’s national anthem is Kulluna lil watan lil ‘ula lil’ alam (‘All together, for our country, for our flag and our honor’).

Lebanon is a small country of 10,452 square miles; the size of Aust-Agder. The coastline to the Mediterranean is 225 kilometers. The lush coastal landscape to the west and the Bekaa Valley to the east are separated by the mountains of Lebanon. Against the border with Syria lies Anti-Lebanon. Both mountain ranges have peaks over 3000 meters above sea level and snow from December to May. The Bekaa Valley is the most important agricultural area in the country.

Lebanon has a typical Mediterranean climate with long, hot summers and cold and rainy winters, with significant snowfall in the mountains. The whole country is inhabited, with the greatest concentration along the coast, where also the largest cities (Beirut, Tripoli, Saida) are located.

Extensive deforestation took place already in ancient times, including the cedar tree – Lebanon’s national symbol – which has led to erosion. Industry in modern times has contributed to air and sea ​​pollution. Oil and gas deposits have been identified in the sea. Other mineral resources include iron ore, limestone and salt. 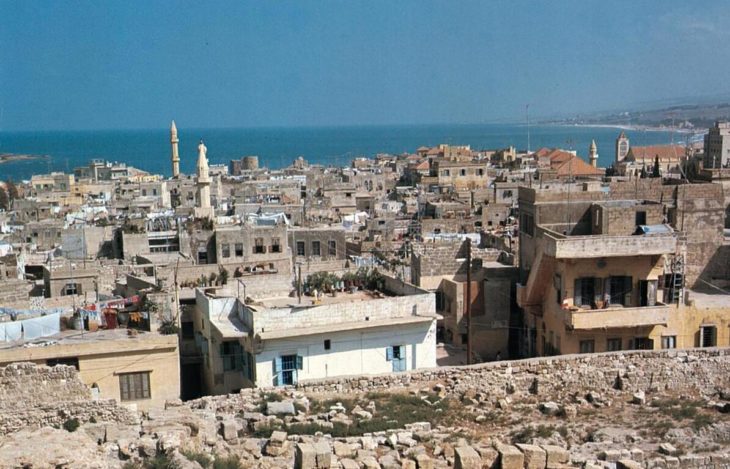 Lebanon has a complex population and a high degree of urbanization. Most residents live in cities (88.6 percent in 2018). The ethnic composition consists of Arabs (95 percent), Armenians (four percent) and other ethnic groups (one percent). Lebanon has a high proportion of guest workers, especially from Egypt and Syria. The number of Palestinians in the country is disputed. The UN Special Palestinian Refugee Agency (UNRWA) operates with an official figure of 455,000, while recent studies estimate that only around 270,000 Palestinians reside in Lebanon, most of whom live in refugee camps that have evolved into villages and over time. neighborhoods. As a result of the civil war in Syria, in late 2017, there were about 1.5 million Syrian refugees in Lebanon, according to the United Nations High Commissioner for Refugees (UNHCR).

About a quarter of the population is under 15, and life expectancy is above the world average, with 77.8 years. Significant social disparities with rural poverty, as well as many years of war, have contributed to migration and urbanization. The economic differences between rich and poor increased in the 1990s, and about 28 percent of the population lives below the poverty line (2009).

Lebanon has the greatest religious diversity in the Middle East. The country has 18 officially recognized religious groups, eleven of whom are Christians, and all branches of Islam and Christianity. 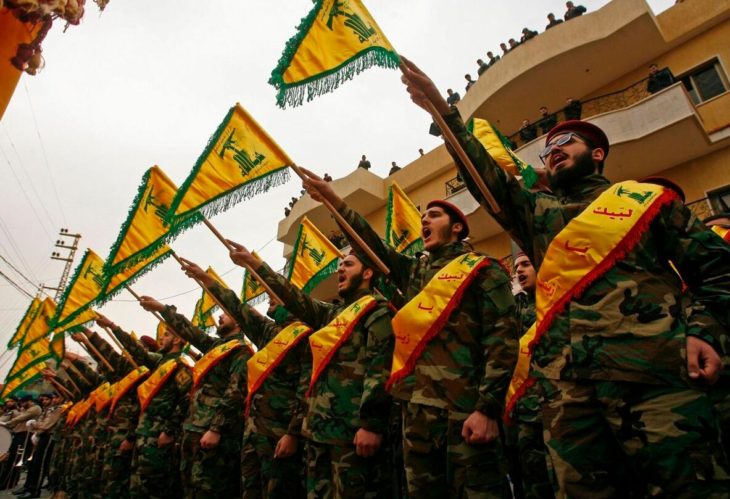 The Shiite militant organization Hezbollah exercises great control in Lebanon, especially in the south of the country, and has support from Iran. Hezbollah has armed militias, but also runs social work and political activities, and is represented in the Lebanese parliament. In 2006, Israel invaded southern Lebanon in a failed attempt to fight Hezbollah.

Lebanon is a republic, and has in principle held on to a multi-party democracy, although elections have not been held for periods. The Constitution dates from 1926 and the French mandate, but has been amended several times. The courts are based on French custom, in addition there are religious courts that handle private matters.

Lebanon is one of the few countries with a form of governance based on the consensus model, so-called consociated democracy. The idea is that power should be distributed proportionally to the size of the many religious groups in the country.

Based on the census of 1932, which showed a Christian majority, it was decided that the president should be a Maronite, a Sunni Prime Minister, a Shiite Muslim leader, and a Greek Orthodox Deputy Prime Minister. All the 18 religious groups were represented in parliament. The Taif Agreement of 1989 changed the representation of Christians and Muslims to 50-50, and extended the powers of the prime minister and parliament at the expense of the president. The parties are, with few exceptions, affiliated with religious groups.

Lebanon is a member of the UN and the UN’s special organizations, including the World Bank, and by the Arab League and the Organization for Islamic Cooperation, among others. Lebanon played an important role in the drafting of the 1948 Human Rights Declaration and the International Refugee Court, but has not ratified the 1951 UN Refugee Convention. 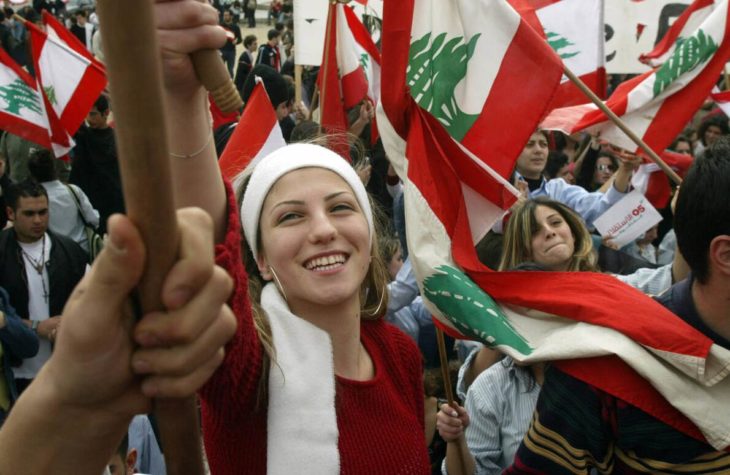 The car bomb attack on Prime Minister Rafiq al-Hariri on February 14, 2005 triggered major public demonstrations against Syria’s military presence and impact on Lebanese politics. The result was that Syrian forces withdrew from the country, and the demonstrations were named “Cedar Revolution” after the cedar tree in Lebanon’s flag.

The early history of Lebanon is woven into the history of the Levant and the Middle East. Traces of settlements have been found dating back to 5000 BCE, and Lebanon is mentioned in sources from as far back as 4000 BCE. In ancient times, the coast was dominated by Phoenician city ​​states, later various parts of Lebanon became subject to Egyptian, Assyrian, Greek and Roman rule. In the 600s began a long period of Arab and Muslim rule in the form of changing dynastic empires. Despite strong cultural influence, the mountains of Lebanon remained a center of gravity for non-Muslim minorities who retained a relatively high degree of autonomy.

In the 12th-12th centuries, European crusaders conquered several of the largest cities in Lebanon during the First Crusade, and established several localized principalities by the feudal model. Strong ties arose between Christian European kingdoms and Lebanon’s Christian population during the Crusader period, and in 1182 the local Maronite church was incorporated into the Catholic Church.

Late in the 16th century, much of what is now Lebanon became an independent province of the Ottoman Empire. Due to a large Christian majority in the Lebanese mountains, this province was repeatedly the subject of European interference. It is estimated that as many as half of the Lebanese population died of starvation in the period 1915-1918, as a result of environmental conditions and trade blockades enforced by both the Ottoman Empire and European powers. 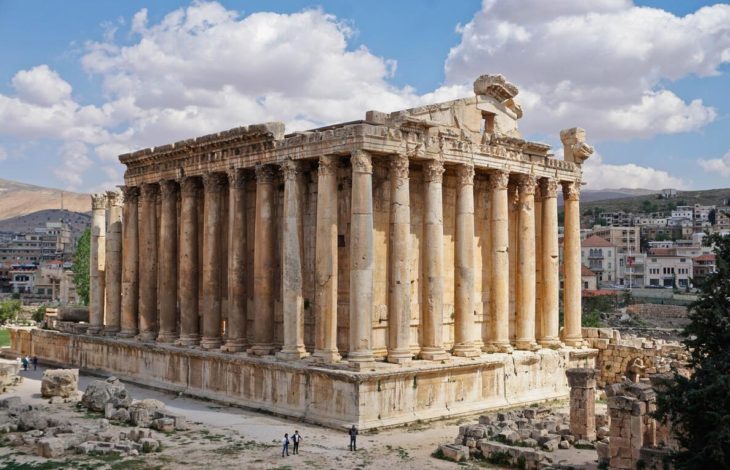 Lebanon has a rich cultural history and has been an important meeting point between East and West and several religions and empires throughout history. In Baalbeck are the ruins of the Roman Bacchus Temple.

After the collapse of the Ottoman Empire during World War I, France assumed control of Syria, including Lebanon, and from 1920, Lebanon was ruled as a separate state under the mandate of the League of Nations. Lands east and south of the Lebanon Mountains, which were mainly populated by Muslims, were incorporated into the new state, thereby weakening the Christian majority. Moreover, a majority of the Muslims preferred to belong to a larger Arab state and had strong ties to Syria. In 1926, the Lebanese Republic was proclaimed, and in 1943 the first independent Lebanese government abolished the mandate. The last French military forces left Lebanon in 1946.

Lebanon was on the losing side in the first Arab-Israeli war in 1948, refraining from participating in the Six Day War against Israel in 1967. The Palestinian Liberation Organization (PLO) began its military actions against Israel from southern Lebanon in the 1970s. This led to reprisals against Lebanon, primarily Israeli invasion of southern Lebanon in 1978. The invasion triggered a UN Security Council decision to send a multinational peacekeeping force, UNIFIL, to the region. In 1982, Israel again invaded Lebanon with the goal of driving the PLO out of the country. Although the goal was reached already after two months, Israeli forces remained in southern Lebanon until 2000, with the support of local Christian militias. After 1985, local resistance groups filled the void after the PLO, and especially the Shiite militia Hezbollah became a factor of power. Israel invaded southern Lebanon again in 2006 to defeat Hezbollah.

Lebanon experienced a very devastating civil war from 1975 to 1990. It is estimated that as many as 150,000 Lebanese perished as a direct result of the civil war, while about one million were displaced from their homes. The triggering factor was Palestinian presence in the country, as well as socio-economic, political and religious contradictions. The conflict was mainly between a coalition of right-wing Christian groups on the one hand, against the PLO ally with left-wing and Muslim groups on the other. Shifting internal alliances and foreign interference helped prolong the conflict. Syria sent military forces to Lebanon in 1976, and these were soon given a peacekeeping mandate by the Arab League. 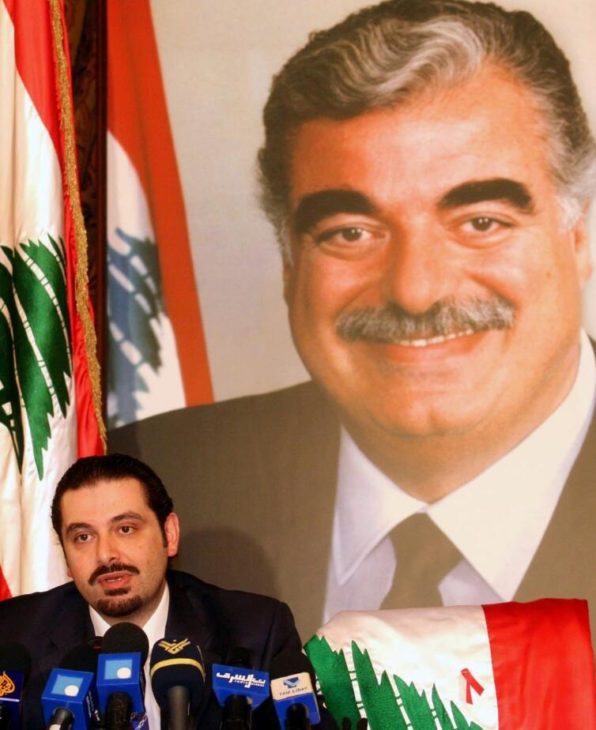 The 2005 assassination of Prime Minister Rafiq al-Hariri (pictured behind) had major consequences for Lebanese politics, including divisions between more Western-oriented politicians and those leaning against Syria and other Middle East supporters. The son Saad al-Hariri (in the foreground) later became prime minister of Lebanon.

The civil war was formally concluded with the Taif Agreement in 1989, which led to minor changes in Lebanon’s political system and adjusted the distribution of power between the country’s religious groups. Most militia were disarmed at the end of the civil war, with the exception of Syrian-allied Hezbollah.

The assassination of then prime minister Rafiq al-Hariri in 2005 triggered the so-called Cedar Revolution, which led to the withdrawal of Syrian forces from Lebanon that year. Continuing Syrian and Iranian influence in Lebanon has led Hezbollah to build up as a significant power factor. Since 2005, the Lebanese political landscape has been divided between pro-Syrian and more pro-Western groups and, following the outbreak of civil war in Syria in 2011, the same dividing lines are now between supporters and opponents of Syrian President Bashar al-Assad’s regime. 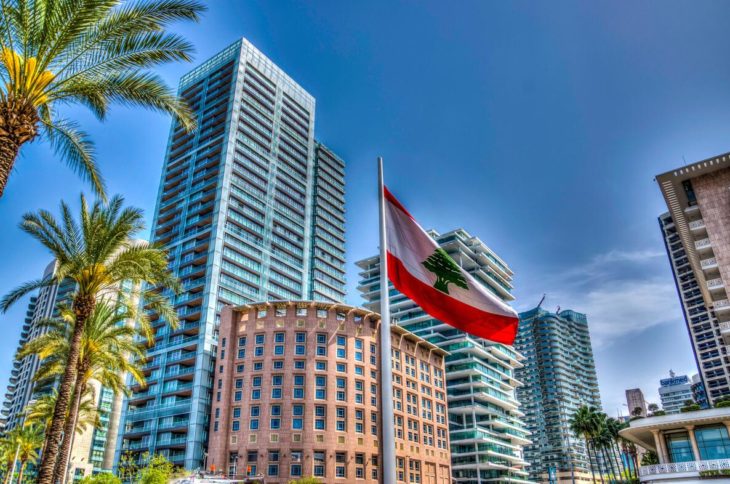 Lebanon is an important center for banking and finance in the Middle East, which is characterized by the architecture of parts of the capital Beirut.

Lebanon has limited natural resources, and in the modern economy – especially developed since the 1960s – banking and finance have played a significant role. Traditionally, from ancient times, international trade has been an important trade route.

In modern times, Lebanon and Beirut have been a regional commercial center. With an open economy and liberal governance, as well as low taxes and fees, the country attracted foreign investment. The financial sector and other industries suffered during the civil war, when capital and businesses were withdrawn from Lebanon and the national currency, the Lebanese lira, was dramatically devalued. Militia groups took control of various parts of the country, including the ports. An extensive illegal economy, including drug and arms smuggling, flourished.

For many years, the infrastructure was wreaking havoc, and an extensive recovery program was launched after 1990. This has contributed to debt and budget deficits, and at the same time has given rise to a speculative housing market that has pushed lower income groups out of the big cities, especially Beirut. Israel’s 2006 attack on Hezbollah led to further devastation. The proliferation of anti-personnel mines has resulted in agricultural areas being taken out of service or run at risk to farmers’ lives.

Parts of Lebanon’s economy are closely linked to Syria, and the civil war there from 2011 has had economic consequences for Lebanon as well.