About half the population of Malaysia is Muslim Malays, while the country’s Chinese are the largest minority group. Over the years, the contradictions have periodically been strong between the Malay majority and especially the Chinese and Indians.

About four-fifths of the population lives in the more urbanized West Malaysia, especially on the west coast. East Malaysia’s residents are fairly evenly distributed between the two states of Sarawak and Sabah. 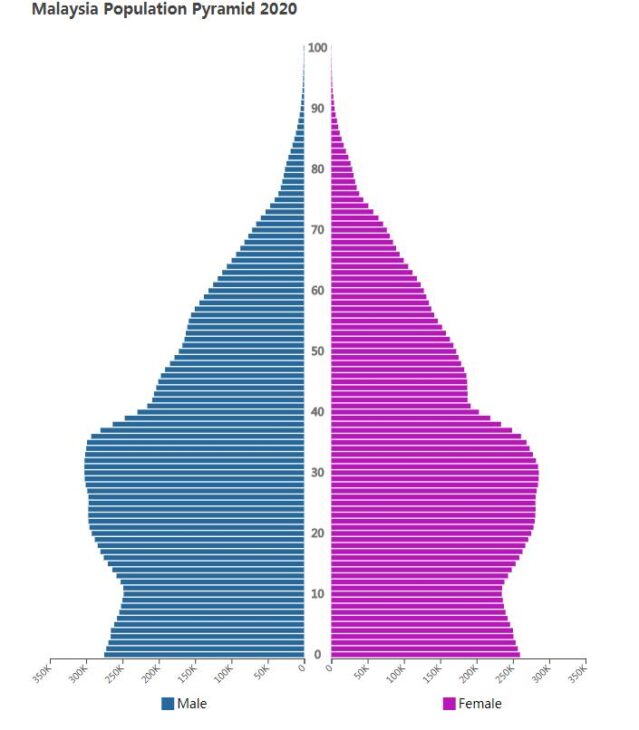 The Malacca peninsula is historically the core country for the people known as Malays. Malay-speaking groups are believed to have immigrated in the 500s BC from the mainland of South China. Malaysia’s constitution establishes three characteristics of a Malay: they must have Malay as their mother tongue, adhere to the Malay custom (adat) and be Muslim. By that definition, about half of Malaysia’s residents are Malays.

Since around 1970, the term bumiputra (the sons of the earth in Malay) has been officially used to refer to the people who existed in the country before the colonial era. In addition to the Malays, the Dajak (see below) in East Malaysia is considered bumiputra, as well as the urinary residents of the Malacca peninsula, the small folk pellet orange asli. The concept of bumiputra makes the Malays appear both indigenous and majority people, making it easier for them to assert themselves against the influential Chinese and Indian minorities. In order to equalize the difference between the Malays and the economically more successful Chinese and the Indians, in 1970 Malaysia began to apply positive treatment programs for bumiputra (in practice mainly the Malays) (see also Modern history and Economic overview).

The Dajaks are Borneo’s native residents. They comprise about 50 people groups with their own languages. Most famous are the sweat-eating iban, formerly notorious head hunters, who make up a third of the residents of Sarawak. Also, those of Borneo’s residents who call themselves Malays are usually Dajaks who in modern times have adopted Islam and have been incorporated into the Malay culture. However, the dajaks who have transitioned to Christianity are more. In total, the indigenous peoples make up about 12 percent of the population.

Malaysia’s second largest population group is the Chinese, which are found in both Western and Eastern Malaysia. In the Penang state on the west side of the Malacca peninsula, they are in the majority. The Chinese share of the population fell from 37 percent in the 1950s to about 20 percent in 2019, as Malaysia’s Chinese have a lower birth rate than the Malays. The Chinese are most often urban dwellers and since independence in 1957 have been a leader in business. The Indians are another significant minority that make up about 6 percent of the population. Many of the Indians are Tamils ​​from South India, but this ethnic group includes all originating in today’s India, Pakistan and Bangladesh.

The ancestors of the Chinese and Indians came mainly to Malaysia during colonial times. Recent immigrants come mainly from Indonesia but also from the Philippines, Nepal, Pakistan and Bangladesh. Most work on plantations or at construction.

In February 2018, there were 1.8 million registered guest workers in Malaysia, of which 40 percent came from Indonesia, 22 percent from Nepal and 15 percent from Bangladesh. Estimates of the number of paperless migrant workers vary between 3 million and 4 million.

According to the UNHCR, there were around 120,000 refugees, more than 40,000 asylum seekers and around 10,000 stateless people registered in Malaysia by the end of 2018. The majority of these were Muslim Rohingy from Myanmar (see Myanmar, Rohingy Situation). Altogether, a quarter of a million million “persons of concern” were in the country, according to UNHCR.

Malaysia has not ratified the UN Refugee Convention and therefore lacks the laws and administrative structures to deal with the refugees coming to the country. Refugees are not allowed to work in Malaysia and their children are not allowed to attend public schools. According to the UNHRC, therefore, women and children in particular are at risk of being exploited. Like paperless, they also run the risk of being arrested and detained or deported. UNHCR and other organizations support the refugees with health care, education and more.

According to official estimates, around a million Malaysians, mostly Chinese and Indians, live abroad, mainly in Singapore, the United States and Australia. Many of them are highly educated.

In ancient times a simplified form of Malay was used as a trading language in Southeast Asia. Classical Malay was developed in the 15th century Malacca Sultanate (see Older history). When present-day West Malaysia became independent in 1957, a standard variant of Malay – Bahasa Malaysia – was adopted as the national language.

English is a compulsory second language in schools, is widely used in major cities and is the accepted business language.

Malay (Bahasa Malaysia) is the official language, Chinese is the largest minority language.