The Maldives are of mixed origin and are mainly descended from South Indians, Sinhalese and Arabs. The official language is divehi (maldivian). English is commonplace in the capital Malé and in the tourist areas.

The population is young, but the previously rapid population growth has slowed. At the same time, the proportion of migrant workers has grown sharply and now accounts for at least one third of the population (see Labor Market). 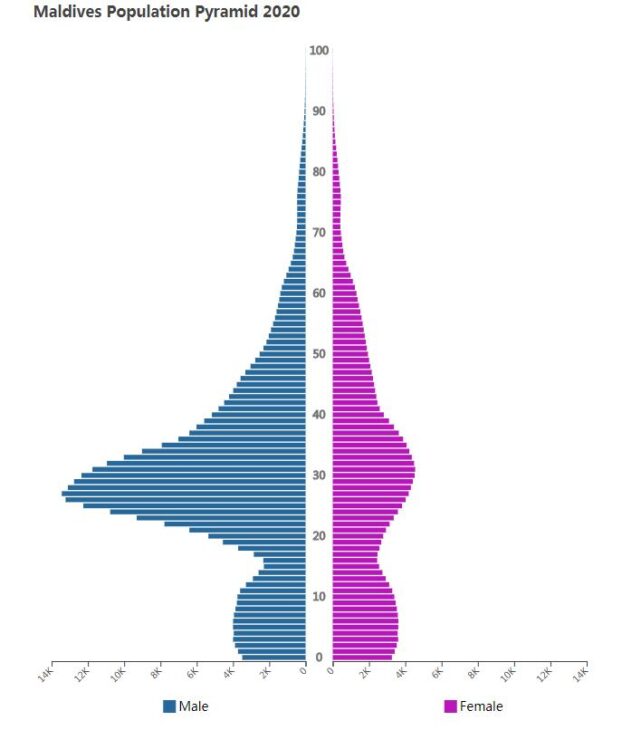 More than a third of the residents live in the only Maldives city, Malé. Here the high-rise buildings are crowded and the density of people is high. It is also crowded on the other inhabited islands, although on average they only have a thousand residents.

The official language of divehi is closely related to Sinhalese, spoken by the majority people in Sri Lanka. Divehi is also heavily influenced by other languages, not least Arabic. It has its own writing language, which is written from right to left.

the Maldives are of mixed origin (derived mainly from South Indians, Sinhalese and Arabs)

divehi (Maldivian) is official language, English is commonplace in the capital and in tourist areas

Yamin forms a government made up of members from his own party PPM, the Republican Party (RP), the Maldives Development Alliance (MDA) and the Justice Party (JP).

Yamin wins in the second round of the presidential election

When the second round of the presidential election is finally held, Abdullah Yamin of PPM wins over Muhammad Nashid of MDP with 51.4 percent of the vote against 48.6 percent. Yamin is installed as president the following day. Nashid acknowledges being defeated and promises to “respect the will of the people”.

President Muhammad Nashid wins the first round of the presidential election by a wide margin. He gets close to 47 percent of the vote against almost 30 percent for Abdullah Yamin and just over 23 percent for Qasim Ibrahim. The turnout is just over 87 percent. But the second and decisive election round a day later is canceled when Yamin appeals to the Supreme Court and demands more time to prepare his campaign.

Presidential elections will be held in November

The Election Commission announces that presidential elections will be held on November 9. This time the voting lengths are approved by all three candidates.

The police stop the presidential election

The planned new election on October 19 is halted, this time by the police. The reason is that presidential candidates Abdullah Yamin and Qasim Ibrahim have not approved the ballots. The Election Commission says the police have violated their powers. The candidates had previously applied to a court to postpone the election, but the court did not make a decision. When the decision was delayed, the police intervened and stopped the election.

The presidential election is annulled

The Supreme Court annuls the outcome of the first round of presidential elections because of suspected election fraud. According to the court, there are both deceased and found persons in the voting lists. New elections were announced until October 19. When the decision is made public, riots in Malé erupt, including masked perpetrators lighting fires on materials and premises belonging to the Raajje TV TV station, which openly gives its support to President Nashid. A few days later, President Wahid Hassan announces that he will withdraw his candidacy.

The second round of the presidential election is postponed

The Election Commission announces a second round of presidential elections until September 28, but the Supreme Court is tearing up the decision just days before the election is to be held. The reason is that Qasim Ibrahim, who came third in the first round, has appealed to the court with the requirement that the result of the first round should be rejected because of electoral fraud. In order to investigate the allegations, the Supreme Court decides to postpone Election Day until further notice. Nashid’s supporters within the MDP object to the decision being made in violation of the Constitution, which stipulates that the second round of elections must be held no later than three weeks after the first.

Nashid wins the first round of the presidential election

President Nashid is allowed to stand in the presidential election even though a trial is ongoing against him (see August 2012). He clearly gets the most votes, just over 45 percent. Abdullah Yamin, a half-brother of former dictator Gayum, is a candidate for PPM and receives just over 25 percent of the vote. The incumbent president Wahid Hassan wins only 5 percent. Domestic and international election observers consider the first round of elections to be free and fair. A second and decisive round of elections will be held between Nashid and Yamin.

Nashid is being detained

President Nashid is arrested by police and detained awaiting trial in connection with a trial, where he is charged with illegally dismissing a high ranking judge (see January 2102).

Former President Nashid for the second time refuses to appear in a court hearing in connection with a trial against him (see August 2012). When the court orders him to be arrested, Nashid takes refuge in the Embassy of India in Malé, where he stays for ten days.