The population of Mongolia is fairly uniform. Nearly 90 percent of the residents are Mongols (Chalcha Mongols). The rest of the population can be divided into two groups: other Mongolian-speaking peoples (such as dead-woods, burjats, bajad and dariganga) as well as Turkish-speaking peoples, such as Kazakhs and Tuvinians. The latter live in the western part of the country.

More Mongols live in China than in Mongolia, mainly in the province of Inner Mongolia. In Russia, too, there are minorities that are closely related to the Mongols. Many Kazakhs emigrated to Kazakhstan during the 1990s. Even a lot of Russians have left Mongolia since the 1990s while many Chinese have moved there. 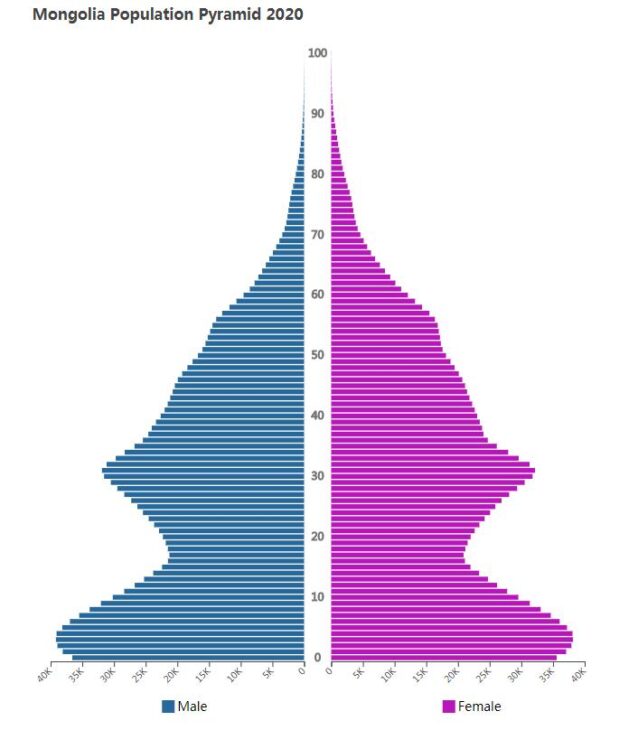 Mongolia is one of the world’s sparsely populated states. The residents have since ancient times been a livestock nomad people, divided into clans and clan associations. Some of the rural population still live a nomadic or semi-nomadic life, but this traditional way of life is in decline. There has been a significant move in to the cities and rural residents have been encouraged to become residents. Nearly one third of the country’s residents live in the capital Ulan Bator.

Mongolian is an Altaic language that is in a long way related to the Tongan and Turkish languages. The Eastern Mongolian dialect khalkha dominates strongly, but other Mongolian dialects are also spoken. In the province of Bajan Island in the west, Kazakh is the largest language, but most Kazakhs also speak Mongolian.

Mongolian is traditionally written with its own alphabet, the Uyghur, but this was replaced in the 1940s with the Cyrillic after Soviet model. Since 1990, the own alphabet is used again in official contexts, while the Cyrillic is used everyday. Shared sentences prevail on how Mongolian words should be transcribed (transmitted) to the Latin alphabet, and different variants of the same name occur.

Mongolian (Chalcha is the largest dialect), Kazakh, Russian, Chinese and other minority languages

Grand victory for the opposition

The opposition party MPP wins a landslide victory in the parliamentary elections. MPP occupies 65 of the 76 seats in the country’s parliament and is expected to form government within two weeks. Despite the reduction of the quota for female members, more women are allowed seats in the new parliament than the old one, 13 against 11.

The proportional elections are replaced by majority voting, which makes it more difficult for small parties to enter Parliament. Critics of the law believe the change is a plot for the country’s two major parties to continue to dominate. A few days earlier, the quota for female parliamentarians has been reduced from 3o to 20%.

The International Red Cross Federation warns that a slow-acting natural disaster is depriving many Mongolian families of their livelihoods. The phenomenon known as zud means that an extremely hot summer with drought is followed by an unusually cold winter. Because the drought means that the animals do not get enough food so that they can build up their reserves, they will not be able to survive the following winter. According to the Red Cross, 350,000 animals have already died and the organization fears that a total of one million animals will die. The families that lose their livelihood will not find any other jobs in the countryside. The Red Cross Federation predicts that they will be forced to move to tent cities on the outskirts of the capital where poverty, crime and drugs await.

Prime Minister Tjimedijn Sajchanbileg survives a vote of no confidence in Parliament with the numbers 42 against 31. The background to the vote is dissatisfaction among MPs with a deal concluded by the government with the foreign owners of the large copper mine Ojuu Tolgoj in the Gobi desert. The settlement is about how the mine will be financed and developed.