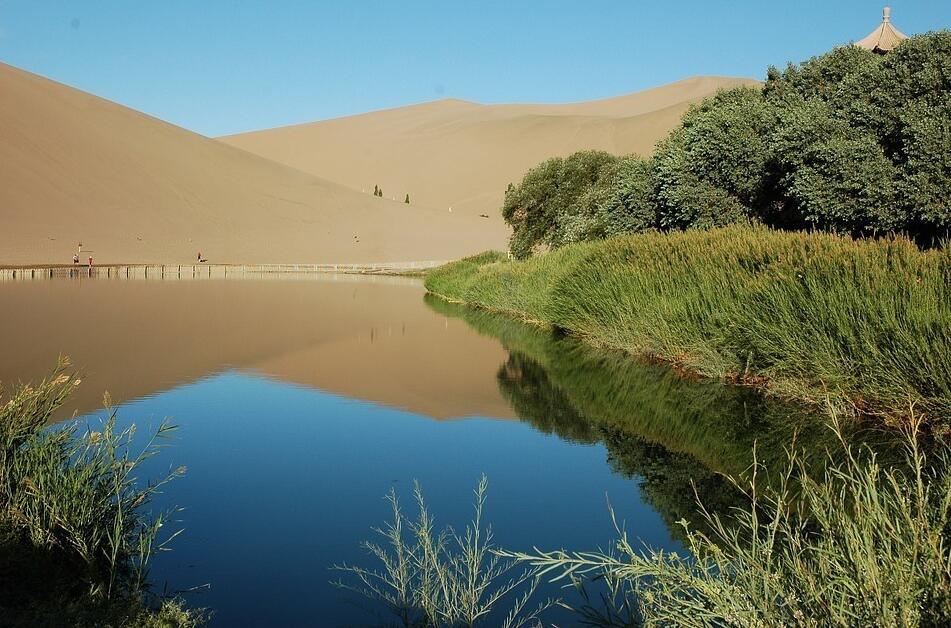 The eastern part of the country includes large lowland areas intersected by Chang Jiang, Huang He and other major rivers.

The Manjury Plain or the Northeast Plain, Chinese Dongbei Pingyuan, is the largest lowland area in China. It covers an area of ​​approx. 350,000 km2 in northeastern China, it consists of a flat plain, drained in the north by Amur’s bee Songhua Jiang (Sungari), and to the south by Liao He, which flows into Bo Haibu Bay.

Changbai Shan forms an elongated mountain range along the border with North Korea, southeast of the Manjury plain. The mountains are generally 1000–1500 m high; The highest point is the volcanic cone Baitoushan (2744 masl). Changbai Shan is one of the most important forest areas in China, and only the valley bottoms are cultivated.

The North China Plain, Chinese Huabei Pingyuan, is the country’s second largest lowland area (about 300,000 km 2 ), and lies between the Yellow Sea and the loose plateau in the northwest. The plain is made up of huge deposits that Huang He and Huai He have brought from the plateaus of northern and northwestern China, with thicknesses of up to 1000 m. The river runs are often higher than the surrounding land due to. high dikes, while on the plain itself there are numerous smaller recesses that collect summer precipitation and form small, shallow lakes. These lakes normally dry out during the fall and winter. The North China Plain is very densely populated and cultivated, with the highest proportion of arable land in all of China.

The Loose Plateau west and northwest of the North China Plain forms a distinctive and homogeneous morphological region, comprising most of the provinces of Gansu, Shaanxi and Shanxi and the autonomous region of Ningxia Hui. Most of the area consists of a heavily cut plateau at an altitude of 600–1000 meters, covered by a thick layer of wind-deposited sediments, loose. The sediment thickness is normally between 15 and 150 m, but can reach 250 m in some places. The rivers, including Huang He and Wei He, have cut deep into the discharge deposits, forming deep canyons with steep sides. Mountain chains rise above the loose plateau in several places; the highest is Liupan Shan (2942 masl) inNingxia Hui. 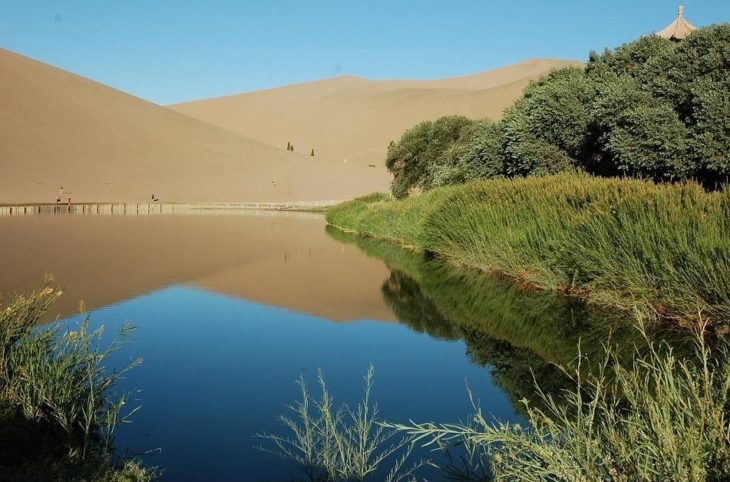 The Loose Plateau west and northwest of the North China Plain forms a distinctive and homogeneous morphological region, comprising most of the provinces of Gansu, Shaanxi and Shanxi and Ningxia Hui.

The Mongolian high plain, Chinese No Mongol Gaoyuan, encompasses most of Inner Mongolia, and extends from the Dsungaria and Tarima basins to the west towards the up to 2000 m high mountain ranges Da Hinggan Ling, ‘Great Khingan’, to the east. These form a boundary against the lowland of the Jurassic. Høysletta is mostly 1000-1500 meters above sea level, but some mountain ranges rise to over 2000 meters above sea level. At its highest is Yin Shan (2364 masl) near the border with Mongolia.

Shandong Peninsula, Chinese Shandong Bandao, rises steeply from the North China Plain, forming a huge foreland that separates Bo Hai Bay from the Yellow Sea. The Shandong Peninsula was formerly an island, and still protrudes as one from the surrounding lowlands. The mountains are made up of a complex of ancient rocks, and the area is divided in two by an approx. 100 km long recess, a wide moat called Laizhou – Jiaozhou corridor. The eastern part, the Shandong Heights, is made up of magmatic and metamorphic rocks, with altitudes of 500–800 m. The highest is Lao Shan (1130 masl). The western part, Tai Shan, consists partly of granites and partly of ancient sedimentary rocks such as limestonewith smaller deposits of coal. Tai Shan’s “Holy Mountains” reach an altitude of 1524 meters, but usually the altitudes are below 1000 meters. The peninsula ends in numerous steep cliffs, and in several places an archipelago is formed.

Qin Ling in Shaanxi is the largest mountain range east of the Tibetan Highlands, dividing northern and central China. The mountains consist of a series of parallel chains, running from Gansu in the west to Henan in the east, with altitudes of between 1000 and 3000 meters. The highest point is Taibai Shan (3767 masl).

The red basin or Sichuan basin, the Chinese Sichuan Pendi, is named after the red sandstone that is the most conspicuous geological element in the area. The red basin is a recess with an area of ​​approx. 175 000 km2, surrounded by mountains. The altitude is generally 900-1000 meters above sea level, with a slope from north to south. With the exception of the Chengdusletta, the Red Basin is heavily hilly with steep hills and intermediate valleys. The region is drained by Chang Jiang, which breaks through the pelvis via a powerful gell, and its bees Min Jiang, Tou Jiang and Jialing Jiang. Thanks to the surrounding mountains, the Red Basin has a mild winter climate with higher temperatures than the plain of southeastern China.

The southeast coast, which includes the provinces of Fujian and Zhejiang, forms a mountainous and hilly region made up of ancient, stable rocks. The highlands are heavily eroded, and apart from Wuyi Shan and Daiyun Shan, the altitudes are usually between 300 and 900 meters above sea level. The region’s highest point is Huanggang Shan (2158 masl) in Wuyi Shan. The mountain ranges run parallel to the coast in the southwest-northeast direction. Apart from small lowland areas at the lower rivers, real plain lands are rare. The rivers, Min Jiang, Han Jiang and others, are all short, but due to the altitude, high currents. Off the coast are numerous islands, including Zhoushan Dao.

Middle Chang Valley encompasses the areas east of Yichang in Hubei, where Chang Jiang breaks through the mountains around the Red Basin to the delta area near Nanjing. The plain consists of three smaller pools with many common features: the upper pool, the middle pool and the lower pool.

The upper pool is a large lowland to the majority below 200 m, which covers central Hubei and northern Hunan. The pool is covered by Lake Dongting Hu and numerous smaller lakes, which are interconnected by the meandering Chang Jiang and its bees. Dongting Hu expands strongly during flood periods, with a width of up to 150 km.

The central pool is divided by Chang Jiang into a northern and a southern section. The southern forms an extensive alluvial lowland around Lake Poyang Hu, whose area is steadily decreasing in size. To the north, the plain is more limited in size and extends northeast to the city of Anqing, where Chang Jiang flows through a narrowing (“Hen Point”). The lower pool is the smallest, extending from Anqing and almost to Nanjing. Most of the plain lies north of Chang Jiang, and there are also remnants of a larger lake.

The Lower Chang Valley includes Chang Jiang’s delta and the lower part of Huai He’s Pool, which, with its many lakes, naturally joins the delta area. In its lower course, Chang Jiang is a wide, slow-flowing river with many arches, islands and sandbars. To the south lies the large lake Tai Hu, to the north including Hongze Hu formed by Huai He, which has its mouth closed by dredging. The entire plain is intersected by numerous rivers and canals.

Nan Ling or the South China Highlands, consists of a series of mountain ranges that form the watershed between Chang Jiang in the north and Zhu Jiang in the south, and the divide between central and southern China. The mountains extend from the eastern boundary of the Yunnan Plateau to the high ridges of Fujian and Zhejiang, with direction from southwest to northeast. The highlands are mostly around 1000 meters above sea level; the highest mountain is Miao’er Shan (2142 masl) in the Yuecheng Ling mountain range.

The Zhu Jiang system forms China’s southernmost region. Zhu Jiang, the ‘Pearl River’, is a river system consisting of the three rivers Xi Jiang, ‘West River’, Bei Jiang, ‘North River’ and Dong Jiang, ‘East River’, which run from west, north and east, and meet in a large delta area at Guangzhou. Xi Jiang drains the Guanxi basin to the west and is the largest of the rivers. The landscape is characterized by wide areas with hills and low mountains, which rarely reach over 1000 meters above sea level, and with narrow river plains along the rivers. The western part is a plateau geologically composed of sandstone and limestone. Erosion in the limestone, especially in the vicinity of the city of Guilin, has created a stunning tropical karst landscape with scrub-covered, up to 200 m high limestone cones (tower karst) pierced by caves and cracks. Except in the Zhu Jiang Delta, and on the Leizhou Peninsula, the ridge landscape usually reaches all the way to the coast.

In the South China Sea lies the large island of Hainan with a wavy hillside surrounding an 1850 m high granite massif.