Oman’s citizens are mainly Arabs who are divided into different clans. About five percent of them still live as nomads. The mountain population of Dhofar in the southwest resembles the appearance and way of life of the residents of the Horn of Africa. For centuries, coastal cities, including Persians, Baluchs (originating in Iran and Pakistan), and East Africans have lived.

Since oil began to be mined in the 1970s, many migrant workers have immigrated mainly from South Asia. Half of the residents were foreigners in 2014 without citizenship. In 2013, the government announced that it wanted to limit the proportion of labor migrants to 33 percent of the population in total. 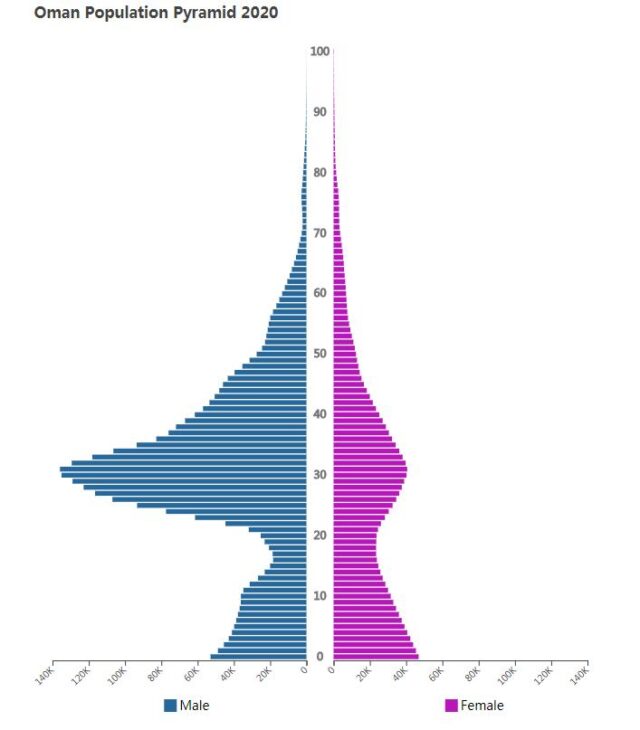 The population is young, only about three percent are older than 65 years. More than half live in or around the capital Musqat.

High Arabic is an official language, but most speak New Arabic dialects. In business and government, English is generally used. The mountain people shihuh on the Musandam Peninsula speak a variety of Persian and in Dhofar, in addition to Arabic, also speak Semitic languages ​​such as mahri, bathari, harsusi and jibbali.

Oman opposes plans for the six members of the Gulf Cooperation Council (GCC) to form a union.

The Ministry of Information is calling on the prosecutor to prosecute two journalists who have published an article on homosexuality in Oman in a privately owned English-language free newspaper in the country. The article is considered to have undermined religious and moral values. Oman’s journalist association also distances itself from the article and urges the authorities to withdraw the newspaper’s publication certificate.

Oman is investing in railway construction

Oman’s Minister of Transport announces that the country will receive a railway. It will be 224 km long and will be linked to the rail networks in neighboring countries. Construction will begin in 2015.

The government confirms information that the overthrown Libyan dictator Gaddafi’s widow, daughter and two sons have been granted asylum in Oman. It should not be seen as a political position but as a humanitarian gesture, it is called. The current family members fled in connection with the 2011 uprising from Libya to Algeria, but were not allowed to stay there. They should have come to Oman in October 2012.

Sultan Qabus pardons over 50 network activists who have been imprisoned for slander.