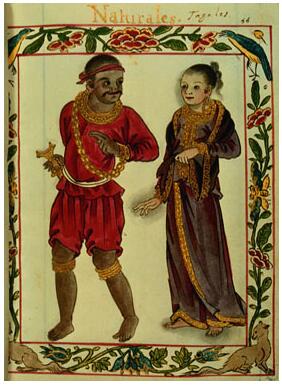 In prehistoric times, the Negritos (Aetas) were the first residents of the archipelago, followed by Austronesian immigrants who brought various influences from the Malay, Hindu and Islamic cultures to the islands. From this diversity, however, no common “high culture” comparable to the neighboring regions – such as in today’s Indonesia and Cambodia – emerged.

Meanwhile in medieval Europe, the most influential forces included emperors of various stripes and the powerful Roman Catholic Church. At times it was difficult to distinguish secular wealth from religious goods there. Especially in those times when the Popes residing in the Vatican had the last word on all matters of earthly life. The courts of the reigning kings as well as those of the Catholic Church were dominated by the unbridled pursuit of the earth’s riches and accumulation. It was the nascent capitalist mode of production that led Western European traders in particular to invest capital in profitable expeditions abroad.

Colonial run on spices and other spices

They founded colonies in numerous corners of the world and it was no wonder that they were founded on May 4th 1493 by Pope Alexander VI. published bull regulative intervening and divided the earth between the then undisputed sea powers Spain and Portugal accordingly into two hemispheres. This document decreed that all “pagan” land in the east should belong to Portugal, while the western half should belong to Spain. According to this decree, Spain laid claim to the Philippines on the pretext that the islands belonged to the western half, although Portugal could have claimed this for itself.

First and foremost, it was the run on spices and a true spice mania, which prompted the Spanish and Portuguese but also rich merchant guilds in other parts of Europe to pool capital to finance and equip ship expeditions in order to secure access to these coveted goods. The beginnings of western colonialism on the islands, which were later baptized “Philippines”, were literally “peppered”. The search for spices also convinced the ruling elite in Spain, who finally signed a team of seafarers with financial support from the Augsburg-based Fugger family. This was supposed to set sail under the guidance of a Portuguese captain and navigator in order to find the legendary spices. The deeds of this man, his Spanish name Ferdinand Magellan was described by Stefan Zweig in his novel “Magellan – The Man and His Action”, first published in 1938.

The Spanish conquistadors, who were the first Europeans to come to the country from 1521 and later named it after their heir to the throne, Philip II, did not encounter any uniformly organized resistance. The island’s character – its fragmentation and relatively sparse settlement – enabled the Spaniards to gradually consolidate and expand their influence over most of the islands. The social and political units they found were communities consisting essentially of 30 to 100 family groups – so-called barangay – which literally means boatload and was reminiscent of the outrigger boats with which settlers from what is now Malaysia and Indonesia had landed.

Conversion of the “pagan moros”

According to aristmarketing, Philip II’s intention was not only to control the Philippines in order to establish a permanent base for lucrative trade with China. Religious reasons were just as important in the regent’s deliberations. He wanted to enforce the conversion of “the Gentiles” to the Catholic faith. When asked whether it would not be better to give up the Philippines in favor of the more resource-rich Brazil, Philip II is said to have replied: “It is not only the task of kings to look for precious metals and precious stones!”

The Spanish colonial rulers, who had chosen Manila as the main seat of their reign over the islands in 1571, were not able to completely push back Islam, which had gained influence from south to north up to today’s Manila. Especially in Mindanao and in the Sulu Sea further south, the influence of Islam remained dominant until around 1900. There, with the sultanates of Jolo and Maguindanao, strictly hierarchical societies had emerged, which engaged in lively trade with the neighboring regions and were equipped with weapons in such a way that they could defy the military pressure of the Spaniards. This scolded the Muslims in the south of the archipelago contemptuously Moros (Moors, Moors) – based on the time of Conquista.