The Philippines is one of the most densely populated countries in Southeast Asia. Birth rates have been steadily declining since the 1960s, while death rates have dropped. Just under one third of the population is under 15 years of age. The population is concentrated on the coasts and the Luzon plains. More than one in ten (according to the 2015 census) residents live in and around the capital Manila.

Despite a large shortage of housing, people continue to move from the countryside to the larger cities in search of work and a better life. About three million people, including those who have jobs, live in slums on the outskirts of cities. 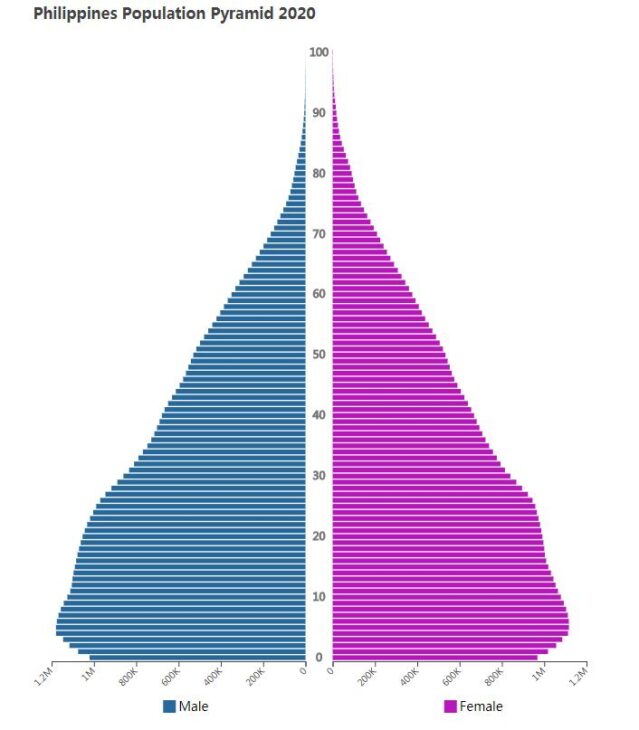 People from the north are also relocating to less populated regions, especially Mindanao, which has caused contradictions with the population there (see Muslim separatists). The conflict has a religious dimension as many of the immigrants are Christians and there is a large Muslim population in Mindanao (see below).

The majority of the population, commonly called Filipinos, are mainly of Malay origin. Immigrants from the colonial powers Spain and the United States as well as from China have also left traces in the population. Mixed marriages are common and the boundaries between the groups are often fluid. The different groups, for example ilocano, pangasinense, kapampangan, tagalog and others, differ mainly in that they speak different languages. Many Filipinos consider themselves to belong to more than one people group.

The Muslims, Moros, also have Malay roots and live mainly on western Mindanao and the surrounding islands. It is unclear what proportion of the population is Muslim, some sources state 5 percent, while others say 11 percent. Many Muslims believe that they are discriminated against because of their faith.

The conflict in the south between Muslim separatists and the government army has created large streams of refugees. Several thousands of people have been forced to flee both once and several times as violence erupts. Also, fighting between the army and the left guerrilla NPA (see Left Uprising) has forced thousands of people to flee. At the end of 2018 said the number of IDPs at just over 300 000. A large number of people are forced every year to leave their homes as a result of severe storms, floods or volcanic eruptions (read more about that here).

There are several minority groups, including negritos, which are counted as the islands’ indigenous population. The minority people are often trapped in fighting between rebel groups and the army. Their lifestyles are also threatened by mining projects in their traditional homes. The Chinese minority make up about one percent of the population and are fairly well integrated into the community. There are also smaller groups of American, Japanese, Spanish and Indian origin.

Over a hundred languages ​​and dialects are spoken in the Philippines. The largest languages ​​are Filipino or Pilipino, based mainly on Tagalog and some other local languages, and are the mother tongue of about 40 percent of the population. Significantly more have Filipino as a second language and many speak English as well. Other major languages ​​are cebuano, ilocano, hiligaynon and bicolano.

most of the population is mainly of Malay origin, Chinese minority, various small tribal people and others

Filipino (or Tagalog) is the biggest language. Other major languages ​​are cebuano, ilocano, hiligaynon and bicolano. Many speak English as well

President Aquino signs a law passed by Congress in October that could provide life imprisonment for public officials who are responsible for the illegal removal of people. According to a Philippine human rights group, more than a thousand people have been removed on state orders since the fall of the Marcos dictatorship in 1986. Twelve such cases must have been registered under Aquino’s rule, against over 200 under its predecessor Gloria Arroyo.

Congress is voting to allow state-subsidized contraceptives to be distributed to poor couples, and to allow sex education in schools. The Catholic Church opposes this, which has made it more than ten years since the first draft law amendment was tabled. Catholic bishops say they should oppose the congressmen who approved the law in the parliamentary elections in May 2013. The law is signed by President Aquino at the end of the month.

Over a thousand people perish when a typhoon sweeps across the island of Mindanao to the south. More than 300,000 lose their homes. Both the government and the left-wing NPA are announcing an informal ceasefire in two disaster-stricken provinces. Later, the government unilaterally announces an armistice with the NPA over the Christmas holidays, from December 16 to January 2.

Arroyo is remanded and is facing trial for allegedly stripping millions of dollars from a state charity fund.

High-ranking politicians jump off to the Liberal Party

At the beginning of August, five governors and other members of the political elite in the ARMM autonomous region of Mindanao joined the party of President Aquino, the Liberal Party. Most of them were former Arroyo’s camps. It is also reported that leading political families have agreed to cooperate, which means they will not compete with each other for power in the May 2013 elections.

At least 60 people are killed when the capital of Manila is flooded after heavy rain. Over 300,000 Filipinos are left without a roof as they move their homes into low-lying areas.

Another witness in the Maguindanao case is murdered

A court announces that a possible witness in the trial of the Maguindanao massacre (see November 2009) has been murdered. It is the sixth person connected to the case who has been murdered since 2010.

Opinion polls in the spring indicate that President Aquino has strong support among voters.

HD judges are set aside

On May 29, the Senate decides to dismiss Supreme Court Chief Justice Renato Corona (see December 2011) for failing to report all of his financial assets. 20 out of 23 senators vote for a convict. However, the Senate cannot agree on a ruling on whether Corona acted to favor former President Arroyo. The verdict allows President Aquino to appoint a new chief judge.

Dispute with China damages the economy

Several hundred Filipinos demonstrate outside China’s embassy in Manila and demand that China withdraw its vessels from the disputed area. Ahead of the demonstration, the Chinese government is urging Chinese in the Philippine capital to stay indoors. The conflict has economic repercussions as several Chinese travel companies cancel their trips to China. China also refuses to release boats loaded with bananas and pineapples from the Philippines, citing that they contain harmful bacteria.

The conflict over the Sprat Islands leads to tensions with China. A Philippine naval vessel is trying to intervene on Chinese fishing vessels which they claim do not have the right to fish in the area of ​​Scarborough Shoal in the South China Sea. Later in the same month, the Philippines and the United States carry out a military exercise near the disputed islands.

Prosecution of Arroyo with husband

Arroyo and her husband are being prosecuted for corruption in connection with the procurement of a government contract that went to a Chinese telecom company.