Most of the citizens of Saudi Arabia are considered Arabs, although especially in the coastal areas there is a large involvement of people from other sides of the seas, mainly Africans and Persians. Around one third of the residents are estimated to be foreign migrant workers. The figures are uncertain as many are paperless.

Up to the 1950s, about half of the Saudis were nomads or half-nomads, so-called Bedouins. Nowadays, almost everyone has abandoned the traditional nomadic life and is a resident. Some still count themselves as Bedouins and as a kind of indigenous people from the interior of the Arabian Peninsula. 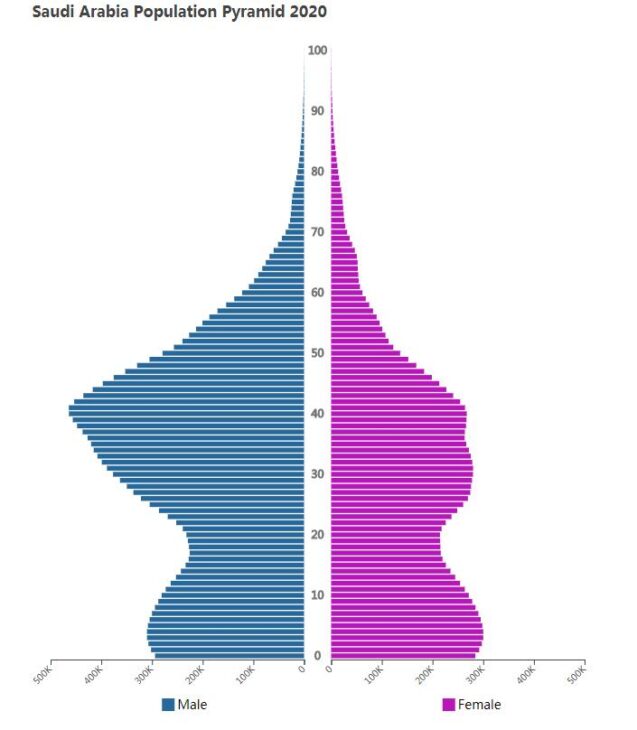 Population growth is high in Saudi Arabia and has increased five-fold in just over 40 years. The population is very young; less than a third are over 30.

The millions of foreigners come largely from India, Pakistan, Bangladesh, Indonesia and the Philippines and other southern and eastern Asian countries. Many also come from Africa, not least Ethiopia, as well as Yemen and other Arab countries in the region. A smaller proportion of Western specialists also work in Saudi Arabia. It is difficult to get Saudi citizenship, for example only Muslims can be involved.

The conditions for guest workers are often difficult and the rules for migrant workers were tightened in 2013. In connection with the change in the rule, one million migrants left the country voluntarily for six months and then a quarter of a million were deported for three months (see also Labor Market).

Arabic is the official language and mother tongue of just about every citizen. Many government officials are fluent in English that is commonplace in diplomacy, business and the oil industry.

Arabic is a Semitic language, a subgroup of the Afro-Asian language family. It is one of the world’s largest languages ​​and is spread by Islam from the Arabian Peninsula to much of the Middle East and North Africa. Therefore, there are many loan words from Arabic in languages ​​such as Farsi and Urdu. There are also many Arabic loan words in Spanish.

The Arabic script is very uniform, but the transfer to the Latin alphabet varies, therefore different spellings of the same word often occur. This also applies to local and personal names. State founder Abd al-Aziz can also be written for example Abdel Aziz or Abdulaziz. Family relationships are primarily expressed through patronymic icons: a man’s first name is followed by the name of bin + father, where “bin” and “ibn” are variants which both mean “son of”; bin Ahmad means Ahmadsson. Maryam bint Ahmad also means Maryam Ahmadsdotter.

Saudi citizens are Arabs, around one third of the population are migrant workers from Asia, the Middle East and North Africa

New generation in the top tier

King Abdullah appoints Prince Mohammad bin Nayef as new Minister of the Interior, replacing his uncle Prince Ahmad, who held the post for almost five months (see June 2012). This is the first time someone from a younger generation has been introduced to the inner circle of governing. Mohammed has long been responsible for Saudi Arabia’s counter-terrorism and was slightly injured in a suicide attack (see August 2009).

The Morality Police gets female members

Women have previously not been allowed in the union, but now women will be recruited. Shortly before, the head of the morality police announced that the authority of the union should be limited. The decision comes after increased public dissatisfaction and several criticized incidents during the year.

Two Saudis and six Yemenis are arrested when police strike two suspected cells linked to al-Qaeda in Riyadh and Jeddah.

A soldier and a demonstrator are shot dead in clashes between protesters and security forces during a Shiite protest in eastern Saudi Arabia.

Saudi women in the London Olympics

This is the first time women have represented Saudi Arabia in the Olympic Games.

Two people are shot dead by police when Shia Muslims protest against the arrest of a regime-critical religious leader. Later in the month, several people are arrested in continued protests.

Assistance is promised to Yemen

Saudi Arabia is hosting a donor conference to neighboring Yemen where $ 4 billion is promised (see Yemen). Most of the aid – $ 3.25 billion – is promised from Saudi Arabia for infrastructure and security.

Unrest at border with Yemen

Several people are injured in conflicts between Saudi border guards and Yemeni militia inside northern Yemen.