South Koreans give birth to fewer children and the country has one of the lowest birth rates in the world. Several measures have been taken by the government to try to encourage South Koreans to have more children. One of the reasons why so few children are born is that young South Koreans choose a professional career rather than getting married and forming a family. On average, women give birth to only one child. From the 1950s to the end of the 2010s, the birth rate has decreased from 5.6 to 1.1 children per woman. According to forecasts, the population will start to decline after the middle of the 2020s. If the development continues, it will amount to only 39 million in 2067. Then the median age in the country will also have increased to 62 years, which is a consequence of the residents living longer. 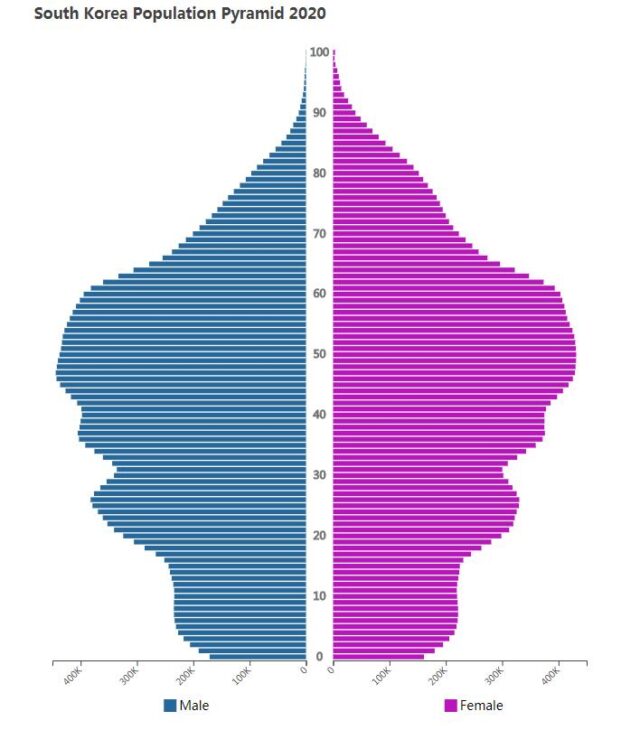 The population consists almost exclusively of Koreans, but there is a small Chinese minority.

The origin of the Korean language is debated, but is usually attributed to the Altaic language family. However, two-thirds of the vocabulary are Chinese loanwords. For a long time, Korean was written only with Chinese characters. In the 15th century a simple phonetic writing language, hangul, was created. Nowadays, South Koreans write with hangul or a mixture of hangul and Chinese writing characters.

The South Koreans’ way of speaking differs from that of the North Koreans, but they understand each other. English dominates as a second language.

The Constitutional Court decides that the United Progressive Party (UP), which is also represented in Parliament, should be banned. UP has been criticized for supporting North Korea and for having plans to create a communist South Korea. The government turned to the court last year with a request for banning the party after several UP members were arrested on suspicion of planning to overthrow the government if war would break out with North Korea.

The presidents of China and Korea sign a free trade agreement between the countries. The agreement reduces tariffs and trade restrictions in 17 areas over a 20-year period, but this does not apply to rice and the automotive industry. China is South Korea’s largest trading partner. The agreement must be approved by South Korea’s parliament before it can take effect.

About 10,000 athletes from 45 nations participate in the Asian Games in the bustling port city of Incheon west of Seoul. The Games, an Asian variant of the Olympic Games, are held every four years with a variety of sports on the program.

Former head of South Korea’s spy agency National Intelligence Service, Won Sei-Hoon, sentenced to prison for organizing a massive online campaign against liberal politicians in the 2012 presidential and parliamentary elections Won Sei-Hoon, who was the spy chief of former President Lee Myun-Bak, has recently served a prison sentence for corruption.

Shaking details about how a young conscript army soldier died after being beaten by other soldiers for several weeks provokes strong reactions. A debate on the conditions of conscription follows, in light of many other cases of brutal treatment.

The Government Party is moving forward

The ruling Saenuri Party is doing well in a parliamentary election and is strengthening its majority there, despite the problems following the ferry disaster. The election result is a severe blow to the newly formed opposition party NPAD (which is largely made up of the former Democratic party). NPAD’s two chairmen, Ahn Cheol-Soo and Kim Han-Gil, announce after the election that they will resign.

A package of measures for increased growth

The government is launching a two-year package of $ 40 billion to stimulate the economy. During the grief period following the ferry disaster in April, South Koreans traded less, which led to slowed growth rates. The Ministry of Finance writes down the forecast for the year’s growth from 3.9 percent to 3.6 percent.

Chung Hong-Won is allowed to continue

A few days later, President Park decides to give up trying to appoint a new prime minister. She announces that Chung Hong-Won may remain at her post.

At the end of the month, former journalist Moon Chang-keuk announces that he is not running for prime minister. He was the second candidate nominated by President Park for the post within a month. Among the members of the government, only the Prime Minister needs to be approved by Parliament.

A soldier who does his military duty near the border with North Korea shoots five of his fellow soldiers to death.

A tie between government and opposition

The ruling Saenuri Party (NFP) is doing well in the regional and local elections in early June, despite criticism of the government’s handling of the ferry disaster in April and President Park Geun-Hye’s declining popularity thereafter. Of the 17 largest cities and provinces, NFP takes home 8, while the largest opposition party New Political Alliance for Democracy (NPAD) wins the remaining 9 cities and provinces. NFP is believed to have succeeded in its election promises to reform the state administration and increase security, as a result of the ferry disaster. As a whole, local elections became a largely undecided measure of power between the ruling party and the opposition. In Seoul, Mayor Park Won-Soo from the opposition party NPAD was re-elected. Park, with a background as a human rights activist and lawyer,

President Park Geun-Hye appoints the former Supreme Court judge, Ahn Dai-Hee, as new prime minister. An important priority for Ahn as new prime minister would be to address the problems within the state apparatus that were discovered in connection with the ferry disaster. However, Ahn shortly afterwards refuses the Prime Minister’s post after being criticized for having received a large sum of money in fees after he quit as a judge.

The South Korean government decides to implement several changes after the ferry disaster in April. Among other things, the Coast Guard, which made several misses during the rescue work, will undergo a reorganization. An investigation has also found that the ferry had three times as much load as was allowed and that it was the reason why it dropped after completing a sharp turn. Prosecution has been brought against the captain of the ferry and three more in the crew for causing death to another. A company responsible for the safety inspections of the ferry is also awaiting prosecution. President Park Geun-Hye plans to set up a commission to investigate the corruption behind the disaster.

A new party is formed

The Democratic Party (DP) forms a new party New Political Alliance for Democracy (NPAD) together with former IT businessman Ahn Cheol-soo and his supporters. It is hoped that the new party, which will focus on security issues in particular, will have a greater opportunity to defeat the Saenuri Party in the coming elections.

On February 20, more than 100 South Koreans come to North Korea to meet relatives in neighboring countries.

Government representatives from North and South Korea meet a few days later to discuss, among other things, the planned family reunion. The meeting is held at the highest level since 2007.

North Korea and South Korea agree to allow families that split after the Korean War and since then lived on different sides of the border to see each other. The reunion meetings will be held in February. The last time such meetings were arranged between the countries was in 2010.

Statistics are released showing that South Korea’s economy grew by 3.9 percent in the last quarter of 2013. It is the highest growth rate in three years. Overall, for the whole of 2013, GDP was estimated to have increased by 2.8 percent, a calculation that was later revised up to 3.0 percent.