In Sri Lanka there are several people groups. Most are the Sinhalese who make up three quarters of the population. The second largest group is the Tamils. The country is densest populated in the southwest, where the capital Colombo is located. The arid areas of the north and east are sparsely populated, with the exception of the Jaffna peninsula at the far north.

Population growth is low compared to other developing countries. Birth rates have been kept down through family planning, that is, national information campaigns aimed at persuading parents to have fewer children. The relatively low birth rates combined with an ever-increasing life span have made Sri Lanka one of the oldest populations in Asia. 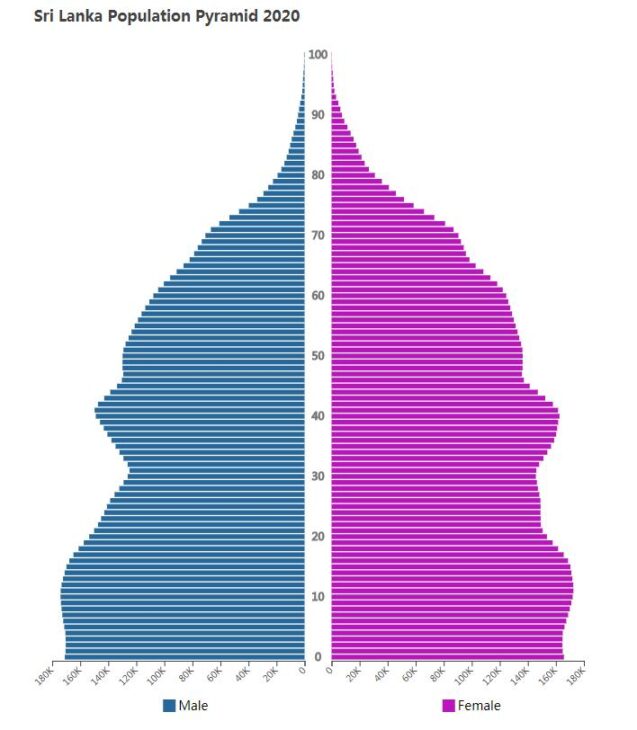 The Indian Tamils came during the colonial period in the 19th century to work on plantations. They still live today mainly in the plantation areas in the central highlands; they are also called mountain camels. Despite their common origins, the two groups have hardly any ties to each other. The Indian Tamils ​​stood outside the civil war between Sinhalese and Tamils ​​that went on from 1983 to 2009 (see Modern History).

Other minorities and castes

The Tamils ​​often feel like second class citizens and consider themselves discriminated against in many areas of society. The struggle of the Sri Lankan Tamils ​​for an independent state in the north was the backdrop to the civil war that required 80,000 to 100,000 people’s lives. Over half a million people are estimated to have fled the country while just over two million others were forced to leave their homes but remained in Sri Lanka. After the war, some 300,000 internally displaced persons were in government-controlled camps. Still in 2018, around 37,000 of them could not return home.

A relatively large minority consists of Muslims. They are officially called Moors (an old Spanish word for North Africans). Some of them have orders from Arab traders who came to the island hundreds of years ago, but most are ethnic Tamils ​​who converted from Hinduism. They live scattered along the coasts, not least in the eastern province where they make up about a third of the population. The Muslims often came under pressure during the civil war and in recent years have become the target of radical Buddhist groups who believe that Muslims have too much influence in society. Buddhist monks have led violent attacks on mosques and Muslim companies and several deaths have been demanded.

Among the Muslims there is a small group called the Malay, whose ancestors came from Java during the Dutch colonial empire in the 17th and 18th centuries.

Another minority are the burghers, who are descendants of Dutch and Portuguese colonizers. The indigenous peoples are almost completely displaced by the other ethnic groups. An unknown number, perhaps a thousand people, live in inaccessible areas.

Like the Indians, the Sinhalese and Tamils ​​are divided into castes (social classes). Everyone is born into a certain caste and the caste affinity determines everything from the person’s career opportunities to the choice of partner. Although discrimination on grounds of caste is prohibited, the caste system still plays an important role, not least in politics. Most Indian Tamils ​​belong to lower castes.

The Sinhalese speak an Indo-European language, Sinhalese or Sinhala, which is related to languages ​​spoken in Northern India. Tamil language Tamil is a Dravidian language also spoken in the southern Indian state of Tamil Nadu.

The old colonial language English is in decline as a first language but is common in large parts of society, not least in upper social classes. English is also used to some extent within the administration. In religious contexts, pali (the sacred language of Theravada Buddhism), Arabic and Sanskrit is used.

Sinhalese and Tamil are official languages; English is passable; in religious contexts Pali, Arabic and Sanskrit are used

Fonseka is sentenced to prison

General Sarath Fonseka, President Rajapaksa’s chief challenger for power, is sentenced by a military court to 2.5 years in prison for illegally being politically active during his time as Chief of Defense. Fonseka is dismissed from the armed forces and deprived of his general title. Later, Fonseka is also declared guilty of violating military procurement rules. He then loses his seat in Parliament.

The UN launches an investigation into human rights violations

UN Secretary-General Ban Ki-Moon appoints an expert group to investigate allegations of human rights violations committed by both sides in the end of the civil war in the spring of 2009. The message triggers popular protests outside the UN headquarters in Colombo. Government representatives also participate in the demonstrations. The UN responds by temporarily calling home its highest envoy to the country.

Tens of thousands of civilians remain in camps

About 68,000 civilians are still estimated to remain in the refugee camps set up at the end of the civil war in spring 2009. In addition, many of the around 10,000 LTTE soldiers who surrendered or were arrested at the end of the war are still believed to be in custody.

In the new government appointed by President Pajapaksa after the parliamentary elections, two of his brothers are given important posts. A third brother is appointed President of Parliament.

The government side wins the parliamentary election

The ruling party alliance The United People’s Freedom Alliance (in English abbreviated to UPFA) wins 144 out of 225 seats in the parliamentary elections. Opposition Alliance United National Front (UNF) gets 60 seats. The newly formed Alliance Democratic National Alliance (DNA) gets 7 seats, one of which goes to the arrested Fonseka. The remaining 14 mandates go to the Tamil National Alliance (TNA) which has its main support among Tamils ​​in the north and northeast.

Opposition leader Fonseka is being prosecuted in a military court for illegally conducting politics while he was an active military and for violating military procurement rules. Fonseka, who was previously the country’s chief of defense and President Rajapaksa’s close ally, is also accused of planning a coup against the president as well as murders of him and his family. Fonseka denies all charges. The day before the arrest, Fonseka had stated that he was prepared to testify in an international war crimes tribunal on human rights violations committed by the government during the final phase of the civil war in the country from 1983 to 2009.

Rajapaksa is re-elected as President

Sri Lanka’s incumbent President Mahinda Rajapaksa wins the presidential election over challenger General Sarath Fonseka, with 58 percent of the vote against 40 percent. Voter turnout is 50 percent, the lowest since 1947. Fewer than 30 percent of voters in Tamil-dominated areas in the north and northeast. Independent observers believe that the choice was generally correct, even if there were violent events. Fonseka claims the election was characterized by cheating and threatens to go to court to have it annulled.