Before the civil war, Syria was one of the most densely populated countries in the Middle East, but the population was unevenly distributed. Most people lived along the coast in the west and around the big cities of Damascus in the south and Aleppo in the north.

When the war broke out in 2011, Syria had just over 21 million residents. Since then, more than a quarter of the population has fled the country. At the beginning of 2020, the UN stated that over 5.5 million Syrians were living as refugees in neighboring countries (of which more than 3.5 million in Turkey, 1 million in Lebanon, at least 650,000 in Jordan, 300,000 in Iraq and 130,000 in Egypt). More than 6 million were on the run inland. 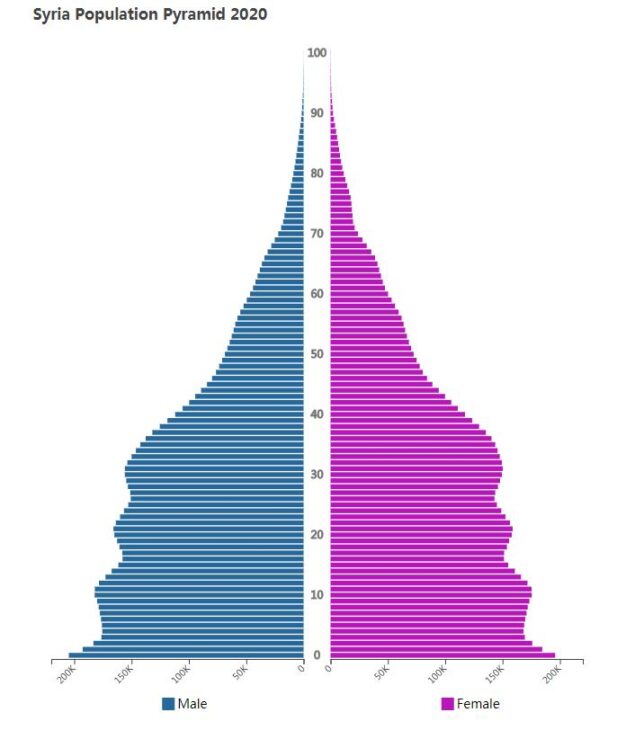 The majority of Syrians are Arabs and most of them are Sunni Muslims. An important minority are the Alawites who are Arabs but apply their own version of Islam (see Religion). The Alawites were severely discriminated against until the 1960s, but since 1970 Syria has been ruled by the Alawite family Assad, which has placed its cousins ​​on important posts in the state apparatus. Before the war, the Alawites made up ten to twelve percent of the population, but they are now estimated to correspond to about fourteen percent as they remained in the country during the war while other groups have moved.

Of the other ethnic groups, the Kurdish is the largest. In addition, there are smaller groups of Armenians, Tarchas, Assyrians and Syrians, Turkmen and others. Several of these groups have been mixed with the Arab population and some speak Arabic as their first language.

Historically, there were many Bedouins (Arab nomads) in Syria, but the number has dropped sharply. Before the war, the Bedouin accounted for barely more than 5 percent of the population. At the Golan Heights occupied by Israel in 1967, approximately 20,000 Arabs live, mainly Druze (see Religion) and about as many Israeli settlers.

Many of the Kurds and Armenians in Syria fled to the country from persecution in Turkey during a period from the beginning of the 1920s until the Second World War. The Kurds live north of Aleppo and in northeastern Syria. Most are farmers. Armenians live in the cities and work mainly with trade and crafts. The Cherks emigrated to Syria when the Caucasus was captured by the Russians in the 19th century. They are now spread between town and countryside. Many Cherkesses used to live on the Golan Heights, but were forced out of there when the area was occupied by Israel.

Before the civil war, Syria housed approximately 470,000 Palestinian refugees for which the UN refugee agency UNRWA was responsible. The Palestinians, who in most cases have lived in the country since the 1940s, are not granted citizenship but have most other civil rights. Almost two-thirds of Palestinians are now fleeing inland or neighboring countries.

After the Iraq war in 2003 (see Iraq: Modern History), Iraqis were also a large refugee and immigrant group. In early 2010, there were 750,000 Iraqis in Syria, but some returned to Iraq when the conflict in Syria began the following year.

The government has had a policy of creating a more homogeneous society by emphasizing Arab culture, and all Syrians are officially considered Arabs. Attempts to create a Syrian national feeling were met by difficulties as many peoples hold hard on their own identity.

In 2014 – when civil war was going on throughout Syria – the Kurds proclaimed three autonomous cantons in the north. In 2016, after further victories, the Kurds announced that they had established a federation they call Rojava (read more in Democracy and Rights and Conflicts: The Kurds in Syria).

Several minority languages ​​are spoken in Syria, but the Arabic is strongly dominant. As in all Arab countries, Syrians learn standard Arabic (fusha) in school. It is based on the classical Arabic of the Qur’an and is used as a written language, in the media and in all formal contexts, but not in everyday life. The Arabic spoken in the home and on the street in Syria is very similar to the Palestinian and Lebanese dialects, but there are differences within the country and between cities and countryside. In eastern Syria, for example, the dialect is similar to the Iraqi. Alongside the Arabic, there are minority languages: Kurdish, Turkish, Armenian, Syrian and others.

In three isolated villages north of Damascus, a few thousand people still speak Aramaic, the language that is believed to have been the mother tongue of Jesus and used at that time in large parts of the Middle East. Best known of these villages is the Christian monastic village of Maaloula. The art of writing Aramaic is mastered by only a few people.