Taiwan is very densely populated, but Population growth has basically stopped. Combined with increased life expectancy, this has led to an unusually fast aging population. The decline in childbirth is believed to be due to Taiwanese marrying later and waiting to give birth to children, while the number of divorces has also increased in recent years.

Most residents are ethnic Chinese. You distinguish between Taiwanese or “native” (the leg hangers) and “mainland Chinese” (the waishengren). The former are descendants of Chinese who settled in Taiwan mainly during the 18th and 19th centuries; they make up a majority of the population. The mainland Chinese are mainly descendants of those who fled to Taiwan in connection with the communist takeover of China in 1949. For a long time, mainland Chinese dominated government and politics on the island, but the “natives” have always had a strong economic position and their political influence has increased. 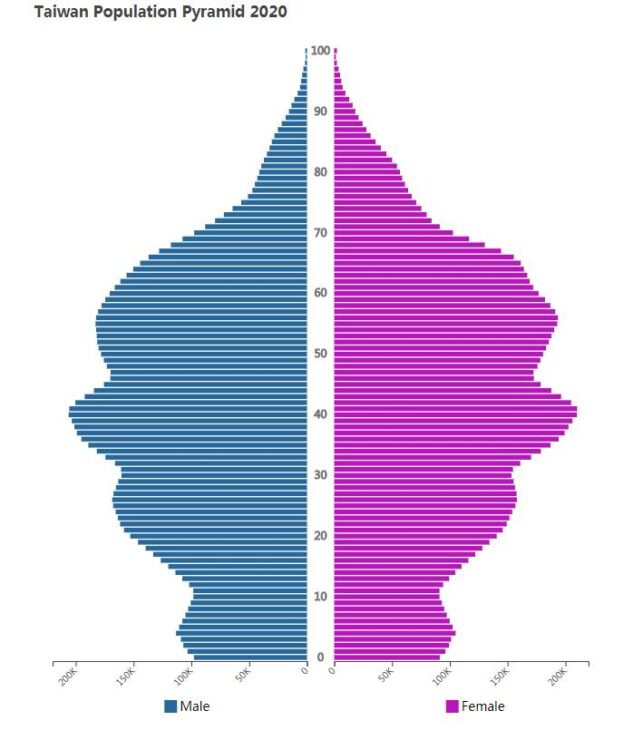 There are 14 officially recognized indigenous peoples, of which ami, paiwan and atayal are the largest. These groups are of Austronesian descent and at least some of them have been on the island for thousands of years. Most are integrated into modern society, but some live in a kind of reserve in remote mountain regions.

In recent decades, immigration to cities has increased as fewer Taiwanese support themselves for agriculture. Since the 1990s many have moved to China.

Mandarin, the North Chinese dialect which is the national language in China, is the official language and dominates in public context. Until the 1990s, it was the only permitted language of instruction. However, the most common mother tongue is Taiwanese, a variant of my South Chinese dialect. Many also speak chops, another Chinese dialect. The Chinese written language is common to all dialects. In Taiwan the old form is used, without the simplified signs that apply to the mainland. However, from 2002, just as on the mainland, the so-called pinyin system began to be used to write Chinese in Latin letters. Two competing pinyin systems exist, but since 2009, the only officially recognized same is used in China.

President Chen Shui-bian is sentenced to another two years in prison for money laundering and counterfeiting.

The DPP announces that its candidate in the presidential election will be party chairman Tsai Ing-wen. She is the first woman ever to run for president.

What is described as “the most serious espionage case in 50 years” is revealed. A Taiwanese general, in charge of the military’s telecommunications and electronic information department, is suspected to have spied on China’s behalf.