More than four-fifths of the population identify themselves as ethnic Tajiks, a people of Persian origin. Of the others, the majority are uz cups. Most Russians left Tajikistan during the 1990s. Tajik is official language but Russian is still widely used.

The population is young; just over a third are under 15 and only 3 percent of the population is 65 or older. Population growth was very high at the time of the independence of the Soviet Union in 1991 and outweighed the great losses caused by the civil war in 1992-1997 and the emigration caused the next few years (see Modern History). But since the mid-1990s, growth has slowed down through emigration and decreased birth rates. Nearly three-quarters of residents live in rural areas. 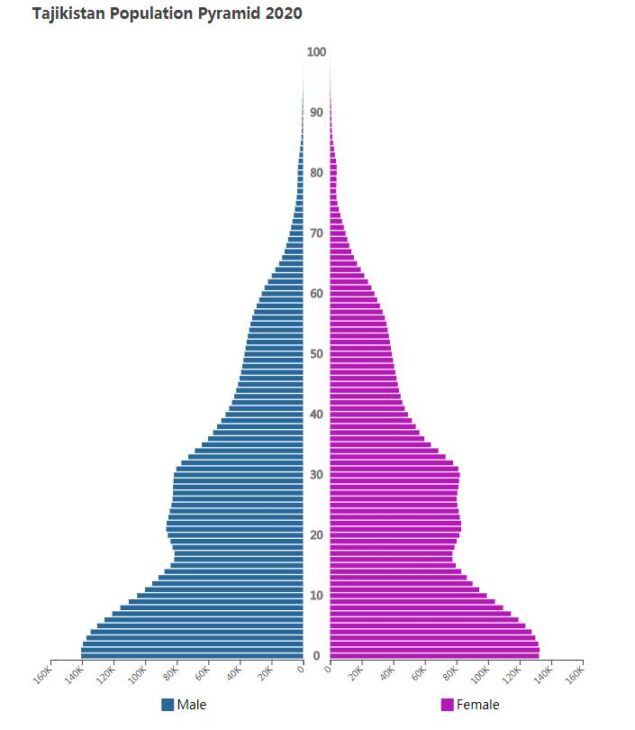 Because of the mountainous terrain, the residents have lived quite isolated from each other, which has counteracted the emergence of a Tajik national feeling. Many feel stronger loyalty to the region they live in and their own clan than to the Tajik state (see also Political system).

There are about 80 different ethnic groups represented in Tajikistan. The share of ethnic Tajiks has increased since independence. In the context of the civil war in the 1990s, many residents fled the country, and among those belonging to minority people, few have returned.

The Persian origin of the Tajiks distinguishes them from the Turkish peoples who have given names to other Central Asian states: Uzbekistan, Kyrgyzstan, Turkmenistan and Kazakhstan. There are at least as many Tajiks living outside Tajikistan as inland, most in neighboring Afghanistan and Uzbekistan. The cities of Buchara and Samarkand with surrounding countryside in Uzbekistan are then dominated by Tajiks. At the same time, the uz cup is the majority around the city of Chudzhand in northern Tajikistan. In many places, the people groups are mixed with each other.

Towards the end of the Soviet era (1920–1991), the Russian minority made up almost 8 percent of the population, but it is now estimated to be 0.5 percent. The emigration of the Russians has created problems for the economy and the education system, since they were comparatively well-educated and often held key positions in different areas of society.

After the end of the civil war in 1997, many Tajiks began to go abroad to work. Most people go to Russia while others go to Kazakhstan. Up to 1.5 million Tajiks are expected to work abroad. This corresponds to one third of the working-age population.

Tajik already replaced Russian as an official language in 1989. However, according to the constitution, Russian has status as a language for “interethnic communication”, that is, between people groups. But according to a law passed in 2009, only Tajik is allowed in official documents. The somewhat contradictory injunctions reflect a conflict over language and nationalism that is going on in the country and which creates friction even in relation to Russia.

The campaign for “Tajikisation” of society became clear when the President in 2007 declared that the suffrage of family names would cease. He himself deleted the ending -ov in his last name. With changed writing also by the first name, and transcription from Tajik rather than Russian, Emomali Rachmonov instead became Emomalii Rahmon. In 2014, the campaign was renewed to get the residents to adopt Tajik-sounding surnames; several government members stroked Russian endings.

Many non-Tajiks, but also some Tajiks, do not master Tajik, especially in written form. Tajik belongs to the Iranian languages ​​and is closely related to Persian, which is spoken in Iran. Small groups in the autonomous Köhistoni Badachsjon in Pamir (see Geography and Climate) speak Iranian languages ​​that are related to the Tajik language.

Prior to the Russian Revolution of 1917, the Arabic written language was used in Tajikistan as well as in other Central Asia. In 1927, to break the Muslim traditions, the Soviet power introduced the Latin alphabet in Central Asia. It was replaced in 1940 by the Cyrillic alphabet (like Russian), which is still used.

A railway bridge is blown up, causing disruptions in rail traffic from Uzbekistan (see also January 2011 and March 2011).

When a Russian and an Estonian pilot are sentenced to multi-year prison sentences for smuggling, Russia threatens the mass expulsion of Tajik guest workers from Russia. Deportations of guest workers begin shortly thereafter.

Children are forbidden to go to the mosque

A new law on the ban on children in mosques comes into force. Children under the age of 18 may only visit mosques at religious festivals and funerals. According to the government, the intention is to prevent Islamist radicalization of the young. Parents are held liable for violation, which can result in imprisonment for up to twelve years.

The government states that Islamist leader Abdullo Rachimov (also known as Mullo Abdullo) and ten of his followers have been killed by security forces. Rachimov was the country’s most wanted rebel leader since the civil war of the 1990s and lived in Afghanistan for a long time. He is suspected of the assault against government soldiers in September 2010.

The state railway states that a blockade of traffic from Uzbekistan that has been going on and off for over a year has cost around US $ 20 million.