Thailand’s population is one of the most homogeneous in Southeast Asia. The vast majority of residents speak Thai and profess to Theravada Buddhism. However, there are regional differences within the Thai population and several ethnic minorities in the country. The population is concentrated to Bangkok and the plain north of the capital.

Despite rapid economic development in the country, half of the Thai people still live in the countryside, but there is an extensive move into the cities. Most settle in Bangkok, the country’s by far the largest city. Around 16 million people live in the region in and around Bangkok, while western and northern Thailand are sparsely populated. 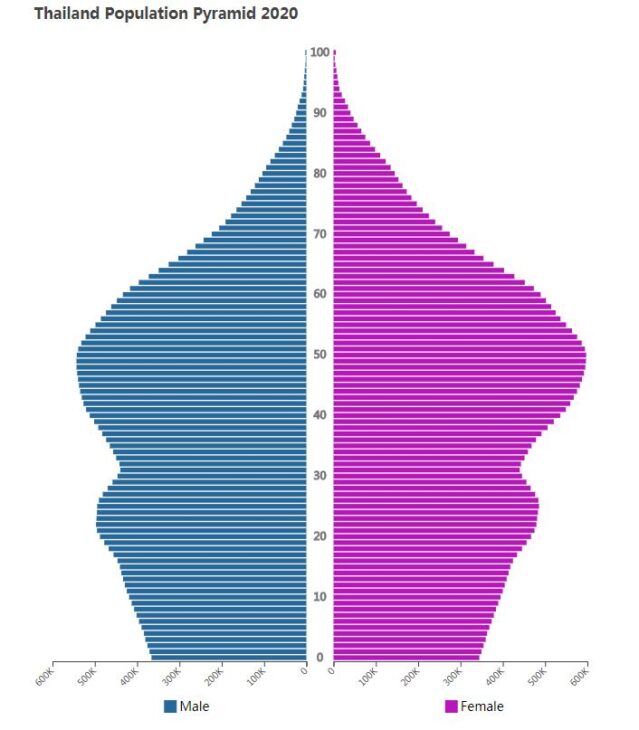 Annual Population growth has declined sharply, from 1.8 percent in the early 1980s to well below 1 percent at the end of the 2010s. Nearly one in five Thais are under 15 years of age.

The population of northeastern Thailand is often called Lao and is more or less identical to the majority people in Laos. They are sometimes counted as their own people. The Chinese are otherwise the largest minority group. They have been in Thailand since the 1300s and form an important part of business.

In the north and west, various mountain people live, including hmong, yao, akha, lahu, lisu and karen, which are also found in neighboring countries. They are indigenous people who have largely retained their languages ​​and traditions and are poorly integrated into modern society. The mountain people, today a total of a million people, often live in misery with neglected schooling and substance abuse problems. Although they have lived in Thailand for many generations, they have often been denied citizenship and thus many of the rights of other Thais.

In the far south, nearly 1.5 million Muslim Malays live with strong ties to Malaysia. In the area, several groups are fighting an armed struggle with the goal that the Malay-dominated provinces should gain greater autonomy or become independent from Thailand (see Conflicts, Southern Thailand). At the border with Cambodia, Khmer people live, largely refugees, and along the border with Laos live some Vietnamese.

In Thailand, there are also around five million people who lack Thai citizenship, an increase from 3.7 million in 2014. About four million of these are guest workers from the poorer neighboring countries Myanmar (formerly Burma), Laos, Cambodia and Vietnam. Some have documents such as work and residence permits, others do not.

Around half a million are stateless (as part of the mountain people), while the rest are mainly refugees and asylum seekers. Along the border in the northwest, more than 100,000 refugees from Myanmar live in about ten refugee camps under poor conditions. Thousands of refugees from the Muslim minority rohingya in Myanmar have in recent years tried by boat to get to Thailand away from persecution in their homeland. Many of them have been towed out again by Thai authorities, with several deaths as a result. Along the border with Laos there are thousands of illegal refugees from the hmong population in the neighboring country.

Thai, or Thai, consists of four quite different dialects that geographically follow the country’s four main regions. The dialect of the Chao Phrayas plain, central Thai, serves as a national language, for example in higher education and in the mass media. Central Thai contains early loan words from the Chinese and has also been influenced by the Sanskrit, Khmer and Theravada Buddhist religious ceremonies, the language of Pali. In addition to Central Thai, there are the dialects North Thai, South Thai and Lao.

The Thai alphabet was introduced in 1283 by King Ramkhamhaeng. It contains 44 consonants, 24 vowels and four diacritical characters indicating tone.

Recently, more and more English loanwords have penetrated into central Taiwan, especially in terms of technology and science. English is the most important language of commerce and children learn English in schools.

In addition to Thai, a number of minority languages ​​are spoken within the country’s borders, including Chinese dialects, Malay and Khmer. The many mountain people speak their own languages.

Prosecution is brought against a number of leaders for the yellow shirts. They are accused of illegally entering a government building in August 2008 and of hindering other access to Parliament. Those convicted on both counts are at risk of 12 years in prison.

Abhisit is charged with shooting dead

Former Prime Minister Abhisit Vejjajiva of the Democratic Party is charged with killing the police against a taxi driver during the violent red-shirt demonstrations in Bangkok in 2010. Prosecution is also being brought against the then Deputy Prime Minister Suthep Thaugsuban. Suthep has left the Democratic Party and is leading a newly formed protest group called the People’s Democratic Reform Committee (PDRC). According to the indictment, the two men are ultimately responsible for the taxi driver’s death, because they gave the order that led to the police intentionally shooting the man to death. A conviction can result in the death penalty or long-term imprisonment. Vejjajiva denies the murder charges, and supporters of the Democratic Party say the prosecution is politically motivated.

A relatively newly formed royalist, Thaksin-hostile group, called Protect Thailand (Pitak Siam), is holding a big demonstration in Bangkok in protest of the government. At least 10,000 people join, many of whom are believed to be supporters of the yellow shirts. Protecting Thailand is led by a retired general and aims to overthrow the Yingluck government, which the group accuses of being corrupt and of not showing the king sufficient respect. Kravall police barricade the government building and disperse the crowd.

The Truth and Reconciliation Commission of Thailand submits its final report on the causes of the political violence in Bangkok in April-May 2010. The Commission is striving for a balanced final report and states that both security forces and the red shirts contributed to the deadly violence. The reaction is strong from the red shirts, which point out that the Commission is omitting what they believe was excessive police violence against the protesters. More than 90 people were killed in the violence in the spring of 2010.

The yellow shirts stop the debate about reconciliation

The yellow shirts block the parliament building in Bangkok in protest of a debate to be held there about how the reconciliation process between the country’s political camps should go. The yellow shirts fear that the debate over reconciliation will lead to Thaksin getting amnesty and being able to return to Thailand. Parliament’s Speaker postpones the debate and says it will be held at a later date.

The House of Representatives Committee on National Reconciliation submits its proposal on how national reconciliation should be reached between Thaksin opponents and supporters. The committee proposes impunity to all those involved in the violent government-critical protests in Bangkok in April and May 2011 (mainly red shirts). The Committee also wants all corruption charges against Thaksin brought by the Asset Review Committee (AEC) to be closed. The proposal is adopted by the House of Representatives and passed on to the Government for further consideration. The Government of Thailand Party votes for the proposal, while the Democratic Party abstains.

Common mine clearance at the temple

A joint Cambodian-Thai working group agreed that the two countries should start clearing mines in the area adjacent to Preah Vihear. However, it is not possible to agree on troop retreat from the temple complex.

A new constitution must be developed

The government appoints a group that is tasked with drawing up a proposal for a new constitution.

The founders of the yellow shirts are sentenced to prison

Sondhi Limthongkul, media mogul and one of the founders and leaders of the yellow shirts, is sentenced to 20 years in prison for fraud committed in the 1990s. He is convicted of forging documents to secure a $ 36 million loan to his media company.

Suspicious attacks against Israelis are averted

A building in Bangkok is broken into pieces. Three Iranian men flee from the building at the explosion. One of them then throws a grenade at a passing taxi and injures five people. He is arrested after being seriously injured when he tried to throw a second grenade. Another of the three suspected terrorists is later arrested at Bangkok International Airport. The third Iranian is arrested a day later by Malaysian police in Kuala Lumpur. Another three Iranians are arrested just over a week later. Thai police suspect the killing was aimed at Israeli diplomats. Police find links to similar assaults, also targeting Israelis, carried out in Delhi, India and Tblisi, Georgia, a day earlier. Israel accuses Iran of being behind the attacks, but Iran refuses to interfere.

The Bangkok police arrest a man with Swedish and Lebanese citizenship. He is suspected of being involved in the planning of an imminent terrorist act. The man is said to be linked to the Lebanese Hezbollah movement. The police also find several tons of explosives. According to information from the US and Israel, attacks have been planned against Jewish targets in Bangkok and against bars frequented by foreigners.