Turkey’s population was estimated to be about 82 million in 2018. The most densely populated are the Marble region of the northwest, including Istanbul, and the coasts of the west and south. The inland east of Ankara is sparsely populated.

Turkey’s residents are younger and population growth is higher than in EU countries. About a quarter of the population is under 15 years of age. Birth rates have steadily declined since the 1950s, but the population is still growing, with around 1,200,000 people in 2018. 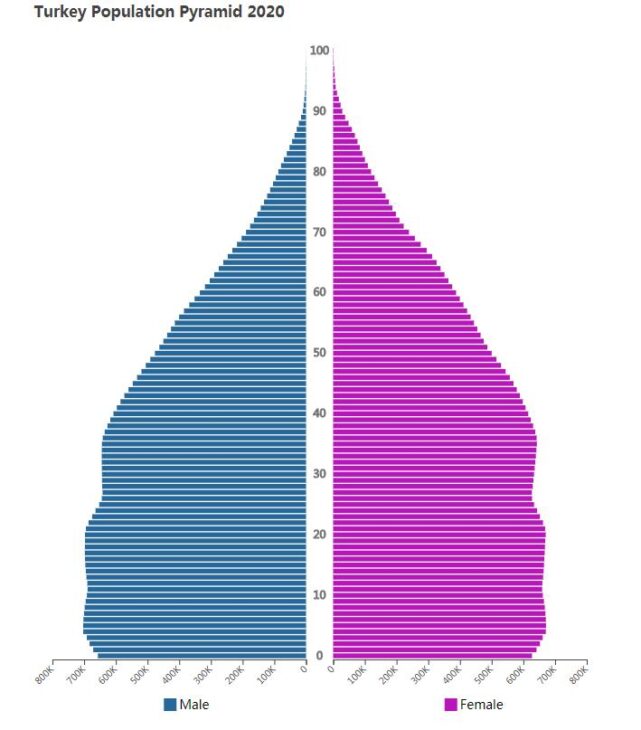 At least three quarters of the population can be described as “ethnic” Turks. However, these originate not only from Turkmen who immigrated 1,000 years ago, but also from other peoples who lived in Asia Minor. Several millions are descendants of Muslims who previously lived outside today’s Turkey, mainly in the Caucasus and the Balkans.

Among the many peoples who lived in Asia Minor before the arrival of the Turks were the ancestors of the Kurds, who today make up about 20 percent of the population. Exactly how large a proportion of Kurdish residents is uncertain, partly because of assimilation and relocation, but also because the Turkish authorities for decades refused to recognize the Kurds as a special group of people. More Kurds live outside today than in the Kurdish provinces in the southeast.

With the exception of the Kurds, the minorities are small. Some Arabs live along the border with Syria and Iraq. In the Northeast, Caucasian languages ​​are spoken by Cherks, Georgians and Lazers. Turkey also has a not insignificant minority of Roma.

Minority issues are sensitive. According to its interpretation of the 1923 Lausanne Treaty (see Older History), Turkey does not recognize any ethnic minorities, only small “religious” minorities. In eastern Turkey lived formerly Armenians, in the west, Greeks lived along the coast. Armenians, Greeks and Jews are today officially recognized as religious minorities. But in 2016, it was estimated that there were only around 50,000 Armenians, 20,000 Jews and just over 2,000 Greeks left in Turkey, mainly in Istanbul.

In the Ottoman Empire, which preceded today’s Turkey, people were originally asked less for ethnicity than for religion. Muslim people were basically equals, while special laws applied to Christians and Jews. With Islam as a starting point, they are usually considered “protectionists”.

During the 19th century, nationalist movements from Europe penetrated the Ottoman Empire. Greeks, Serbs and other people in the Balkans freed themselves. When Christian Armenians, who have lived in eastern Turkey for millennia, expressed similar aspirations, the Ottoman central government responded to the end of the 19th century with bloody persecution. During the First World War, the so-called young Turks feared that the Armenians would cooperate with Russia.

In the winter of 1915, almost two million Armenians were expelled from the area north of Lake Van. The deportation degenerates into what Armenians, with the support of many historians, describe as a genocide, in which Armenian Kurdish neighbors also took an active part, but the number of victims is disputed. The Encyclopaedia Britannica encyclopedia states that about 600,000 Armenians were killed or killed by hiding during the flight, but other sources, in particular Armenian sources, indicate higher numbers, sometimes 1.5 million. Turkey recognizes 300,000 dead Armenians as part of World War I’s loss figures.

After World War I, there were also strong tensions between Turks and Greeks (see Older history). The newly established Turkish Republic and Greece carried out a huge population change. One and a half million Greeks were deported from Turkey, which instead received half a million Turkish-speaking Muslims from Greece.

Since the 1960s, there has been a large emigration of Turks to Europe, mainly Germany, but during the country’s rapid economic growth after the turn of the millennium, Turkey itself has become a target for economic migrants from, for example, Eastern Europe and Central Asia. A large number of them live in unregulated conditions and are not found in population statistics. Thousands who have really wanted to get to Western Europe, not least Syrians and Afghans, have been trapped in Turkey since the EU closed its external border.

Turkish is an Altaic language with roots in Central Asia. Very closely related languages ​​are Azerbaijani (Azerbaijan-Turkish) and Turkmen.

In the Ottoman Empire, the upper-class language was almost a mixture of Turkish, Arabic (the religious language of Islam) and the culturally admired language of the Turks. When the Republic of Turkey was proclaimed in 1923, its founders wanted to create a unified nation where everyone, regardless of origin, would consider themselves Turks. In 1928, the country father Kemal Atatürk (see Modern history) initiated a radical language reform. The national language was purified from Arabic and Persian loanwords. The Arabic alphabet was replaced by Latin letters.

Atatürk’s language reform ignored the fact that many people in the south-east did not speak Turkish but Kurdish – an Indo-European language that is related to Persian. After a Kurdish uprising in 1925, Atatürk forbade the Kurds to speak their language publicly. Only from 1991 did the ban on Kurdish slowly begin to soften. Now, in most contexts, Kurdish is allowed in most contexts, even officially, but only as an optional subject in schools. Kurdish is not a unified language but a common term for at least three major dialectal variants, of which kurmanji and zaza-gorani are the most common in Turkey.

There are also some special letters:
Ç = tj (lattjo)
ğ = a low throat sound, barely audible. Always stands for a vocal whose sound is slightly extended. This letter is not capitalized, as it is never first in a word.
İ = i with a dot over is pronounced like a Swedish i, and the dot is also used in capital letters. The letter must not be confused with
I ı = pronounced much like English indefinite article a
Ş = sch

Turkish is the official language 1

Civilian Kurds are killed in aircrafts

34 civilian Kurds are killed in a plane crash near the village of Uludere near the Iraqi border. The government is forced to admit that the armed forces mistakenly believed that the men were PKK members.

Kurd’s death in the 1930s is lamented

Prime Minister Erdoğan asks for forgiveness for killing almost 14,000 Kurds during the Turkish military’s attempt to crush an uprising between 1936 and 1939. The statement is seen partly as a conciliatory gesture against the Kurdish population but also as a way to blame the current opposition party who was in power then.

Twenty-four Turkish soldiers are killed by the PKK near the Iraqi border, the army’s worst casualties since the 1990s.

All members of the Armed Forces’ top management, the General Staff, are retiring collectively in protest of the arrests of senior officers. The government accepts the resignations and President Gül appoints their successor. Never before has a civilian Turkish government appointed the highest commanders of the armed forces.

PKK’s armistice is canceled. It has been running with shorter interruptions since April 2009.

Unrest in neighboring Syria leads to thousands of people fleeing into Turkey. The government of Ankara has so far had a good relationship with the Syrian regime so far, but is now demanding democratic reforms.

Journalists are accused of competing nationalist

A large number of journalists and other writers are arrested for suspected involvement in the Ergenekon affair. Several are prosecuted. They are not accused of their writing, but of planning coup d’état, membership in terrorist groups and hate crimes.