The population growth in the United Arab Emirates is very high, mainly due to immigration. Between 2005 and 2015, the number of residents more than doubled, to around 10 million. Only about a tenth of the population are citizens of the country. The remaining residents are foreign guest workers, mainly from India, Pakistan and Bangladesh. In addition, in the port cities, there are already several minority groups, mainly Iranians.

Dubai and Abu Dhabi are the most populous emirates, with well over three million residents each. This means that they have over a third each of the country’s total population. Next comes the Emirate of Sharjah with 1.5 million and Ajman with half a million residents. 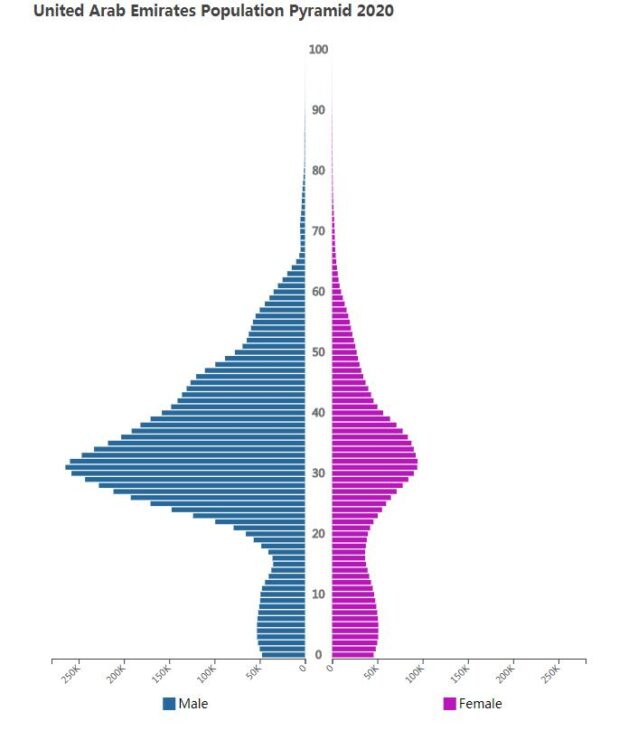 Only the original population, which is almost exclusively Arab, has citizenship. Members of this group are still held together by their common roots in the old Bedouin community. The Arabs are divided into about 40 clan associations. Marriage and career choice are decided by family counsel, where the oldest male relative has the last word. The family is responsible for all members performing financially.

The United Arab Emirates is one of the world’s most urbanized countries; just over four-fifths of the residents are city dwellers. However, 20,000 to 100,000 people still live a traditional nomadic Bedouin life.

Asian guest workers often live in difficult conditions, but still earn significantly better in the Emirates than in the home countries. The housing shortage is large, forcing the guest workers into slums where they are often harassed by the police. A clear majority of guest workers are men, which is why there is a large excess of manpower among the adult population.

Several attempts have been made – not least in economically harsh times – to limit immigration and many guest workers have been expelled. However, the need for labor is so great that the proportion of foreigners is rising rapidly again.

The indigenous people speak Arabic. High Arabic is the official language of the country, but the spoken language is a local dialect that differs very much from the High Arabic. English is used in business. Persian is often spoken in the port cities. The large immigrant groups speak their own languages, mainly Urdu and Hindi.

a small number of Arabs with citizenship 1

Arabic is an official language, English is often used as a trade language 2