Uzbekistan is a coastal state in Central Asia bordering Kazakhstan, Turkmenistan, Kyrgyzstan, Tajikistan and Afghanistan. The cities of Samarkand, Bukhara and Khiva were early important trading centers along the Silk Road. The area was for a long time part of the Persian Empire and was then called Sogdiana. 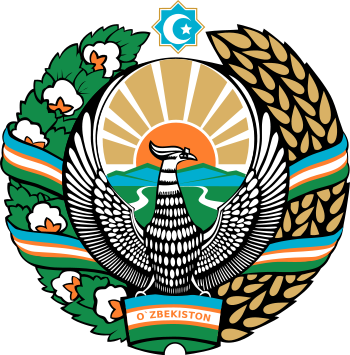 Before the arrival of the Turkish immigrants, the area was populated by a Persian-speaking Iranian people who still, under the name Tajiks, constitute a large minority in Uzbekistan. Around the year 1000 AD. was in the present-day Uzbekistan Kingdom of Ferghana.

The area was conquered by Russia in the late 19th century. Attempts by domestic leaders to establish a democratic republic after the Russian Revolution of 1917 failed and the area was soon incorporated into the Soviet Union. A Turkestan Soviet republic that included Uzbekistan was formed in 1918. In 1924, the borders of the Soviet Union were reorganized and the Uzbeks gained their own Soviet republic. In 1991, Uzbekistan became an independent state.

Large parts of central Uzbekistan are covered by the Kyzyl Kum desert. About 10 percent of the land area consists of densely cultivated, irrigated river valleys. Uzbekistan is rich in minerals, and houses, among other things, the world’s largest gold mine.

With about 26 million residents, Uzbekistan is the most populous country in Central Asia. The population is concentrated in the southern and eastern parts of the country. Uzbekistan was one of the poorest republics in the Soviet Union, and large sections of its population worked in cotton farming in small rural communities. The population still lives to a large extent in the countryside and is dependent on agriculture.

The following objects in Uzbekistan are listed as a UNESCO World Heritage Site.
The year in which the item was added to the list is indicated in parentheses.

Electricity and electrical outlets in Uzbekistan

AS / NZS 3112, also called type I, is a standard for sockets in Australia, New Zealand and several of the countries around the Pacific Ocean.

Bukhara is a city on the Zeravshan River in southern Uzbekistan with 247,661 residents (2005). The city was founded in the 100s and was an important shopping center on the Silk Road. Bukhara has a long tradition as an Islamic university. The city’s main industry is the cotton and silk industries, but is also a center for Uzbekistan’s emerging tourism industry.

In 1993, the historic center of Bukhara was included in the UNESCO World Heritage List.

Samarkand is the second largest city in Uzbekistan, with 319,400 residents (2005). The city is located on the Zeravsjan, a tributary of the Amu-Darja. Samarkand is a city with a long history. In ancient times, it was known as Marakanda, and was an important link for trade between Persia and Central Asia. The city was captured and destroyed by Alexander the Great in 329 BC.

In the eighth century, the city was conquered by the Arabs, and then the Persians. It was for a long time an important trading post by the Silk Road. It was the capital of Persia in the early 13th century but was destroyed in 1221 by the Mongols under Genghis Khan. Later, Samarkand became the capital of Timur Link’s kingdom. For a time, the city was an important part of an Uzbek empire called the Bukhara Emirate.

Samarkand is one of the leading cultural cities in Central Asia. The city is known for its architecture. From the time of Timur Lenk’s descendants, there are several monumental religious buildings, adorned with gold leaf.

In 2001, Samarkand was inscribed on the UNESCO World Heritage List.

According to Countryaah, Tashkent is the capital of Uzbekistan, located in the northeastern part of the country on the border with Kazakhstan. The city has 2.1 million residents (1999). The city dates back to the 4th century BC. and was for a long time an important trading center along the Silk Road. It is mentioned in Chinese sources from the 100s BC. The city was hit by an extensive earthquake in 1966 and has a modern character after the reconstruction.