Uzbekistan is Central Asia’s most populous country. The population increase has been rapid, but has now declined somewhat. The country has a young population; more than a quarter of the population is under 15 years of age. The dominant population group is the uz cups, which make up around three quarters of the population.

The Uzbek originated in the 13th-century people’s mix in Central Asia between Turkish-speaking peoples and Mongolian nomads. The Uzbek people themselves are regarded as descendants of the Mongol ruler Özbek khan (1282–1342). There are also large groups of uz cups in neighboring countries, mainly in Afghanistan and Kyrgyzstan. 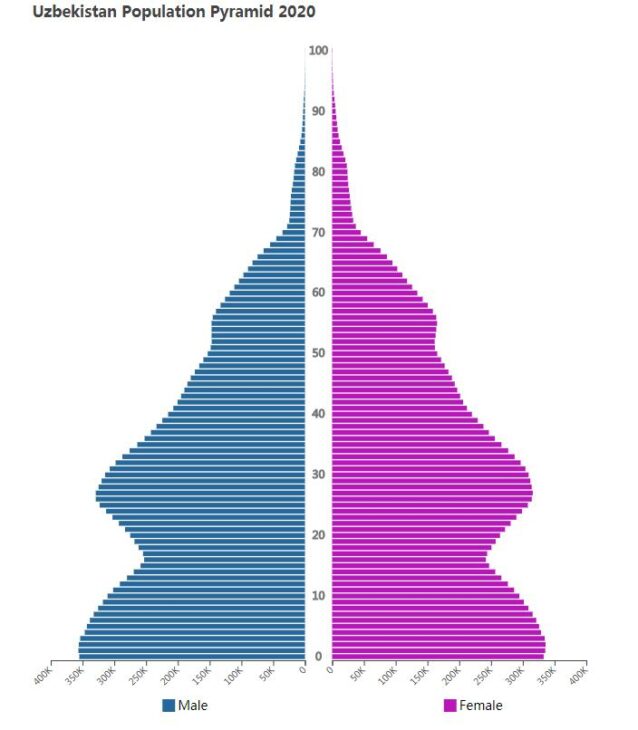 In addition, in Uzbekistan, Russians, Tajiks, Kazakhs and a number of smaller peoples live, many of whom were displaced to Uzbekistan during the Stalin period (1924–1953). The Russians now make up only a few percent of the population. The Tajiks are in the majority in the cities of Buchara and Samarkand, where there are also small groups of Jews and Arabs. In Karakalpakstan, most of the country’s approximately 400,000 caracal packs live, as do the Uzbek people a Turk.

In the late 1980s, tensions between different ethnic groups increased, and ethnic violence shook the Fergana Valley (see Modern History). Opposites remain and among the causes are high unemployment, poor public health as a result of environmental degradation and competition for land and water.

The relationship between the uz cup and the Russians is tense. Uzbek national identity was strengthened after the country’s independence in 1991, when Uzbek became official language and Islamic traditions were emphasized. The requirements for knowledge of the Uzbek language have also been gradually tightened for civil servants.

A lot of Russians in the larger cities can work in trade and private business without experiencing any systematic discrimination, but many Russians have still chosen to emigrate to Russia, and qualified professionals have disappeared.

Uzbek belongs to the East Turkic language group and has more in common with Uyghurs, spoken by the Uyghurs in the Xinjiang Autonomous Region of China, than with the Turkish in Turkey. However, Turks and uz cups can understand each other helpfully.

In the 1920s, the Uzbeks abandoned the Arabic alphabet and, simultaneously with Turkey, switched to Latin writing. Moscow’s concern that the Turkish-speaking peoples of Central Asia would develop close ties with Turkey led to the introduction of the Cyrillic alphabet in the region in 1940. Since 1993, however, there has been a slow return to the Latin alphabet.

Russian is still used in public administration and business as well as in contacts with other former Soviet republics.

about three quarters of the uz cup; minorities of Russians, Tajiks, Kazakhs and others

Uzbek is the official language; In addition, Russian, Tajik and several other languages ​​are spoken

The presidential term is shortened

Parliament’s House of Commons adopts a constitutional amendment that shortens the president’s term of office from seven to five years. The change has been approved in advance by Karimov.

A close ally of Karimov, Ravshan Muxiddinov, is arrested in connection with corruption investigations. He was later sentenced to 15 years in prison for corruption. Muxiddinov was Minister of Justice until October 2011 when he was dismissed by Karimov.

The United States roses and rises

US Secretary of State Hillary Clinton visits Uzbekistan again. She praises the country’s cooperation in American transport to Afghanistan but calls for increased respect for human rights.

After seven years, the United States abolishes its restrictions on economic and military assistance to Uzbekistan.

Exile politicians are murdered in Russia

In Russia, one of the leaders of the opposition movement of Uzbekistan’s popular movement, which was formed in exile earlier in the year, is murdered. The murdered Fuad Rustamhojaev had criticized the regime just before the attack in an interview with the British BBC, and the Uzbek security service had visited his home in Uzbekistan.

Report on death torture in prisons

According to a report by the IGNPU Human Rights Group in Uzbekistan, imprisoned activists are tortured so seriously that 20-30 of them die each year. Hundreds need medical care. The activists referred to by the report were convicted in connection with the Andizan protests in 2005, when hundreds of people were shot dead by the military.

Two journalists are sentenced to high fines after trying to hunger strike outside the presidential palace in protest of media censorship. The two women, Saodat Omonova and Malohat Eshonqulova, who were previously dismissed from the state TV channel Yoshlar (Youth) after a public protest against the censorship, have sent over 50 letters to Karimov about the censorship and demanded a meeting with him. The two journalists hunger strikes at home for a limited period.

The dissident and poet Yusuf Juma is released after three years in prison. He testifies that torture is common in prisons. According to Juma, prisoners are subjected daily to abuse and humiliating treatment. Juma, who was convicted of resisting police during a demonstration, is being released following pressure from international human rights organizations.

HRW is thrown out

The Karimov regime forces the human rights organization Human Rights Watch to close its office in the country. The security service makes several trips and, for example, forces a number of booksellers in Tashkent who specialize in religious literature to close their stores.

Parliament’s upper house approves a number of constitutional amendments, which have already been adopted by the lower house. The reforms mean, among other things, that Parliament has greater influence, for example in the election of Prime Minister. It also gets the right to make a statement of no confidence in the government.

Energy agreement with the EU

Karimov travels to Europe for his first meeting with EU and NATO leaders in six years. Agreements are concluded with the EU on energy cooperation, and talks are being held with NATO on transport through Uzbekistan to Afghanistan.