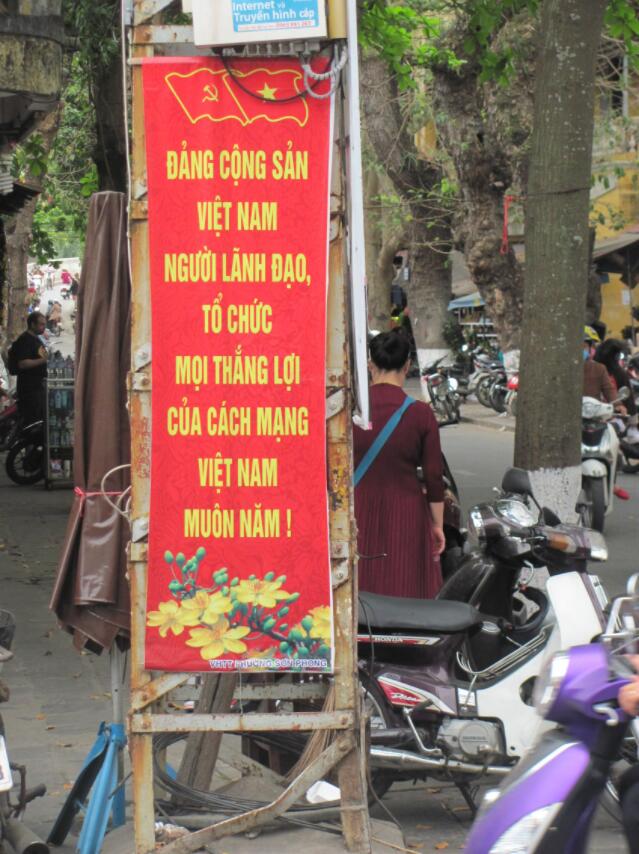 Vietnam does not have a “classic democracy”, but since the mid-1990’s – according to the political scientist Benedict Kerkvliet – many Vietnamese have expressed their political opinion publicly and thus use the newly created freedom to exert pressure on the government and the party and, for example, to withdraw certain ones Forcing decisions.

This contrasts with the opinion of Bill Hayton, the former BBC correspondent in Hanoi, who emphasizes the unchanged Leninist character of the political system in Vietnam and has not seen any major expansion of the people’s political participation since the beginning of the reform policy.

In fact, it can be observed that the Vietnamese leadership is taking massive action against political forces that they see as a threat to the autocracy of the CP of Vietnam. This applies above all to Vietnam’s “new dissidents”, who are increasingly using the Internet and have come together in loose organizations such as “Block 8406” (named after the group’s founding date on April 8, 2006). After Vietnam’s WTO membership was wrapped up, several people critical of the regime were arrested in spring 2007. Two lawyers who are related to “Block 8406” were sentenced to four and five years’ imprisonment in the same year. In June 2009, Le Cong became Dinh who had represented the latter in court, was arrested. In January 2010, after a brief trial, he was sentenced to five years in prison. A co-defendant internet entrepreneur even had to jail for 16 years for “subversive activities against the government” for failing to show the repentance that is commonly demanded of a defendant in Vietnam. Le Cong Dinh was released early from prison for the Vietnamese New Year celebrations in 2013 – possibly a concession to the United States.

In October 2009, six people were also sentenced to several years in prison in Haiphong. They were charged with attaching banners with demands for more democracy to bridges, thereby committing ” propaganda against the government “.

In April 2011 a lawyer was again the target of a show trial: Cu Huy Ha Vu, who studied at the Sorbonne in Paris, was sentenced to seven years in prison and three years of house arrest for “propaganda against the state of the Socialist Republic of Vietnam” (Section 88 of the Vietnamese Criminal Code) sentenced after serving his sentence. Cu Huy Ha Vu, son of Huy Can, a famous Vietnamese poet, dared in 2009 to sue Prime Minister Nguyen Tan Dung for approving the controversial bauxite project in the central highlands. A court in Hanoi upheld an appeal in February 2014 the verdict against Cu Huy Ha Vu, who was subsequently transferred to a prison in Thanh Hoa in north-central Vietnam. In April 2014, Cu Huy Ha Vu was released unexpectedly and was allowed – according to the official Vietnamese version – to travel to the USA for medical treatment. It remains to be seen whether this is the real reason or whether it is more of a form of deportation. Likewise, one can only speculate about whether the early dismissal of Vu and other dissidents such as Vi Duc Hoi and Nguyen Tien Trung is due to pressure from the US and against the background of negotiations on a trade agreement with the US (Trans-Pacific Partnership Agreement) must be seen. In fact, the Vietnamese government had released some dissidents for tactical reasons before the end of the WTO accession negotiations.

Against the background of Chinese activities in the South China Sea, such as the harassment of Vietnamese fishermen, anti-Chinese demonstrations took place regularly on Sundays from June 2011 in Hanoi and Ho Chi Minh City. In a departure from previous practice, the Vietnamese authorities initially let the demonstrations go, only after a month did they step in and attempt to stop the demonstrations with the usual hint that “the party and government would take care of everything.” These restrictive measures were openly and sharply criticized in many Vietnamese blogs – another novelty in Vietnam.

On August 18, 2011, however – as was to be expected – further demonstrations in Hanoi were banned by the city’s people’s committee. When a few hundred political activists nevertheless gathered for a rally in the center of the capital on the following Sunday, plainclothes police stepped in, broke up the demonstration and arrested around 50 people. They were accused of “disturbing the peace” by the state media. In addition, the Vietnamese authorities once again warned against the continuation of the demonstrations, as they had been instigated by “enemy forces” inside and outside Vietnam in order to cause discord.

The restrictive measures continued in 2012. In October 2012, two musicians in Ho Chi Minh City were sentenced to several years in prison because their songs allegedly contained propaganda against the government and Hanoi’s policies towards China. In January 2013 13 people received prison sentences, some of them long – among other things for alleged relationships with the exile party “Viet Tan”. In another trial in Phu Yen Province that began in February 2013, 22 activists were charged with plotting to overthrow the government. They received prison terms ranging from 10 years to life.

According to computergees, the fact is that the Vietnamese leadership has had to reverse decisions in several cases over the past few years due to public protests, usually using social media such as Facebook. One example was the Hanoi city council’s plan to cut down allegedly diseased trees on a large scale in 2015. After the deforestation operation was stopped, however, the security apparatus also became active to prevent further discussion on the subject.

In the spring of 2016, the mass fish deaths in central Vietnam became the dominant domestic political issue. Demonstrations urging the government to act more decisively and to raise awareness of the problem of food contamination in general were forcibly broken up by a large police force but continued through 2016. This not only reflects the dissatisfaction of the local population with the inadequate compensation, but also a heightened environmental awareness that has developed, especially in the ever-growing middle class. Subsequently arrested the security authorities, however, some people who were involved in actions against the mass fish deaths. The state authorities are thus being accused of defending foreign companies that produce in Vietnam at the expense of the environment against domestic critics. The extent to which the protest movement that has now emerged represents a challenge for the leadership in Hanoi is controversially discussed by experts. However, it is undisputed that the protests are not only regional in character and have become more self-confident.

In April 2017, an environmental organization called “Green Trees” called for control of the payment of compensation payments to those affected by the mass fish deaths – an indication of the increasing self-confidence of civil society in Vietnam. In another case, villagers at a foreign textile factory in Hai Duong province in the Red River Delta accused of improperly draining residues and thus polluting the surrounding rivers. To express their protest, they have been blocking the factory since April 2017.

However, the Vietnamese security apparatus is skeptical about building a civil society. For example, a seminar on civil society issues in Ho Chi Minh City in December 2016 was violently broken up.

The Vietnamese security apparatus has arrested 15 critics since the beginning of 2017 – more than in previous years. One reason for this may be the Trump administration’s lack of interest in human rights issues.

The crackdown on critics of the regime continued in 2018. In April, well-known human rights lawyer Nguyen Van Dai was sentenced to 15 years in prison for allegedly plotting to overthrow. Other members of the “Brotherhood for Democracy” he founded are imprisoned for 7 to 12 years.

In September 2018, Nguyen Trung Truc, a spokesman for the Brotherhood for Democracy, was sentenced to 12 years in prison, followed by 5 years under house arrest.

The repressive line of the Vietnamese security apparatus is supported by the nationalist “Red Flag Movement”. This is primarily active on the Internet, but does not shy away from physical intimidation attempts by liberal regime critics.

At major political events such as the summit meeting of US President Trump and Kim Jung Un in Hanoi in February 2019 in Hanoi, control measures against dissidents are routinely tightened.

The arrests of critical bloggers and employees of independent political groups continued in 2020. In May, for example, the blogger Pham Chi Thanh, who had criticized party leader Nguyen Phu Trong, was arrested. One reason for his arrest was his close association with the independent Liberal Publishing House. A few days later, Nguyen Tuong Thuy, chairman of an independent journalists’ association, was arrested. In June, several activists of the ” constitutional group ” (Hiến Pháp), who invoke the fundamental rights enshrined in the 2013 constitution, were sentenced to several years in prison. in Ho Chi Minh City. The increased crackdown on critics of the regime is also related to the upcoming party congress of the CP of Vietnam. 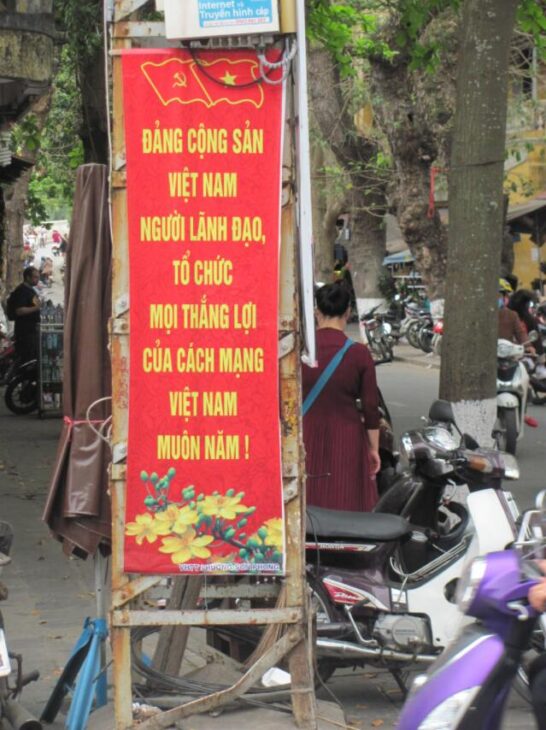