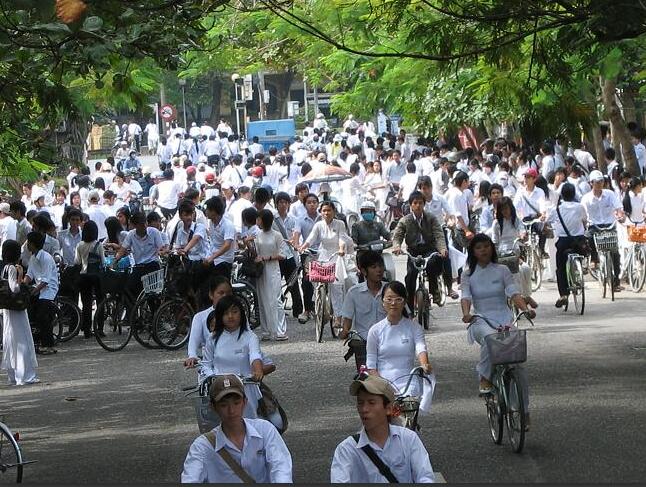 Vietnam has a very strong educational tradition and can point to a high literacy rate and – at least in primary schools – high school attendance. Despite all the successes, there are still regional differences in access to educational institutions.

According to politicsezine, the Vietnamese education system also faces other problems. The pronounced “thirst for education” and the ambition of the parents lead every year to a run on the Vietnamese universities, which they cannot cope with. The pressure on the students is enormous. Suicides occur every year among those who fail the mandatory entrance exams and thus cannot get any of the coveted study places. “Irregularities” in incoming inspections are widespread. The government is stepping up action against the widespread “cheating” in schools and universities. Overall there is corruption widely used in many schools and universities in Vietnam. In 2018, for example, one of the biggest corruption scandals of the last 10 years was uncovered in the province of Son La: In many cases, responsible cadres had manipulated the results of the entrance exams for the university. Similar cases were later reported in other provinces in the north.

The education system is also suffering from outdated teaching methods. For example, Vietnam performed exceptionally well in some subjects such as mathematics in the 2012 Pisa survey, but the excellent results masked structural problems in the Vietnamese education system such as the lack of encouragement of creative thinking in the classroom and training that missed the needs of the labor market. The Vietnamese government has long been trying to solve these problems through broad-based reforms – for example in higher education.

This is one of the reasons why the children of the newly rich Vietnamese are increasingly learning and studying abroad, for example in Hong Kong. However, a real educational exodus is taking place from Vietnam to Australia, the USA and Great Britain.

Vocational training is only beginning to exist in Vietnam, informal training dominates.

The educational tradition is also reflected in the above-average school performance of Vietnamese-born students in Germany. This often gives them the recognition that their parents, who often have a high level of education but have to work outside of their actual professional background, are denied.

The violation of human rights in Vietnam is denounced by organizations such as Amnesty International, Human Rights Watch and the Bureau of Democracy, Human Rights and Labor of the US State Department. The fundamental rights are set out in the Vietnamese constitution (Articles 49-82), but they must not be “abused”. The Vietnamese judiciary uses these restrictions to take action against unpopular critics. Another important source on the human rights situation in Vietnam are the reports of the UN High Commissioner for Human Rights.

Human rights organizations, for example, condemn the widespread brutal police crackdown on citizens in Vietnam. When a 21-year-old boy died in custody under unexplained circumstances in July 2010 in Bac Giang in north-east Vietnam – he was arrested for not wearing a helmet on the moped – there were demonstrations in front of the local people’s committee.

In November 2013, the case of Nguyen Thanh Chan, who was wrongly sentenced to life imprisonment in a murder case, shed telling light on the functioning of the Vietnamese legal system: after ten years the real murderer was caught, the innocent imprisoned Nguyen Thanh Chan was released released immediately. The latter, however, stated that he had taken the blame for the crime he had not committed because he had been beaten during interrogations after his arrest and had been “softened” with sleep deprivation. In 2015, Nguyen Thanh Chan was awarded a large amount of compensation.

2015 ratified the UN Convention Against Torture Vietnam, but is according to a report by Amnesty International in Vietnam against political prisoners still torture applied.

The death penalty is still imposed in Vietnam – although the number of such crimes has been reduced in recent years. Since 2011, the shooting of those sentenced to death, which was customary in Vietnam until then, is to be replaced by lethal injection. Since Vietnam itself was initially unable to produce the poison in question and the EU banned the export of the corresponding substances, the executions had to be suspended. After a two-year hiatus, the first execution took place in Vietnam in August 2013 by lethal injection – following a change in the law, poison that is produced in Vietnam or outside the EU can now also be used. According to reports in the Vietnamese media, a total of 429 death sentences were carried out in Vietnam between August 2013 and June 2016.

In January 2014, 30 (!) Defendants were sentenced to death in the largest trial to date against a drug smuggling ring. In a similar drug trial in January 2015, the death penalty was imposed eight times and in February 2017 nine times; in two further trials thirteen times in November 2018 and ten times in May 2019.

According to a report by “Human Rights Watch”, the Vietnamese security authorities are increasingly using thugs to intimidate unpopular critics such as bloggers.

In June 2018, lawyer Nguyen Van Dai, who had been sentenced to 15 years in prison and 5 years of house arrest in April, was deported to Germany with his wife and another activist.