In Vietnam there are 54 officially recognized ethnic groups, but a large majority, almost nine out of ten residents, belong to the Viet people (also called kinh). Viet dominates politically, economically and culturally. The country’s previously high Population growth has now slowed down.

Vietnam previously ran a tough family planning to bring down the high birth rates. Parents with more than two children risked criminal penalties or dismissal from government services. When the child restriction was abolished in 2003, childbearing had dropped from almost 7 children per woman in the 1970s to 2.3. Nowadays, the figure is 2.0. 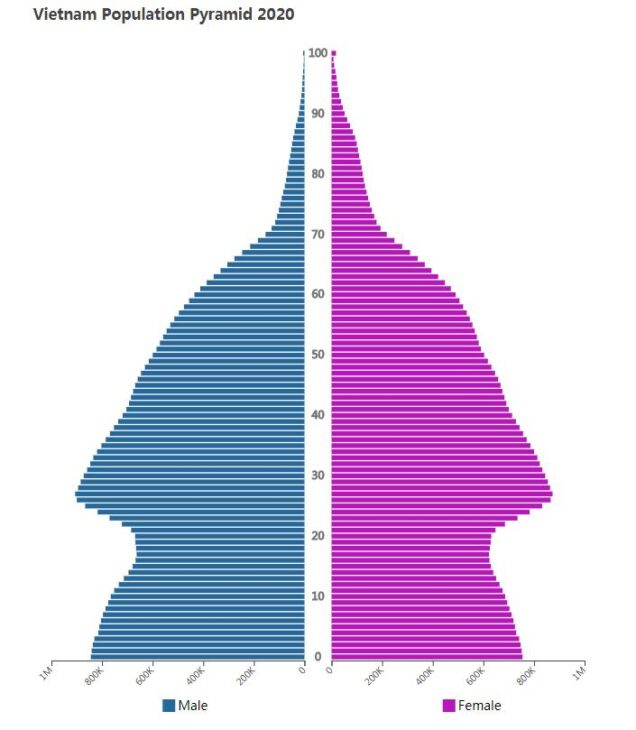 The population is unevenly distributed within the country. In the delta area in the north, more than 1,000 people per square kilometer live in their quarters. It is close between the residents also in the Mekong Delta and along the narrow coastal strip, while the hinterland is sparsely populated. Immigration of mainly young people to the cities has increased rapidly since the early 1990s. One third of the population is now urban residents.

The majority people believed to be a fusion of Australoid, Melanesian and Indonesian peoples, who inhabited the area since the Stone Age, as well as South Chinese who immigrated during the Late Bronze Age.

In Vietnam there are also some 60 minority people living mainly in the mountain areas. The small mountain people are commonly called montagnards (mountain dwellers in French). They are largely Protestant and were used as mercenaries by French and Americans during the liberation wars of the 1950s and 1960s (see Modern History). This has created contradictions between Montagnards and the Viet people.

Some of the minority people have over one million members: tai and the related thai as well as muong, khmer and hmong. Others comprise a few thousand people or fewer. The recognized minority people have a legal right to practice their culture and use their language in school, but this is not always respected in practice.

Some minorities live in nomadic life and practice burning. These peoples have been displaced by the millions of whites who in recent decades have moved from the densely populated lowlands to the highlands to grow in the economic zones created there. The Swede farmers feel deprived of their land and consider themselves religiously oppressed. Severe unrest, which periodically erupted in the central highlands, has had its background in this contradiction. There are small groups of Montagnards who fight for independence for the Protestant mountain people. They want to form their own state, but the struggle is met with fierce opposition from the authorities.

Two major minority people living outside the mountains are Hoa (Chinese) and Khmer. The Chinese are largely concentrated in Cholon, part of Ho Chi Minh City in the south. They mainly dominated the economy of southern Vietnam until the reunification in 1975, but were then subjected to persecution. Hundreds of thousands of Chinese were forced to leave the country in the 1970s and 1980s, often as boat refugees (see Modern History). Officially there were just over 800,000 hay in the country at a census in 2009, but it is now uncertain how many of them are left when the emigration has been great.

Vietnam’s Khmer lives mainly in the Mekong delta in the south, which was previously part of the Khmer kingdom (see Older history). They are currently estimated at around 600,000. In the Mekong Delta there are also thousands of stateless refugees from Cambodia.

More than 4 million Vietnamese are expected to live abroad. Most fled after the country’s reunification in the mid-1970s, or are children of those who left. Almost half live in the United States and the second most are in Cambodia. France, Taiwan and Australia also have many Vietnamese.

Vietnamese, or kinh, is the official language of the country. It belongs to the Austro-Asian languages, but is influenced by both Chinese and Thai languages. The Chinese writing characters used earlier were forced out of the Latin alphabet in the early 1900s. Vietnamese is a monolingual language with six tones. Each syllable or word can have six different meanings depending on the intonation. The notes are highlighted in writing with diacritical characters (different types of accents).

There are at least about 30 different minority languages. The largest groups are Monkhmian and Malay Polynesian languages. Well-educated older Vietnamese still speak French. In southern Vietnam, the English spread during the war until 1973. Subsequently, Russian became the most important foreign language. Now English has taken over again, even in the north.

China and Vietnam resolve a border dispute, close to 30 years after the 1979 war.

Journalists are imprisoned after revelations

Two journalists, from the newspapers Thanh Nien and Truoi Tre, are being tried in court after revealing the corruption in the Ministry of Transport. Nguyen Viet Chin is sentenced to two years in prison while Nguyen Van Hai escapes jail after pleading guilty. The judges raise sharp criticism in the outside world.

Minister of Transport in corruption

The Minister of Transport is dismissed for his role in a major corruption scandal.

Blogger Nguyen Van Hai – also known as Dieu Cay – is arrested, accused of propaganda against the state. Among other things, he has written about corruption and about protests against China.